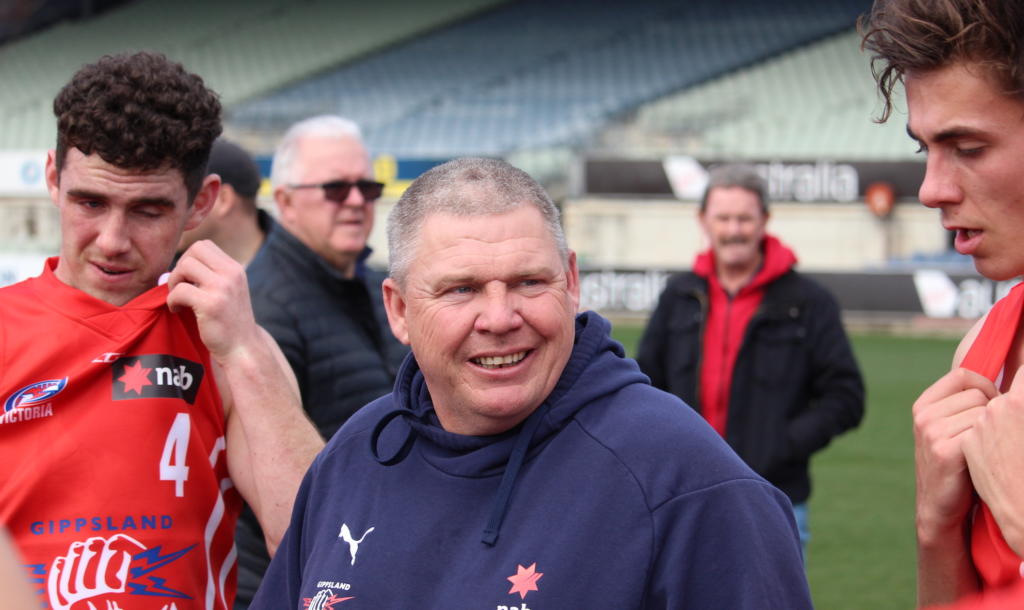 LOFTY standards have been set at Gippsland Power after a year full of success, with memorable legacies left by key program components both on and off the field in 2019. A rare crop of talent saw the Power have a real premiership tilt and seven players drafted, marking a fitting end to revered Talent Manager Peter Francis‘ 25 years in the job. But the Morwell-based outfit will be in good hands moving forward, with long-time assistant coach Scott McDougal transitioning into the coordinator role with help from his predecessor. Acknowledging the success of last year while also looking to make his own mark along with a fresh list of players, McDougal is settling into the new role in time.

“(2019) was a very exciting season and a positive one for the club, it’s not often that you get a glut of that talent come through at once,” McDougal said. “You wouldn’t have known that they were any more talented than others in the way they conducted themselves, they were really, really professional about it and it sort of showed throughout. “They dealt with a lot of challenges and they got the most out of the season that they could.”

The shift of roles has been made easier for McDougal given Francis’ guiding hand during the off-season, with the difference in mindset between coach and coordinator becoming clear after 10 years in the former caper.

“It was a really good outcome for Pete in his last year and it was good to be around and involved, I sort of started full-time with Pete the week after the AFL Grand Final and he guided me and showed me the ropes for a month so that was really, really helpful,” he said. “I’ve also got him on speed dial in case anything out of the blue comes up, he’s quite willing to help… I know a lot of the background workings of the organisation, it’s now the integration with head office that – that’s the part that I wasn’t aware of which Pete’s helping me with.”

“The first meeting was challenging because you feel you’re still thinking a little bit like a coach,” he said. “After you sit back and reflect on what you wanted as a coach, what support levels you wanted, how you wanted to be able to organise yourself in your time to get the most out of your part of a session – that’s where I think having that time as an assistant coach, I’ve drawn a line and I’m no longer a coach. “I’m now here to support the coaches to get them to develop just like it our players. “Coaches need to develop and get opportunities to improve otherwise, you’re just standing still – if you’re standing still you’ve gone backwards”.

Getting the best out of those at your disposal is also something McDougal and his coaches will be looking to do in terms of this year’s player crop, with three talented prospects – Ryan Angwin, Sam Berry, and Zach Reid – knocking around the Vic Country hub and all impressing during pre-season amid their come-up. Having each consistently played alongside high-end talent in the form of Caleb Serong, Sam Flanders, and Brock Smith as bottom-agers for the Power, McDougal said that kind of experience allowed the Gippsland program to get the best kids on the right track.

“A lot of that talent comes down to DNA, it’s who comes through your doors and it’s how much you can develop,” he said. “Like with any part of this program, it’s about getting the most out of what’s there and individual development rather than actually tracking a win-loss mentality. “So for a bottom age boy like Sam Berry to have an impact every time he played was really important for us. “For a kid from Foster Ryan Angwin… to now be in (the Vic Country hub), his development is way way greater than say somebody like Sam Flanders who came in really high and has improved along the way. “Ryan’s come from nowhere and now he’s recognised by getting a spot on the Vic Country hub, so they’re exciting to see those guys and where they track now.

A bulked-up Angwin in particular has impressed McDougall since entering the program “skinny as a whip” with no expectations, primed to have his magnet shuffled like many of the Gippsland top-agers coming into 2020, and likened in style to Power graduate, Xavier Duursma. With the talent in some players abundant, the Power is also set to continue its focus on fundamentals to ensure it does not go to waste.

“We know that they can play so we go through a really extensive selection process where we train a lot of fundamental training; ground balls and our handballs, kicking skills, all the all the things – it’s not just fitness and running and physique and weights, and it’s more about the fundamentals,” McDougal said. “With a kid like Ryan, his clean hands below his knees are exceptional. “His ability to work on his deficiencies, ie., his body shape and size out away from the club is where he’s made his improvement, so when you see them working on things, and then all of a sudden they can impact the game… that’s where we get the most pleasure. “I can see Ryan playing inside mid because he’s really good for a skinny kid, he’s got some really good contested traits. “He’s always first in, clean hands, (and) gives the ball with instinct to the right option nine times out of 10. “So he’ll get a taste inside and he’ll play a lot outside because of his physical attributes of pace and a nice left foot.”

Angwin’s steep rate of development is not something lost on others in the squad either, Jai Newcombe – a 19-year-old prospect who comes in having been cut at the last hurdle for three consecutive preseasons – has transformed since last training at the club, and is set to become a key feature in the Power’s engine room.

“He went away, Jai Newcombe, played the season of footy for Poowong’s seniors,” McDougal said “He also played a couple of games at school footy then halfway through the season, he sort of left school and got a job. “He grew, filled out and became a powerful athlete from when we saw him the Christmas before so he’s been invited back as a 19-year-old and hasn’t put a foot wrong all pre-season. “He is just a powerful inside mid, dominated a couple of intra club practice matches that we had pre-Christmas so I’m really looking forward to seeing how we can get him involved post-Christmas into this pre-season and see how far he can improve.”

Jack Hume and Zac Skinner are two others who may feature as over-agers for Gippsland in 2020, with VFL interest now key in allowing players to gain that second opportunity at NAB League level. McDougal says the door is always open for kids who may turn the corner quickly, with the rates of development usually drastically different between taller and smaller players. Mindset and an environment clear of any high-stake expectations are most important for McDougal and his chargers heading into 2020, just looking to do the best they can at all times.

“It’s always been about making the kids feel welcome, belonging in this environment, challenging them with their work and with new ways of thinking, but always being there to support them and their families through the process,” he said. “Footy is the game that that can give you the most fun and pleasure and it can also kick you in the bum pretty hard at times, and it’s a real replication of what happens in the real world with life. “You’re not always going to get the results that you want but you’ll definitely not get them if you don’t participate along the way and be the best that you can be. “That’s our lesson to all the boys and all the coaches and all the staff and everyone involved in the place – there’s no win loss, there’s no expectation, we just try our best at all times to be the best we can be, on field and off field.”

The Power are set to open the 2020 NAB League season in their clash against Murray Bushrangers at Trevor Barker Oval on Saturday, March 21.