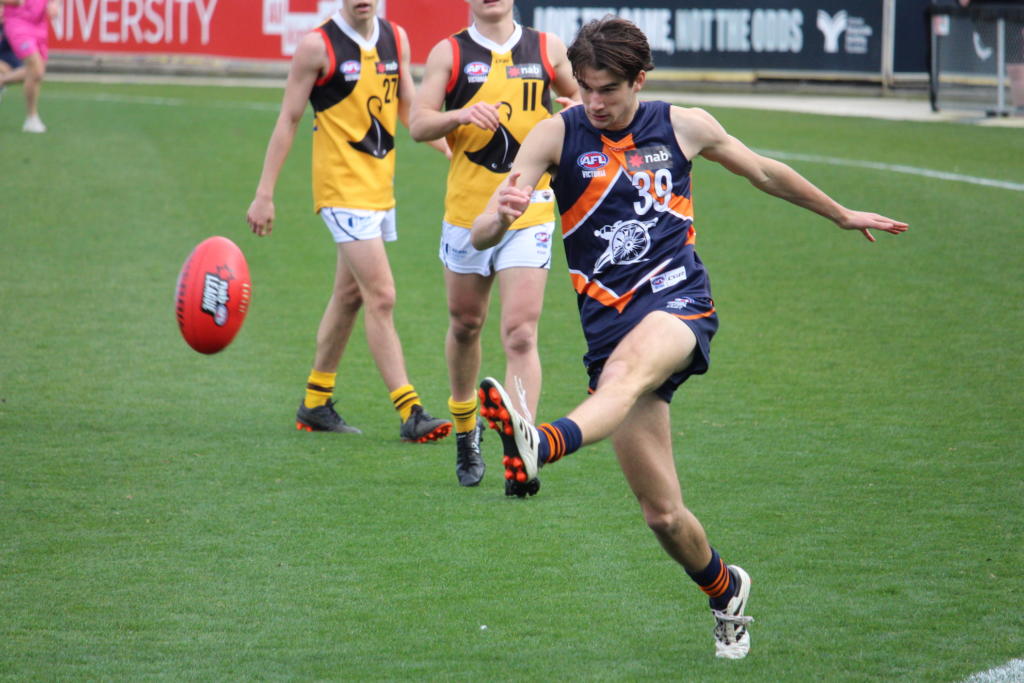 TWO surprise success stories out of last year’s draft were that of Calder Cannons graduates Francis Evans and Lachlan Gollant, selected by Geelong and Adelaide respectively as raw project players who only entered the Cannons’ program mid-to-late-2019. With the slate of a strong top-age group all-but wiped clean heading into 2020, Calder talent manager Tom Lonergan says his squad will be better for having given bottom-agers ample opportunity and the “fluid” nature of the Cannons’ list strategy.

“I guess the whole list management strategy is to know when the right time is to play your top-age kids and give them a really good go, but also towards the middle and back half of the year it’s time to see some new faces and we were able to transition some 16-year-olds into the team which was really pleasing,” Lonergan said. “We had quite a few of them play one or more games which was really good.”

“We spoke to our recruiters and all the staff here want to keep our list really fluid and if we see someone that’s performing really, really well at local footy and who’s in our zone, we’re prepared to give them the chance to train and then play,” he said. “Francis was one who took that opportunity, albeit for only one and a half games, Lachie Gollant is another who came in during the middle of the year from his time at PEGS, was performing really well with PEGS and got his opportunity and took it with both hands and played really well – especially in the finals series. “So it can happen, it can happen really quickly and those guys are great examples of that.”

A 2019 flavour will also remain in this year’s squad, with a quartet of promising 19-year-olds set to split their time between local, VFL, and NAB League commitments. Lonergan hopes they can all take their games to the next level in hopes of maintaining AFL interest heard in “patches” last year.

“We’ve got Josh Hotchkin who’s a big 202cm ruckman who came in early in the year last year and is looking really fit,” he said. So we’re expecting him between – whether he plays with us or Coburg – to have a really good year. “Ben Overman‘s coming back, he had a really consistent year last year as a defender. “Nathan Stewart, who played a lot of his footy at Assumption (College) last year in Year 12, he’ll come back and Jake Sutton will come back. “All those guys had patches last year that got spoken about a bit come draft time but we’re hopeful they can take that next step this year. “Jake, Ben, and Josh are all with Coburg so they’ll be split between either here and their local clubs. “They’ve all completed a whole pre-season at Coburg and by all reports have done really well and they’re really enjoying their time there and can start their year off really well.”

As for the leading candidates among this year’s Cannons crop, Lonergan highlighted the four Vic Metro Hub members as ones to watch, with the versatile group set to lead a more consistent overall squad across various roles.

“The four kids in the Metro hub; Josh Eyre, Cody Brand, Jackson Cardillo, and Campbell Edwardes, they’re all set up to have really strong seasons,” he said. “They played a lot of footy as bottom-agers last year, some really good games. “The key for those guys is just consistency and we’ve got a couple of those guys who are injured at the moment but we’re hopeful we can get them up and going by Round 1. “They’re probably the (main) guys, there’s a few others who might pop up but we’ll obviously just wait and see.”

“Probably Brand is the only one who’s really settled as a key back, but he can go forward,” Lonergan said. “Josh is a big kid at 198cm, we played him back and forward last year but we’d like to settle him down forward once he gets his body right. “Campbell is really versatile, the wing position he made his own in the back half of last year. “We found it hard to find him a position he was really settled in but towards the end of the year the wing stood out to him and I think that’s where he feels most comfortable, but we’d like to see him inside at the centre bounce as well, he can play forward – he’s 195cm – so we’ll just have to wait and see. “And Cardillo obviously can play forward and midfield, so we’d like to think all those guys can play in multiple positions. “I think (the squad) will be quite consistent, we’ve got a lot of consistency across the group and we’re hoping a few guys can take the next step and really put their names into that draft conversation. “We think we’ll be thereabouts but I don’t know how the other regions are going at this point, we’re quietly confident.”

As for how the side will go about it in Round 1, Lonergan says the gameplan will be quite similar to year’s past, with a particular focus in the off-field realm on developing players into hardened competitors who prepare best on gameday.

The Cannons are set to begin their 2020 NAB League campaign against the Western Jets at Mars Stadium in Ballarat on Sunday, March 22 at 10am.