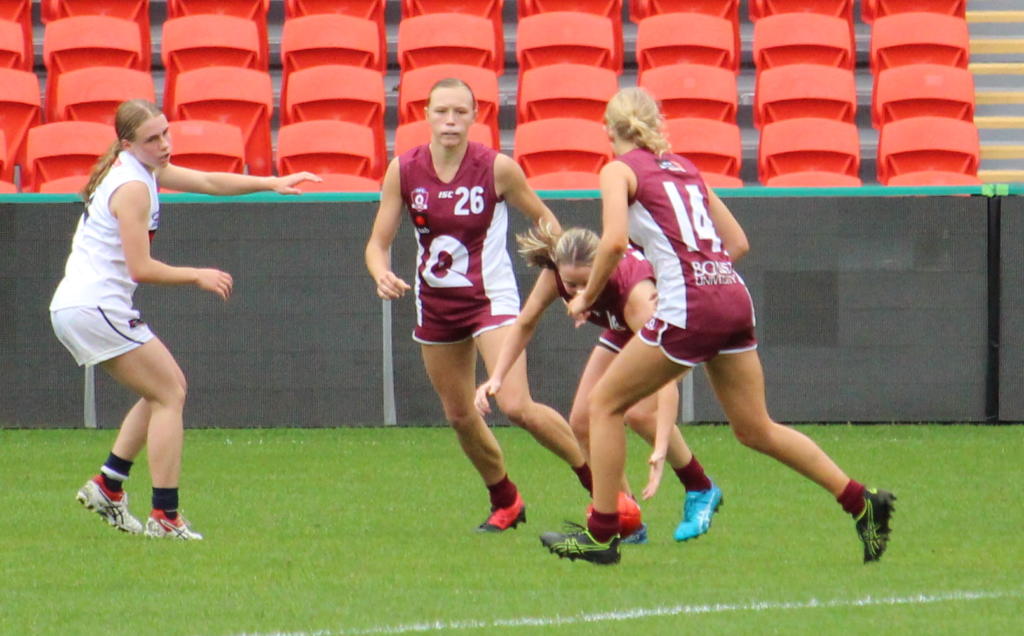 THREE teams still remain unbeaten in the Queensland Australian Football League Women’s (QAFLW) competition after Round 2 results. The only side to go down after a win in Round 1 was Wilston Grange who suffered defeat at the hands of Yeronga South Brisbane. The Devils remained undefeated in season 2020 along with Coolangatta Tweed and Maroochydore, whilst Bond University got on the board in convincing fashion.

In the opening match of the round, one goal umpire did not have much to do, as Coolangatta Tweed maintained their strong start to the season with a 27-point victory over Aspley Hornets. The wind-affected game meant one end of the ground did not see a single score all game, whilst all of the combined 8.11 went up the other end of the ground. Neither side could capitalise in the opening term with Aspley booting three behinds – the only scores of the quarter. The Bluebirds responded with the wind in the second term, adding 2.4 before the Hornets levelled the scores at the final break using the same wind. Despite the game being delicately poised at the last change, the Bluebirds took full advantage of the wind in the final term, piling on 4.3 to run out that exact score margin of 27 points. Brisbane Lions’ AFL Women’s duo Selena Priest (two goals) and Sally Riley (one) had an impact up forward, whilst Casey Samuels and Madeleine Resinger were named the best from the winning side. Michaela Campbell and Rachel Crawford both booted goals for the Hornets, while Courtney Daniec was the best for the losing side.

Yeronga South Brisbane maintained its undefeated start to the season with an impressive five-goal win over fellow Round 1 winner, Wilston Grange at home.The Devils held the Gorillas scoreless in the opening term, before the visitors fought back to cut the 19-point quarter time deficit to just 11 by the main break. Yeronga South Brisbane again held Wilston Grange scoreless after the half-time break, whilst adding 1.2 to extend the lead out to 19. Instead of allowing the Gorillas to hit back, the Devils booted the first three goals of the term to put away any thought of a comeback on their way to a 30-point victory. Madison Goodwin was one of Yeronga South Brisbane’s best, booting two goals alongside other multiple goalkickers, Natalie Thomas and Courtney McDonnell. Brisbane Lions’ duo, Lucy Bellinger and Gabby Collingwood both represented the Devils and booted goals, whilst Renee Cowan and Emmii-Lee Zanker-Close were named among the best. Sarah Fuller and Ellen Mizzi were deemed the Gorillas’ best in the win, whilst Kristen Tyquin and Kaitlyn Day were also impressive despite the loss.

Bond University bounced back from a shock loss in Round 1 to easily breeze past University of Queensland in Round 2. The Bull Sharks booted eight goals from 16 scoring shots to the Red Lionesses’ one behind during the 55-point smashing at home. The home side booted three goals in the opening term, and whilst the Red Lionesses managed to contain them after that with just five goals for the remainder of the game, the Bull Sharks were just too strong defensively and offensively. AFL Women’s National Academy Maddison Levi booted two goals in a best on ground performance, whilst Lydia Pingel also kicked a couple of majors. Brisbane Lions representative, Taylor Smith kicked a goal and looked impressive in the Bull Sharks win, whilst Shannon Danckert and Annie Muir also contributed well. For the Red Lionesses, Tiarna Jericho and Jessi Henning were nominated as the best for the losing side.

Maroochydore’s strong start to the season continued as well in Round 2 with a 16-point triumph over Coorparoo. In a see-sawing contest, the Kings led for the majority of the match, but a three goals to zero final term resulted in the Roos skipping away with the win. Coorparoo started well with two goals to one in the opening term, before the Roos hit back in the second quarter to only be a point behind at the main break. A titanic struggle ensued in the premiership quarter as the Kings extended the lead to two points as both sides booted a goal, before Maroochydore broke away with a three goals to zero final term to win, 7.3 (45) to 4.5 (29). Ashleigh Hales booted two goals in the win, while counterpart forward, Coorparoo’s Kelsey Crosbie also booted two majors. Tayla Gersch was named the Roos’ best in the win, while Ruby McDowell and Chloe Gregory both booted a goal and were instrumental in the victory. Cooparoo’s Jade Ellenger and Tahlia Hickie used their experience with the Brisbane side to be named the best two for the Kings, while Abbey Brokken was also among the top players on the ground.

Bond University’s flawless start to the season continued with a 76-point thrashing of University of Queensland, as the Bull Sharks kept their opposition from scoring two consecutive weeks. Lily Tarlinton booted three goals and was named among the best for the winners, as Montana Williams, Jasmyn Davidson and former South Australian Under-18 captain, Esther Boles all booting two majors as well. Georgia Hutton was named best on ground in the win, whilst Natalie Koehler and Portia Ward were among the best for the Red Lionesses. Also remaining undefeated was Yeronga South Brisbane by triumphing over Wilston Grange. After trailing by a goal at half-time, the Devils booted four goals to zero to run away with the contest by 19 points. Laura David (two goals) and Samantha Hopkin (one) starred in the Devils’ victory, whilst Rachel Fillmore and Montana Dove were strong for the Gorillas.

In the other two games, Maroochydore won by eight points over Coorparoo in a low-scoring contest. The Roos were held scoreless for the first half, but booted two third quarter goals whilst keeping the Kings scoreless after quarter time. It was enough to get the win in a 2.2 (14) to 1.0 (6) match, with Taylah Whitehead and Zoe Smith the two goalkickers for the winners. Angela Doyle was named the best for the Roos in the win, whilst Renee Keith and Renee Teys were both impressive for the Kings. Finally, Coolangatta Tweed got up by 35 points over Aspley Hornets in a 7.13 (55) to 3.2 (20) at home. Neesa Doyle kicked two goals in a best on ground performance for the Bluebirds, whilst Faith Alchin also snagged a couple of majors and stood out in the victory. Carissa Jordan kicked two goals for the Hornets during the loss, while Kathleen Page and Jordan McConnell were both among the best in the loss.