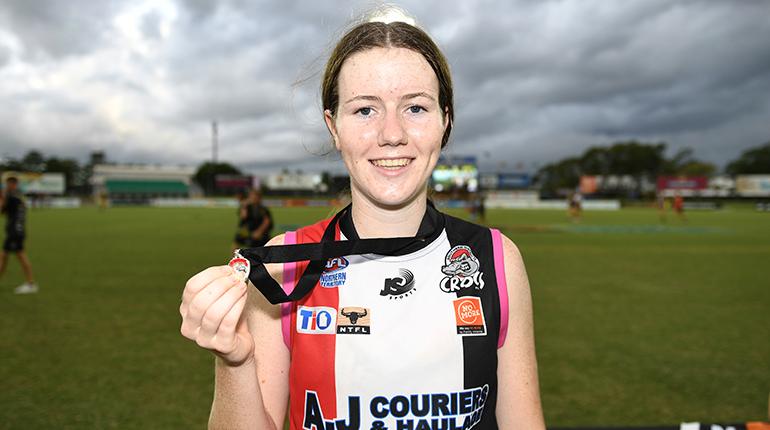 A THREE goal final quarter saw the Southern Districts defeat Waratah in the 2019/20 Northern Territory Football League (NTFL) Women’s Premier League Grand Final on Saturday afternoon, with the Districts reigning supreme in their inaugural grand final victory, 6.3 (39) to 3.3 (21). A dominant finals series saw the Southern Districts come in favourites over Waratah, and while their first grand final victory did not come easy, neither did the Districts, contesting at every opportunity.

While the Crocs came out on top every other time they played the Warriors during the 2019/20 season, Waratah came out firing with pressure on every ball making it tough for Districts to find much purchase early, peppering the scoreboard with behinds. Jenna Singh was on song early through the midfield, with her persistent pressure creating opportunities for the ‘Tahs. An inside 50 from Singh almost saw Waratah boot the opening goal with a nice crumb and chase from Breanna Martin but Rhiannon Busch was on the prowl, smothering a certain goal. Districts clapped back immediately with a play down the guts, with young-gun 16-year-old Grace Mulvahil bringing the ball to ground and shepherding her player to open up space for leading goalkicker Ebony Miller, booting the opening goal of the match.

Mulvahil continued her dominant ways in the second, booting her first of two for the day and proving a crucial member of the Districts lineup. While Waratah continued to trail, a valuable goal to Lauren O’Shea opened up the match giving the side a boost heading into half time. The Warriors were quick to get going after the main break, ready to give Districts a run for their money after a sloppy first half. A tackle inside 50 from Amy Chittick set up an impressive forward foray from the Warriors with speedster Madison Yarran crumbing well and kicking towards goal, with Simone Nalder’s good positioning and clean hands at the end of it on the goal line, playing on quickly to see Waratah take a one-point lead, and their first lead for the match.

The see-sawing affair saw Mulvahil kick a beauty to take back the lead, with the youngster rewarded for backing up her efforts further up the ground, tackling well and proving her dominance even on the big stage. A goal from Yarran not long after put Waratah back in front, with the classy forward showing some terrific skill with an around the corner snap on goal hitting the target perfectly. Yarran’s goal saw Waratah’s scoring well and truly dry up however, taking a one-point lead into the final term but unable to apply scoreboard pressure in the final term.

Despite going into the last quarter down by one point, Districts all but ran away with it, booting three goals – one each to Bella Clarke, Kelsey Patterson and Mickaela Derschow – and running circles around Waratah’s defence which had held up well early but was unable to hold up against the Crocs onslaught. Despite the loss, Waratah’s excitement machines in Lisa Roberts, Yarran and Chittick held up well with the side’s composure and persistence on the ground ball proving why the Warriors were so dominant this season.

Young-gun, Mulvahil was awarded the Williams Medal for the Best On Ground, also picking up the 2019/20 Women’s Rising Star Award for her efforts this season. Miller’s first quarter goal cemented a massive season for the key-position-player, nabbing the Women’s Leading Goalkicker Award for her efforts with 59 goals this season while Roberts won her second Gwynne Medal, picking up a record breaking 37 votes thanks to her ability to impact the contest anywhere around the field.