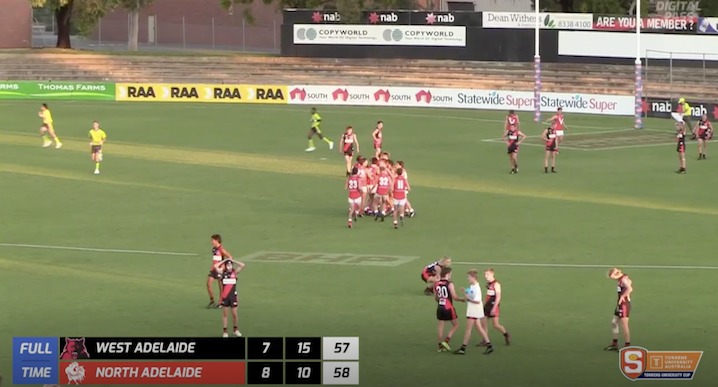 IT was a weekend full of nail-biters and blowouts as the South Australian National Football League (SANFL) Torrens University Under-16 competition kicked off under lights on Friday night. The reigning premiers Glenelg made light work of Central District whilst Norwood easily accounted for South Adelaide in a battle of last year’s preliminary finalists. North Adelaide prevailed in a Hisense Arena thriller and on Saturday morning, Sturt opened their 2020 account with a come-from-behind triumph over Woodville-West Torrens at Thebarton Oval.

Having led all night, West Adelaide could be forgiven for feeling as if they were robbed by the Roosters. However, as all good sides do, North Adelaide capitalised on the Bloods inaccurate kicking in-front of the sticks to start 2020 in the good books. After compiling three majors to one early in the final term, North squared things up late when Isaac Keeler booted his second. Kelsey Rypstra’s behind at the 20-minute mark broke the deadlock, handing the red and white their first lead of the game and opening win of the year. William Dowling was the Roosters best player with 33 touches, six marks and four tackles. However it was his seven inside 50s which proved most valuable in the victory. Harper Montgomery, son of Power premiership player Brett, proved a dangerous aerial threat all day, finishing with a goal and seven marks. Luke Harvey was integral in launching counter-attacks for North Adelaide, amassing seven rebound 50s, whilst Max Blacker worked hard all day to finish with 25 touches, three marks, four tackles and four inside 50s. Although inefficient in-front of goal, West Adelaide leader Kobe Ryan was the games most prolific, amassing 36 possessions and six marks (two contested). Skipper and state representative Tyson Coe was at his bullish best in the engine room, accumulating 34 disposals along with seven marks, six tackles and six clearances in the loss.

At Coopers Stadium, the Redlegs looked the better team from the opening bounce and never surrendered the lead. Two goal efforts from Beau Baldwin, Taj Rahui and Darcy Emerson laid the foundation for the victory, as Norwood eclipsed their southern rivals in nearly all of the vital statistical categories. Riley Verrall collected 25 disposals, five marks, six tackles, seven clearances and an impressive eight inside 50s in a well-rounded performance. He was aided by the strong tackling of Tyson Walls (23 disposals and 10 tackles), Max Kelly (24 disposals and seven tackles) and Luke Signorello (14 disposals and eight tackles). Tall, Frank Packer took eight marks and hit the scoreboard with a major. For the Panthers, talented midfielder Jaiden Magor was ultra-impressive in defeat, amassing a stat-line consisting of 33 touches, 10 marks, two tackles, eight clearances, six inside 50s and five rebound 50s. The next highest possession getter for South was Milan Spring with 15. Jye Bottroff won the ruck contest to finish with 24 hit-outs and forward Jack Delean booted three goals from limited opportunities.

In similar fashion to the Roosters victory the night before, Sturt’s fourth-quarter rally saw them head home from Thebarton Oval with their heads held high despite goal kicking inaccuracy. Thomas Byun put Sturt in front and ultimately sealed the deal with mere minutes left. The Double Blues spirited fight-back was led by the persistent defensive pressure of Nick Sadler, who finished the game with 10 tackles and eight clearances from 21 disposals. Cormac Dwyer and Michael Wilden each booted 2.1 as Blake Fidge’s 1.4, whilst inefficient, perhaps proved vital in the win. Mitchell Felton was excellent around the stoppages, extracting 10 clearances from 26 touches. Adam D’Aloia was best-on-ground for the Eagles, producing a well-rounded stat-line including 34 disposals, five marks, five tackles and seven clearances. He kept his side ahead with a goal late in the frame which ultimately proved ineffective. Samuel Harnas kicked three majors for the Eagles and utility Hunter Carter, son of former-Power player Stephen, contributed two. Blake Hansen also collected 32 disposals including 28 kicks.

Round two unfolds next Sunday when South Adelaide hosts North Adelaide, before Woodville-West Torrens clash with South Adelaide in game two of a Flinders University Stadium double-header. Sturt travels north to face Central District at Elizabeth, whilst West Adelaide traverses the width of the city to do battle with Norwood.