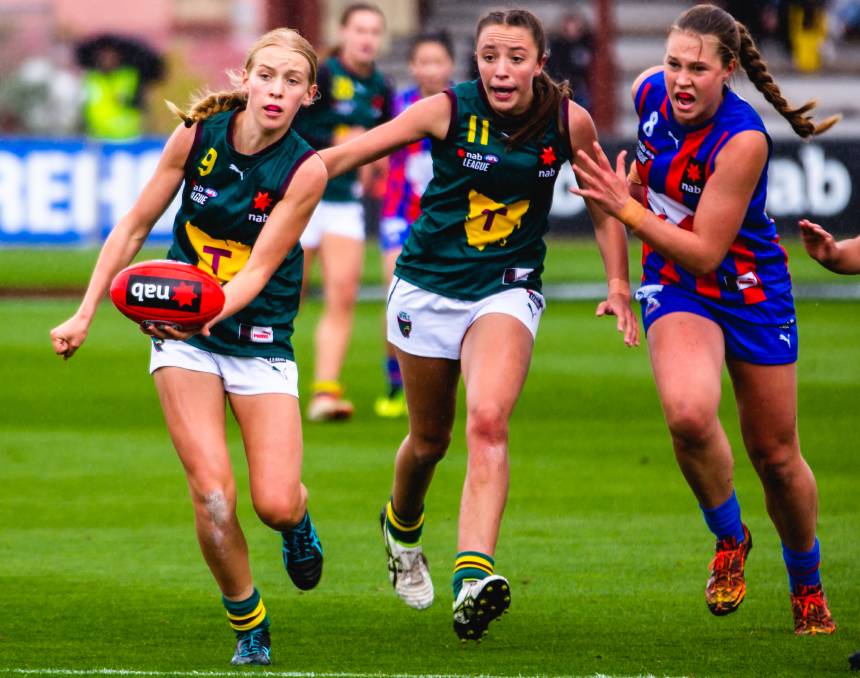 OAKLEIGH Chargers flexed their NAB League Girls title-contending muscles in Tasmania Devils’ inaugural match, winning by a record 102 points at the picturesque North Hobart Oval on Saturday. Despite the Devils never giving up and constantly harassing the opposition with great defensive pressure, the result was never in doubt from the second term when the Chargers piled on seven consecutive goals on their way to a 16.8 (104) to 0.2 (2) victory.

The opening nine minutes were quite competitive with both sides having a crack and the Devils restraining the high-scoring Chargers with fierce tackling and working hard with their positioning, leading at one stage with two early behinds to one. Tasmania was doing well in the ruck thanks to Kara Hennessy, but were struggling to get it past halfway after that start. Amy Prokopiec did well one-on-one deep to knock a ball out of bounds deep in defence to save a goal. After a missed snap shortly after, Oakleigh finally broke through for the opener of the game in the tenth minute with a great snap off Mia Clift from a contest. Despite Tasmania for the most part keeping the Chargers at bay, Oakleigh’s relentless attack eventually paid dividends, with Lucja Boyd-Singer kicking a ripping goal out of nothing off a pack on the tightest of angles a few minutes out in the last couple of minutes of the term. Tasmania’s endeavour was terrific, but with Oakleigh’s pressure now matching the Devils, the execution still needed work and that was the difference between the two sides. In the end the Chargers led by two goals in a quarter that both sides could be pleased with given the Devils had held them up for the majority of the term, whilst Oakleigh had finally got reward for effort in the last six minutes.

Whilst the Devils waited almost 10 minutes for their first goal in the opening term, they waited less than a minute for Eliza James to convert a set shot from close range. It was the work of captain, Mimi Hill who side-stepped an opponent and kicked to James’ advantage just outside the goalsquare. Less than a minute later a second goal was on the board and Taylah Morton had her first by shrugging off an opponent and kicking truly on the run. Some great defensive work from Stella Reid won the ball back with a forward 50 tackle and it was almost snapped up with an intercept mark by Liana Freestone but it bounced off her hands to the fortunate Rianna Thiele who needed a few steps and snapped around her body for another and all of a sudden the margin was out to 30 points just five minutes into the second quarter. Soon Reid was paid off for her hard work with a goal of her own off the left boot after Boyd-Singer handballed to her in space and she nailed it without hesitation. Good positioning from Charlie Rowbottom earned her a free kick 15m out from goal after a stray arm caught her high and Oakleigh’s seventh major was on the board at the eighth minute mark of the quarter. Reid had a chance for another but rushed the kick and put it through for a behind, but fortunately had another chance just seconds later where the ball floated into the forward line where she happened to be standing and she marked and goaled. The last five minutes of the term was well defended by the Devils and it took a special effort from Rowbottom again to stand her ground and put one through deep in the pocket despite being dragged down by her Devils’ opponent. The Chargers scored just one more behind – a rushed snap from James – for the term, and already had an imposing total to their name at 9.4 (58) to 0.2 (2).

The signs were ominous early in the third of the trend continuing with Morton having an early snap but was bumped off it for just one behind. The ball continued to spiral in and full credit to Prokopiec whose running in the defensive goalsquare saved what looked like a certain Chargers goal by nullifying the contest and forcing a ball-up. Moments later Morton received a free kick 35m out straight in front and it never looked like missing with the forward putting it straight through for her second just three and a half minutes into the term. Despite the scoreboard overwhelmingly in the visitors favour, Tasmania’s desire and desperation never wavered and it took the Chargers some special efforts to score with an unbelievable snap from Amanda Ling on the boundary which sailed through for Oakleigh’s eleventh with still nine minutes remaining in the third term. The likes of Camilla Taylor and Jemma Webster were trying to create some movement out of defence with the pair combining through Taylor’s hitout to the running Webster kicking long down the wing. Whilst it may not have amounted to anything it is these little passages of play that suggest with more experience the Devils will be an exciting team. Another goal-saving tackle from the Devils, this time from Jemma Blair – who was a little unlucky not be rewarded – showed the desire was still there and the Chargers could not just waltz away with the win. Hill almost drilled one home for her side off a terrific running play but it drifted to the left. Less than a minute later however, Sarah Morley added her name to the goalkickers list with a nice passage of play and kick off a few steps for the Chargers’ twelfth. To close out the quarter the Devils again held firm defensively and restricted the Chargers from scoring.

The final term got underway with the Chargers leading by 77 points and no doubt eyeing off the potential of a triple-figure score. The Devils’ defensive pressure was not going to make it easy for them with often multiple players wrapping up their Chargers’ opponents. Another special effort from Morton off a step with a neat snap brought up her third of the contest around the same time as she had converted her second in the last term. A fortunate ball over the back of a pack midway through the term handed Thiele her second goal in a monty with a soccer off the ground from point blank. A courageous marking attempt from Webster would not have gone unnoticed from her teammates in the middle of the ground, putting her body on the line to spoil and force a turnover from her opponent. Despite getting the ball to half-forward, Oakleigh went end-to-end and Ling kicked her second off a quick set shot and the Chargers were 96 points up with three and a half minutes remaining. Even with two and a half minutes left, Angelica Clark ran down Hill who was charging forward to boot long inside 50 and then an equally impressive effort deep in the forward pocket from Perri King almost created a scoring chance but the kick inboard unluckily bounced off Olivia Smith’s hands and the Chargers cleared it. In the last minute of play the ball went forward and finding space was Morley who took a step and snapped a goal to bring up the ton and help Oakleigh to a 102-point victory.

Hill finished the match with a game-high 20 disposals and two inside 50s finding plenty of it in close, whilst Rowbottom was the top player on the ground with 17 touches, three marks, five tackles, three inside 50s and two goals. Thiele also booted a couple of majors off 15 touches and laid eight tackles, whilst Morton ended up with three goals from five scoring shots to go with 12 touches and three tackles. Ling had 14 touches and three inside 50s to go with two goals, whilst Kalarni Kearns finished with 19 hitouts to accompany 11 disposals. For the Devils, Prokopiec worked hard on the last line and had a team-high nine disposals, two inside 50s and three rebounds, while Webster showed some dash on her way to seven touches, three tackles and three rebounds. Taylor recorded11 hitouts and laid a match-high 13 tackles, whilst Aprille Crooks finished with seven tackles in a strong defensive effort.