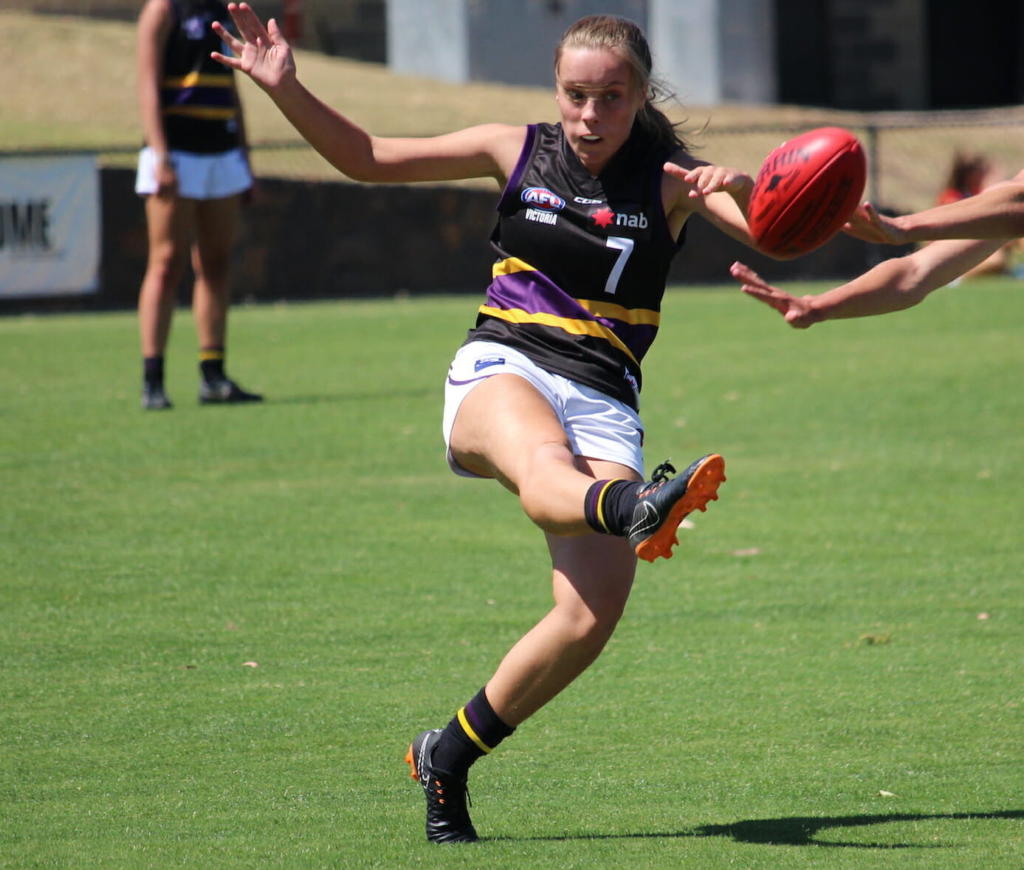 THE Western Jets and Murray Bushrangers travelled to RMIT University in Bundoora to share the points in a nail-biting encounter. Jets’ Laura Elliott kicked a goal late in the last term to draw the match after trailing by seven points at three quarter time.

The first term finished relatively even with a goal apiece. Western’s Elliott started the game well with a massive burst of speed through the middle of the ground and she had impressive composure to kick truly in the first minute of the game. The Jets wasted a few chances early due to not being able to capitalise on their dominance on the scoreboard. Bushrangers’ Grace Hay stood up early taking numerous intercept marks in the first term. Murray was able to get on the board late in the term due to a high contact free to Cassidy Mailer who was causing headaches late in quarter due to her speed. The second term showed the two teams were evenly matched again heading into the main break on 20 points apiece. Charlotte Baskaran (25 disposals) of the Western Jets showed her agility through the middle of the ground as well as superb vision with pinpoint kicking. Bushrangers’ Olivia Cicolini was able to get a goal out the back of a marking contest using her lightning speed, showing good crumbing ability. Caitlin Sargent kicked their second goal of the term through an impressive contested mark and goal from the goal square.

The Bushrangers were able to break away in the third term and create a seven-point advantage at the final change due to a Lily Sharp soccer goal on the goal line. Western Jets’ Isabelle Pritchard shone in the third term, being a dominant inside player who always found a target by hands, tearing up the field with her equal match-high 25 touches and seven tackles. One of the highlights of the quarter was Western’s Ciara Singleton going back with the flight of the ball to take a very courageous mark, showing the desperation of the girls. The last term was dominated by the Western Jets who controlled possession although could only manage one goal and one behind. A major reason why the Jets were unable to kick a winning score in the last term was because of Hay and Kristy Whitehead. Their ability to intercept Jets’ inside 50s only got better as the match went on. The dam wall eventually broke as Sargent levelled the scores with some impressive body work to nudge her opponent off the ball for an easy goal out the back in the dying minutes.

Murray’s best was Hay in defence as she worked tirelessly all day and was superb with her intercept marking and effective kicking, collecting 19 touches, seven marks and eight rebounds. Ruck, Ally Morphett (15 hitouts, nine disposals) and midfielder, Kate Adams (19 disposals, six tackles, one goal) were the standouts through the midfield. Lily Sharp was also impressive providing an option for the Bushrangers up forward, taking pack marks and getting on the scoreboard with a goal. Western Jets forwards Sargent and Elliott were consistently dangerous and were among the best collecting 11 disposals and two goals apiece. Ava Strathairn and Singleton both showed positive signs in the backline while Pritchard and Ham were also good for the Jets in the midfield.

The Western Jets will travel to Mars Stadium to face the GWV Rebels next Saturday at 11:30am, while the Bushrangers’ next match is against the Gippsland Power at Trevor Barker Oval in a fortnight’s time.