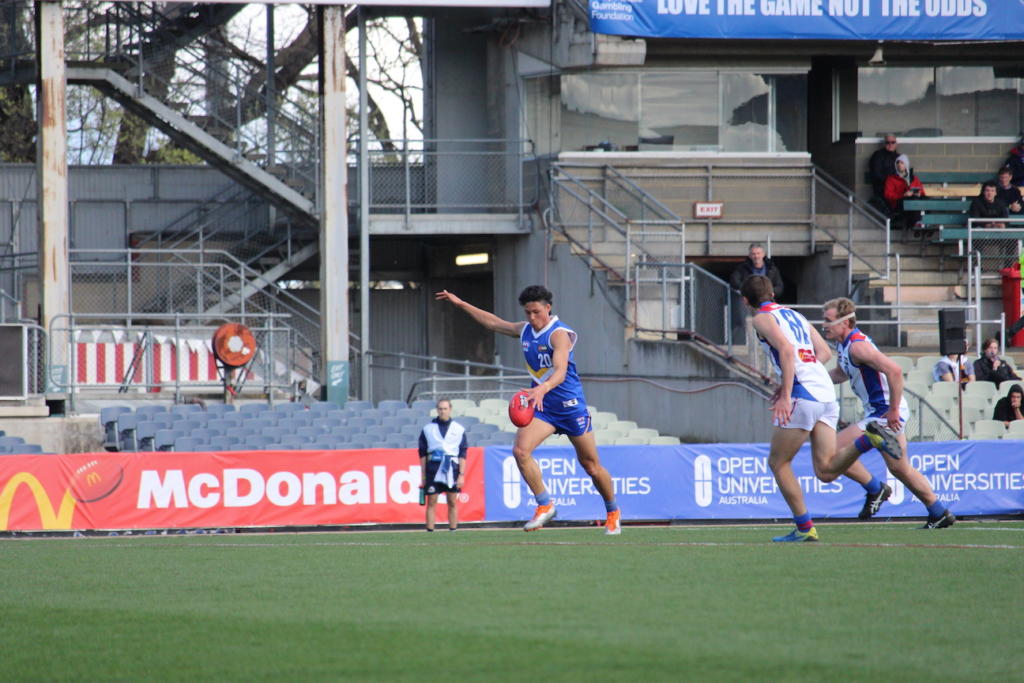 EASTERN Ranges will have a very different look to their NAB League Boys side in 2020 coming off a grand final last year. The Ranges had a top-age heavy group that had come through the program together over the past few years and now a number of fresh faces have joined the club to begin the next year of competition. Eastern Ranges Talent Manager, Sean Toohey said there was an “exciting” element about the unknown.

“We’ve had a different pre-season this year with a lot of newcomers into the program, given we were a very strong top age group last year and probably didn’t have much depth in our bottom age,” he said. “In a way that’s exciting there’s a bit more unknown about that.”

The Ranges have been able to face Gippsland Power in a couple of practice matches over the summer and finalised the list ahead of last Saturday’s NAB League Fitness Testing Day. Toohey said whilst Eastern did not have a draftee in the AFL National or Rookie drafts, the majority of the minor premiers’ side will be running around in the Victorian Football League (VFL) this season. He also said that he believed that those unlucky to miss out could find their way onto AFL lists in the future.

“I mean we’ve got an element of bias here but we thought that definitely a couple of boys were very stiff and talking with clubs I know they were very very close and things just didn’t go their way with some trading of picks and availability of other players, you know recycled players and the rookie draft,” Toohey said. “We were a bit unlucky there but we’ve probably got about 14 or 15 of those boys now on VFL lists spread around we’ve got about eight or so at Box Hill our affiliated VFL club. “So really excited about that, great feedback from clubs on how they’re all going and I genuinely believe that some of them, although they will go about it on a different pathway will end up on AFL lists and get an opportunity at some stage.”

One of those unlucky to miss out has come back as a 19-year-old prospect in Jamieson Rossiter who has battled with unfortunate injuries over the past couple of seasons. Toohey said he hoped Rossiter could continue to show the form he did at the back-end of last season such as a dominant performance over Sandringham Dragons in the qualifying final where he kicked four goals in a low-scoring contest to propel his side into the preliminary finals.

“Jamieson Rossiter is probably the most high-profile one from previous years,” he said. He hasn’t had any luck with his body at all, really any continuity in his footy for the last two and a half years and again after last years grand final he played with a tear in his shoulder that required a reconstruction. He’s come out of the backend of rehabbing that after the operation last year. He’s starting to return to contact this week and excited to see what he can do between us and maybe even some games with Box Hill.”

“He really is a natural forward,” Toohey said of Rossiter’s position for 2020. “I think he plays his best footy forward which we saw in our first final against Sandringham last year. “He was significant in winning our game, we nearly don’t win our game without him. “We think if he gets his conditioning up to scratch he can have an impact in the midfield as well as a bigger bodied midfielder, inside mid. “I think predominantly you will see him as a forward and do what he does well there but it wouldn’t surprise me that if he gets some continuity over the next couple of months that he might in the middle part of the year get into the midfield if that opportunity arises. “

Looking at the top-agers for 2020, the Ranges have another couple in the Vic Metro Academy Hub with some great storylines this year. Connor Downie is a Hawthorn Next Generation Academy (NGA) member and showed through his representation at the MCG for Vic Metro as a bottom-ager last season that he has the talent to make it at the next level. Wil Parker is juggling his football commitments whilst representing Victoria in the cricket with a big decision weighing on him come year’s end. Along with the duo, Toohey also raised another couple of names in speedster Josh Clarke and tall, Jack Diedrich.

“You know he (Parker) is really committed to his studies and Year 12 as well so he’s got a lot on his plate and probably a decision to make at some stage later this year,” Toohey said. “But we are supportive of him and what he is doing, he is coping really well. “Connor is flying at the moment, we had our camp on the weekend and was voted in as our 2020 captain so I don’t think that will be any real surprises. “He’s in really good shape. “Then you’ve got a couple of others, Josh Clarke played every game for us last year, was in the Vic Metro squad as well wingman half-back flanker, got a lot of speed, can hit the scoreboard and takes the game on he’s very exciting. “Then you’ve got Jack Diedrich who’s a developing tall 200cm tall ruckman, in the metro hub. He’s had a good summer so we’re excited to see what Jack can do. “He played a few games last year, as you know those kind of guys sort of develop quite late, he’s quite mobile for his size. “He’s an exciting prospect.”

At the next level, the Ranges have a number of already high-end talents that impressed through the AFL National Under-16 Championships for Vic Metro and then at the back-end of the year for the Ranges in 2019. Toohey said they would be ones to watch going forward this year and next.

“There’s quite a few of them that are quite exciting, the obvious one being Tyler Sonsie who was Vic Metro MVP in Under 16s last year, All-Australian,” he said. “He’s a bottom ager in the Vic Metro Academy, played in our grand final. “Probably done everything he can do as a footballer up to this age. “He’s ticking along okay, he’s had a bit of a back niggle recently so we will ease him into the season probably tracking to Round 1 or 2, no real concern at all its just conditioning and now getting him back up to speed but he’s super exciting.

“Jake Soligo is probably unlucky not to be All-Australian with Tyler, he has probably been a standout in pre-season for us. “He’s a really complete package and for a bottom-ager he’s really pushing to start in midfield and that’s a real credit to him, so we are excited to see what he can do.

“The other one is Tyreece Leiu who is a really big-bodied mid who will probably progress to a Paddy Cripps type size because now he is about 194 and 90 kilos. “He had a back stress fracture pre Christmas and he’s back running now, coming up to speed and now targeting probably around late April from a playing perspective, he’s progressing well. “Those three are probably the standout bottom-agers to this stage and then really it’s up to the rest of the crop to put their hand up which is exciting again.”

Toohey said this year would be really exciting for the Ranges because the squad had a different look to last year, with more top-end prospects but less depth at this stage, but of course that can easily change in a season. Last year there was only 12 bottom-agers in the squad and even across the board, whereas this year has a different feel to it.

“There’s probably more standout draft prospects at the top end but the depth probably isn’t as great as last year,” Toohey said. “So it’s probably a bit of a different group for the next two years. “But generally there’s always a  couple of guys who jump out of the shadows and surprise you a bit and that’s what’s really exciting. “We really knew what we were going to get last year because we had followed them through for so long but there’s a lot of unknowns going into this year and next year probably and our 16s I think are tracking along alright too. “The next few years are quite exciting from that perspective.”

Looking ahead to the season start in less than two weeks, Toohey said the coaching staff and playing group wanted to build on the culture set in place by last year’s group throughout the season.

“I think we really became known as a team that did play for each other and were quite selfless and would play their roles and that’s something we would really love to replicate with this team,” he said. “I know they will get the most enjoyment out of their footy if they do that as the boys did last year but also those that really need to elevate themselves will be able to do that. “There’s something in it for everyone with their NAB League experience with the Eastern Ranges and that’s important for the broader group not just the top-end.”