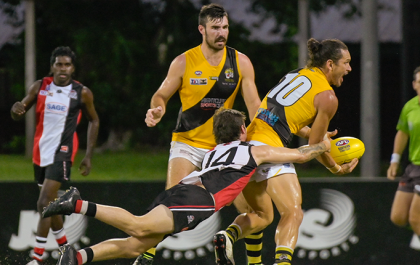 Nightcliff has booked its place in the 2019/20 NTFL Men’s Premier League grand final after dispatching Southern Districts to the tune of 37 points in Saturday night’s preliminary final. The Tigers earned passage to their second-consecutive appearance in the big dance on the back of a second half blitz, scoring eight goals to three to round out an impressive 13.10 (88) to 8.3 (51) victory.

The first half proved a tighter affair but Nightcliff still managed to get on top and stay there, notching three goals to Districts’ two in the opening term before being pegged back to a two-point buffer at the main break. But as it goes, the third quarter is the premiership quarter and the long-time flag favourites proved as much by pouring on seven majors in a scintillating half hour of football. The 33-point margin upon the final break looked ominous for the Crocs, and they could not produce the magic required to enact a turnaround as both sides could only manage a goal each to round out the contest. In a game which was largely competitive, it seemed the Crocs’ string of knockout finals finally caught up with them as only a momentary falter was enough to see the Tigers run away with the game.

Revered for its recruiting and open chequebook, Nightcliff once again had a star ring-in front the winning effort, with ex-Port Adelaide forward John Butcher booting a game-high five goals. Club leading goalkicker Trent Melville was also on target with three majors of his own, while Michael Hagan (two) rounded out the Tigers’ multiple goalkickers in what was a typically sound all-round team performance. For the Crocs, Ed Barlow was again at the heart of their effort as he notched another two finals goals to be named best in a losing side, with Nathan Horbury not far behind on the back of his own two-goal effort. Michael Barlow finished a phenomenal back-end of the season off well, and consistent standout Thomas Holman was also thereabouts.

While somewhat of a rollercoaster season comes to a disappointing end for the Crocs, who looked to be in top form at just the right time, the Tigers have bounced back well and will look to go back-to-back. Standing in their way is St Mary’s, the only team to have beaten Nightcliff this year (twice) – including last fortnight’s semi final – in looking to go from wooden spooners to premiers. Best-and-fairest winner Kaine Riley will be sure to lead the effort alongside newly-crowned co-Nichols Medalist Brodie Filo, with all the finals experience of Cam Ilett also set to be important as Nightcliff hopes to ensure it can get one-back at St Mary’s at the ideal time. The 2019/20 NTFL Grand Final is set to go down on Saturday night at TIO Stadium, stay tuned for our comprehensive preview of the big game.