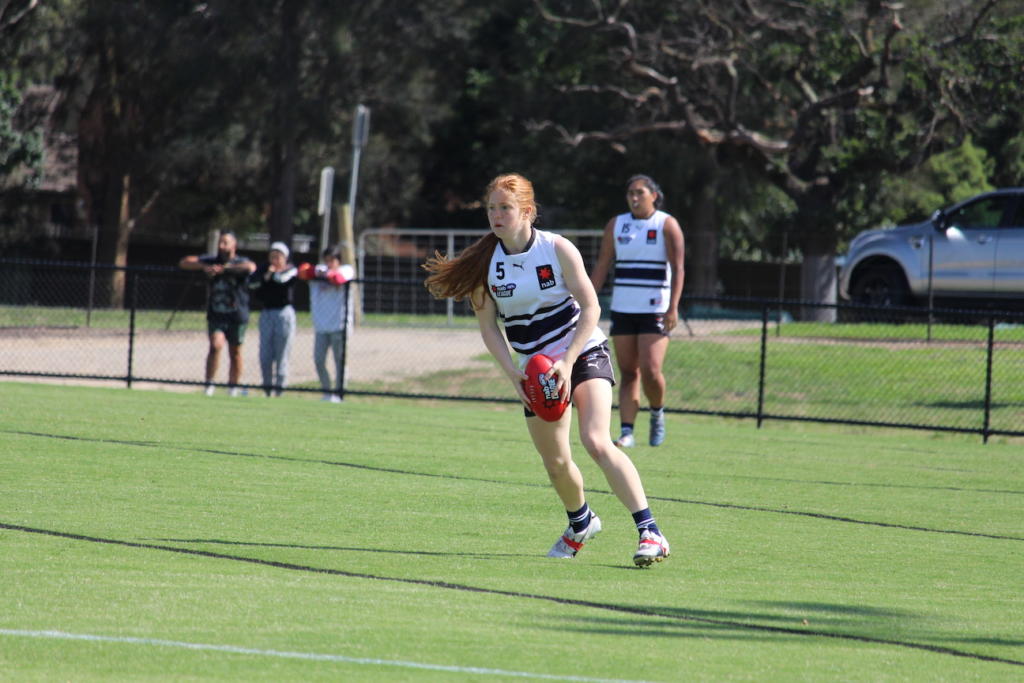 THE Northern Knights flexed their muscles in a see-sawing affair at RMIT University claiming a 25-point win over the Geelong Falcons on Saturday, 5.8 (38) to 1.7 (13) to remain undefeated since their 2018 Grand Final loss to the Falcons.  For the first half it looked as if it was going to be an even matchup with every score being kicked to the left side of the field in the first three quarters. But Northern was too good in the end for Geelong, having more potent options up forward in the form of Alyssa Bannan who was great for a second week in a row, kicking two goals against the Falcons.

Northern Knights kicked a goal in the first and last minute of the opening quarter handing them a 16-point lead at quarter time. Northern Knights’ Grace Wake and Tarrah Delgado were invincible down back, stopping numerous Falcons forward attacks, being a major reason why they kept the Falcons scoreless in the first term. The second term was then owned by the Falcons, they dominated the possession and had five scoring shots to zero, though they were only able to register one goal and three behinds in a wasted opportunity to fly past the Knights heading into the main break. The Falcons’ only goal of the game was scored through a goal line soccer goal by Ingrid Houtsma early in the term.

The third term was when the Knights’ class started rising above, with Abigail Bennett and Ellie McKenzie both starring in the midfield and Bannan being dominant up forward, slotting her second along with Michaela Molenberg getting on the scoreboard. In the fourth term the Northern Knights managed to maintain their lead without conceding a goal for the second consecutive quarter. The sole goal of the quarter came due to some more Bannan brilliance with a great mark while also having enough composure to hit up Brooke Plummer in the pocket for a routine shot on goal. McKenzie amassed plenty of the ball in the final term and was able to easily dispose of opponents at will. Geelong’s Taiya Morrow had her work cut out for her down back with the sheer number of Knights forward entries, although she was well up to the task with numerous intercept marks and release kicks being a shining light late for the Falcons.

Among the Knights’ best down back was Delgado (14 disposals, five rebounds, four marks) who took numerous intercept marks and had the ball on a string in the second term. She has an effective kick for a key position player and is trusted with taking the kick-ins for the Knights. Wake (13 disposals, five tackles, two rebounds) was also immense down back with her tackling pressure causing headaches for the Geelong forwards, whilst up the other end, Geelong’s Annie Lee had a game-high seven rebounds to go with 18 disposals and five marks. Bennett (12 tackles, 10 touches), McKenzie (17 disposals, five marks) and Ashleigh Snow (18 disposals, four inside 50s) were all dominant in the midfield for the Knights. They all accumulated plenty of the ball while also being a class above the Falcons midfield. The main focal point for the Knights up forward was Bannan who was a threat on the ground and in the air, kicking two goals and collecting 14 touches. Geelong’s Morrow was superb down back for the Falcons propelling attacks from defence for Geelong, while Carly Remmos (16 disposals, eight tackles) worked tirelessly all day in the midfield. Laura Gardiner hit the 30-disposal mark for the second week in a row, collecting  31 touches to go with her nine tackles and five inside 50s, while Darcy Moloney (25 disposals, two marks and two inside 50s) put in a tough effort in a match with little return.

Next week the Northern Knights will play at RMIT University once again next Saturday, this time hosting the Dandenong Stingrays at 11am. Geelong’s next game is in a fortnight’s time against the Bendigo Pioneers at Deakin University at 1:30pm.