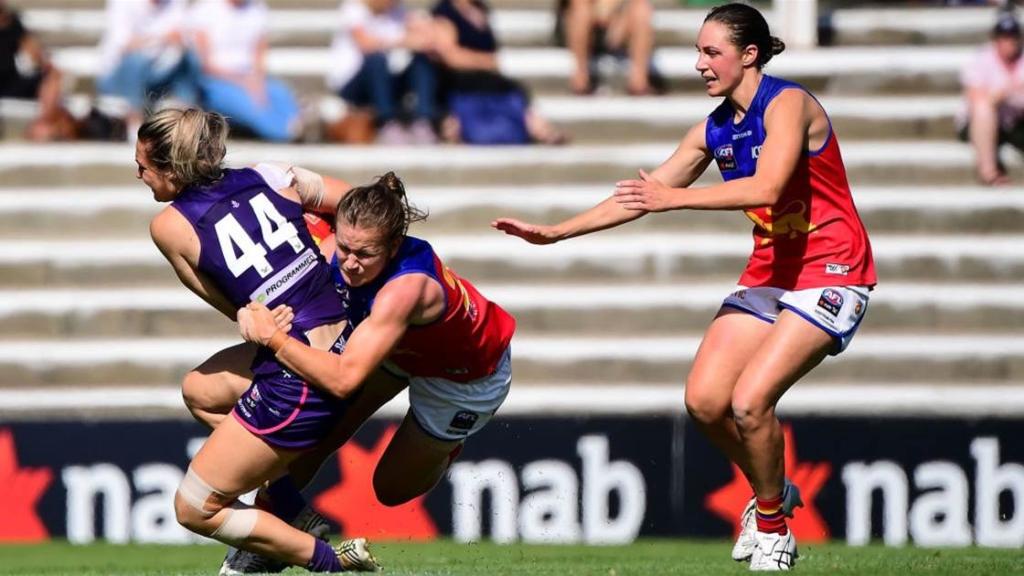 FREMANTLE stands alone as the last remaining undefeated side in AFL Women’s after outgunning a valiant Brisbane outfit at Fremantle Oval. An early onslaught of goals was the difference as the hosts handed the Lions their first loss of the season, while Sabreena Duffy continued her love affair with Fremantle’s home ground to boot a game-high four majors.

Renowned for their ability to slingshot and propensity for taking the game on, the Dockers swarmed forward after an early Brisbane goal to seize momentum and set up the victory with five first term majors. Competition leading goalkicker Jesse Wardlaw was the one to open the scoring after latching on to Cathy Svarc’s bursting ball over the back, before Gemma Houghton provided the same service for Duffy to even the ledger. From there, it was all Fremantle as Ashley Sharp and Ebony Antonio joined in on the fun to help the Dockers pile on goals in quick succession. A Rheanne Lugg free kick conversion was the only form of resistance from Brisbane, as the Lions’ defence had no answer for their opponents’ direct and efficient advances on the break.

Lions coach Craig Starcevich implored his team to crank up the pressure upon the first break, with the wind advantage now in their favour and Fremantle playing at an unsustainably frenetic pace going both ways. An outstanding one-on-one effort from Shannon Campbell to deny Duffy another scoring opportunity seemed to mark a turnaround in Brisbane’s defensive fortunes, and when Jess Wuetschner’s set shot from range carried over the line, the Lions were back in the hunt. But having built up a resistance over time, Brisbane saw much of its inroads dashed through Duffy’s third goal out of nothing, with the home side continuing to outnumber their opponents at the contest. The Dockers’ high octane game would earn them a three-goal buffer heading into the main break, well and truly on top in every aspect of an entertaining half.

The third term was do-or-die for the Lions with plenty of work to be done, and a more direct approach via foot would yield some early success – albeit without troubling the scorers a heap. Errant set shots from Wardlaw and Dakota Davidson – who was beginning to look lively at centre half-forward – made it hard for the Lions in their quest to enforce a turnaround, with the first goal becoming increasingly important. Ever the opportunist, Wuetschner broke the deadlock after ten minutes to reign Fremantle back to within two goals and give Brisbane a real sniff, but another goal late in the term evaded the Lions – not for a lack of trying. Coming home with the breeze, the visitors looked primed to pounce if the war of attrition continued.

But Fremantle, hoping to recreate the magic of their game-breaking first term displayed superior tactics in the final period of play; not allowing Brisbane intercept machine Kate Lutkins to impact the contest, while setting up beautifully behind the ball to take full advantage of the pressure its midfielders were applying at the ground ball contests. Brisbane was unable to get any sort of run and carry going as it looked to take the game on late, with the Dockers locking down on the ball carrier to good effect. The finishing blow was landed by none other than Duffy, who iced the game with over five minutes left on the clock with another major running over the back and into an open goal after some outstanding second efforts from Houghton. Running home strong to a fifth-consecutive victory, the Dockers will continue to be hard to beat in the second half of the year.

Duffy almost pulled off the incredible feat of scoring with each of her touches, finishing with 4.4 from 10 disposals in a best afield performance. Houghton was also instrumental as part of Fremantle’s one-two attacking force, pushing further afield and dominating in the air with five marks in her 13 disposals, while Sharp was electric with two first half goals. Tireless midfielder Kiara Bowers again bossed the engine room with 22 disposals and a monster 15 tackles, aided by the efforts of Hayley Miller (16 disposals) and Ebony Antonio (15, six marks, one goal) in the winning effort.

For the plucky Lions, Emily Bates again showcased her brilliant clearance craft amid 28 disposals and six marks, joined by Ally Anderson (25 disposals, six marks) in notching over 20 touches. Svarc had a couple of moments of magic in her 12-disposal outing, with Lugg (16 disposals) impressing, while Lutkins and Campbell were made to work hard in defence to repel Freo’s swift entries; working in tandem to cut off long balls at half back and mop up inside defensive 50 as the ball spilled over the back. Now at 3-1-1, the Lions have been demoted to second in Conference A, while Fremantle sit pretty at 5-0 atop Conference B ahead of a dangerous chasing pack with plenty to play out in what will be a tight race to finals.