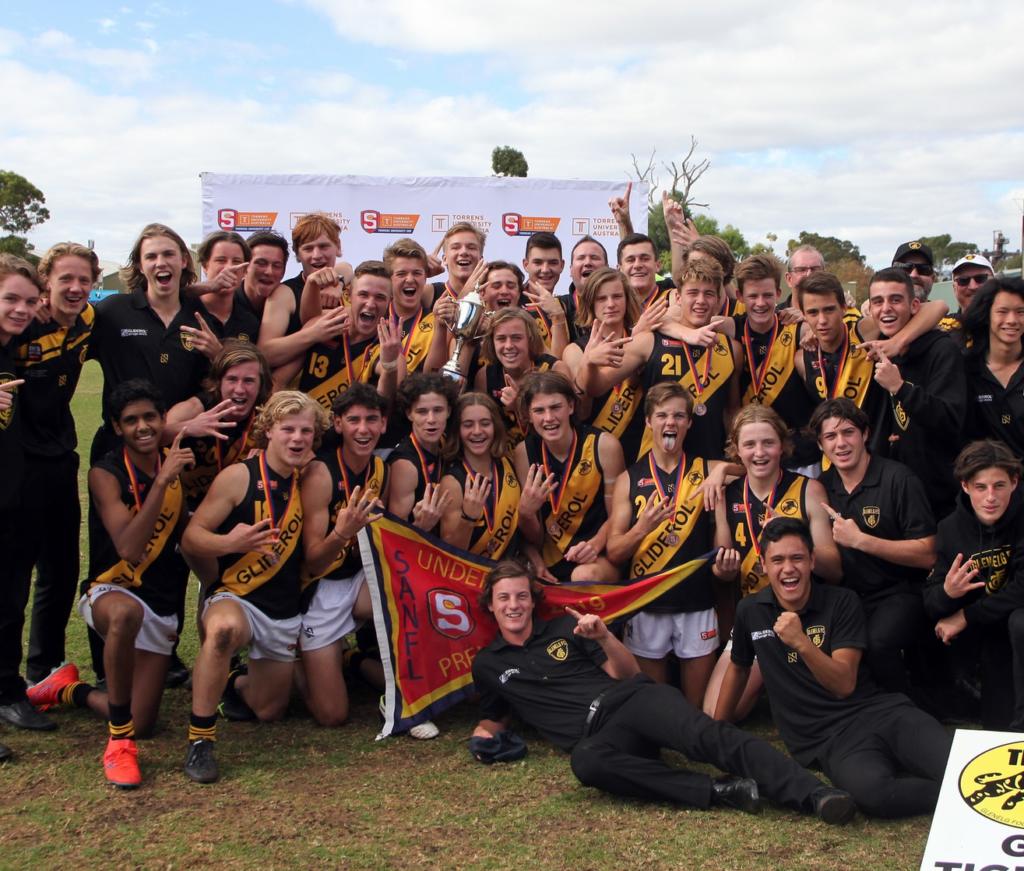 KEEN onlookers will be offered a glimpse into the future of South Australian football when the SANFL Torrens University Under-16 competition commences tonight. Under Friday night lights, last year’s minor premiers and eventual runners up West Adelaide host North Adelaide at Hisense Arena, whilst 2019 semi-finalists South Adelaide head to Coopers Stadium to clash with the reliable Redlegs.

Following a disappointing 2019 campaign resulting in just one victory, Central District will be aiming to start on a positive note when it does battle with reigning premiers, Glenelg in the third game of the night. The opening round concludes on Saturday morning when Woodville-West Torrens face Sturt at Thebarton Oval. As has been the case in previous years, the eight sides will play each other once, jostling for ladder positions with the top four qualifying for a finals berth. Despite Glenelg having won four straight Under-16 titles, expect the likes of West Adelaide, Norwood and South Adelaide to once again stage promising attempts to dethrone the perennial Bayside juggernaut. The season concludes on Saturday, May 2 with South Australia’s best under-16 talents quickly turning their attention towards the mid-year National Championships. For the first time, each Torrens University Under-16 match will be live streamed via the SANFL Digital Pass.

The Bulldogs have participated in the Under-16 finals just once across the past five years but will be out to rectify that pattern, with five of their seven matches being home games staged at Elizabeth’s X Convenience Oval. The 2020 Central District side will be without ultra-talented All-Australian small forward Isaiah Dudley, who is likely to front for the Bulldogs at higher levels.

Whilst many key players in the Tigers victorious 2019 squad will naturally progress to Under-18 level, the club will be looking to continue its utter-domination of the Under-16 competition. The Tigers again boast a strong country contingent, with talent hailing from their prolific south-eastern zone likely to once again play a vital role. Coach Scott Uppington has identified the cohesion between the club’s country and metro-based players as a vital component to his sides sustained success. Having been crowned premiers in the previous four seasons, Glenelg will kick off the new decade as the team to beat once again.

Although the Roosters will play just one match at their Prospect Oval home in 2020 (Round 5 against Norwood), coach Jeff Sochacki will be looking to book a place in the finals for the first time since 2016. Walkerville product Max Blacker featured amongst the best players four times in seven games for the Roosters last season and will be one to watch the progress of, as well as talented teammate Luke Harvey.

Preliminary-finalists last year after being taken care of by the Tigers in the 2018 Grand Final, Norwood will be desperate to take the next step this season. Almost always a competitive outfit, the Redlegs will, however, be without All-Australian Cooper Murley. The onballer was the side’s most promising junior talent throughout the 2019 campaign and will now look to break into the Under-18 side.

South Adelaide’s junior sides have been impressive across the past number of seasons without managing to take the next step. Preliminary-finalists last year, the Panthers succumbed to the eventual premiers by 16 points, ending another solid campaign. South will be without last year’s state Under-16 captain, MVP and All-Australian Jason Horne and prolific goalkicker Matthew Roberts. However the Panthers have a number of talented prospects, headlined by Jaiden Magor, captain of South Australia’s 15 and Under side last season.

The Double Blues have missed the finals in the previous two seasons and are scheduled to play just two games at Peter Motley Oval this season. However the side opens its 2020 campaign against the three sides that also failed to qualify for the finals series 12 months ago and undoubtedly have their sights set on a fast start.

West Adelaide finished as runners-up last year, having concluded the minor season at the pinnacle of the ladder. Strongly-built inside midfielder Tyson Coe, who performed well as a 15-year-old during the 2019 championships, will lead the Bloods in their attempts at gaining revenge. Fellow Sacred Heart scholars Liam Bennetts, Adam Bunworth and Kobe Ryan form the remainder of coach Michael Wakim’s leadership group, alongside Waikerie product Noah Hyde.

The Eagles have experienced recent domination of the SANFL Under-18 competition, having won the previous two premierships after finishing runner up to the Redlegs in 2017. However Woodville-West Torrens have failed to qualify for finals at the Under-16 level since being downed by Glenelg in a five-point affair in the 2017 Grand Final. With their Yorke Peninsula country zone proving fruitful, the Eagles have established themselves as one of South Australian football’s best junior sides and will be expected to mount another strong fight under head coach Darren Hams.