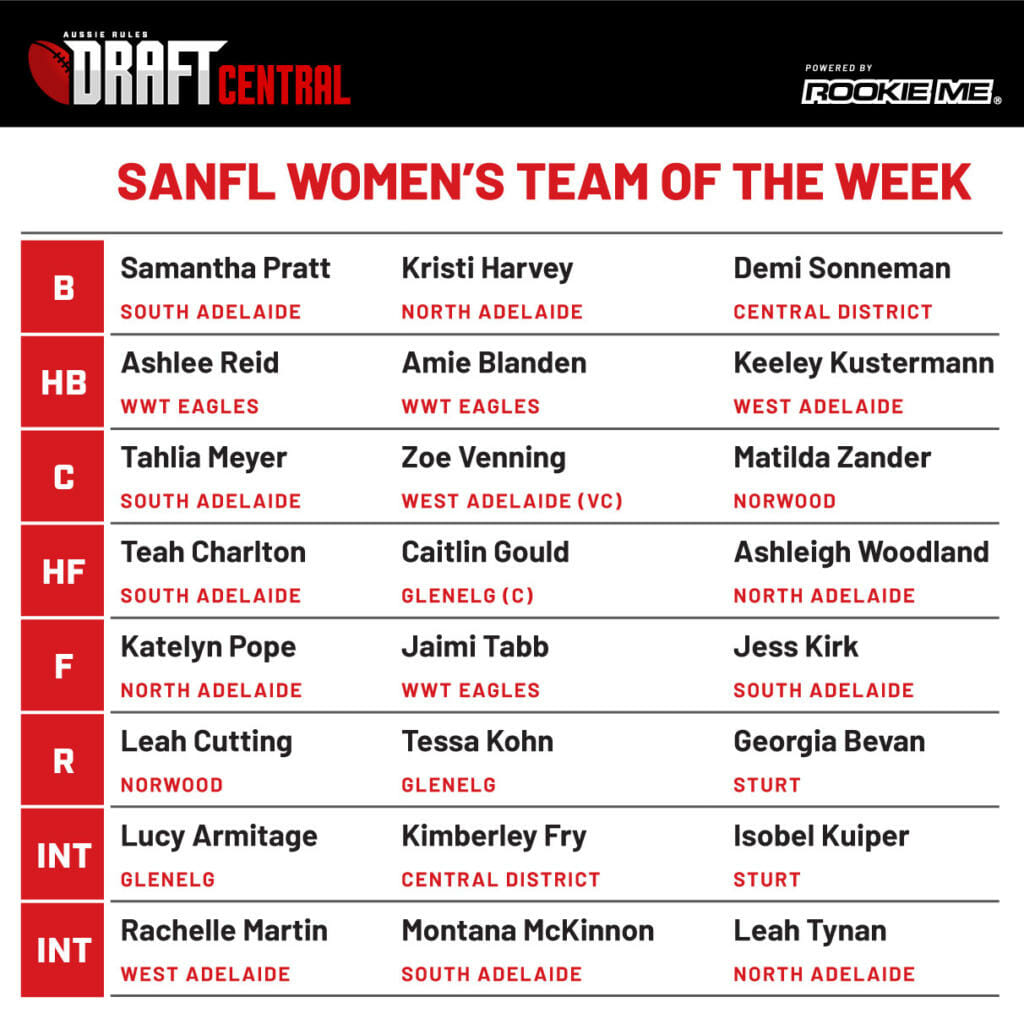 SOUTH Adelaide leads the way for the Draft Central South Australian National Football League (SANFL) Team of the Week nominations for Round 3, with the Panthers recording an impressive five players in this week’s team. Fellow undefeated side North Adelaide recorded four players in the team, with Glenelg, West Adelaide and Woodville-West Torrens – the only losing side to have more than two – also having three nominees. The remaining four sides had two nominees each, in what was an even league contribution this round.

South Adelaide had plenty of players who put up their hand for nomination in the Team of the Week, starting with Samantha Pratt in the back pocket. She had 18 disposals, two marks, eight tackles, two clearances and six rebounds in the Panthers’ win, while up the other end, Jess Kirk kicked a round-high four goals to go with seven disposals and three contested marks. Through the midfield, Tahlia Meyer was named on a wing after 22 disposals, two marks, three tackles, four inside 50s, two rebounds and a goal, just up from Teah Charlton (26 disposals, six tackles, two clearances, five inside 50s and two rebounds). Rounding out the Panthers’ five is Montana McKinnon who was named on the bench after another strong performance of 14 disposals, seven marks – four contested – three hitouts, two inside 50s and four rebounds.

North Adelaide also remain undefeated in the competition and had four players made the side this week with Kristi Harvey slotting into full-back for the third consecutive week, racking up 15 disposals, five marks and three rebounds in the Roosters’ victory. Up the other end of the ground, last week’s captain, Ashleigh Woodland booted another three goals from five scoring shots to go with 22 touches, seven marks, two tackles, three clearances and two inside 50s. In the forward pocket is Katelyn Pope who had a team-high eight inside 50s as well as 15 disposals, four tackles and a goal, while on the bench due to a stacked starting midfield is Leah Tynan (18 disposals, two marks, six tackles, three clearances and four inside 50s).

Glenelg had its first win of the season on the weekend and were rewarded with three players making the side. Tess Kohn made back-to-back teams, this time in the starting line-up after 13 disposals, five tackles, five clearances and three inside 50s. Captaining the side this week is match-winner and Adelaide AFL Women’s player, Caitlin Gould who was a late inclusion and made the most of it with four goals from eight scoring shots, 18 hitouts, 17 disposals, six marks (two contested), four clearances, two inside 50s and four tackles in the clear dominant performance in Round 3. The other Tiger in the team is Lucy Armitage who made it in after 13 disposals, seven tackles, two clearances and four inside 50s. Their opposition on the day was Central District, with the Bulldogs earning two players in the side – both defenders – with Demi Sonneman named in the back pocket following a 19-disposal, two-mark and six-rebound game, while fellow defender, Kimberley Fry was named on the interchange for her 11 disposals, two marks and four rebounds.

Woodville-West Torrens had three players named in the side as well despite the loss, with a couple of defenders making it in on the half-back line. Amie Blanden and Ashlee Reid both make their debuts in this team following outstanding performances. Blanden had 13 disposals, two marks, three tackles, 10 hitouts, two clearances and two rebounds getting around the ground, while Ashlee Reid finished with 11 disposals, two marks, nine tackles, two inside 50s and five rebounds. Jaimi Tabb was the clear dominant forward in the game, booting three goals from four chances, while having 10 disposals and laying five tackles. Their opponents Sturt only had the two players make it in despite winning in an even team performance. The Double Blues had Georgia Bevan in for the third straight week after 20 disposals, three marks, six tackles, four clearances and three inside 50s, while Isobel Kuiper made the bench following her 18 disposals, five marks, six tackles, four clearances and two inside 50s.

West Adelaide’s three nominees in this week’s team are represented across three areas with Keeley Kustermann returning to the side once again following 12 disposals and six rebounds in defence. A couple of midfielders also make the side with Zoe Venning named vice-captain of this hypothetical squad after a huge game of 26 disposals, six marks (two contested), three clearances, two inside 50s and three rebounds, while Rachelle Martin made the interchange after 16 disposals, four tackles and five clearances. Rounding out the 24-player squad is Norwood who also had two players in the side, Matilda Zander and Leah Cutting. Both players have been in the team this season already, and on the weekend, Zander racked up 18 disposals, eight marks (four contested), three tackles and four inside 50s, while Cutting was named in the ruck once again after 19 hitouts and seven clearances to go with her 11 disposals and six tackles.

There were plenty of players who were on the fringe of forcing their way into the side, and the trio on the cuff of making it in and named as the three emergencies in the team are Glenelg’s Madisyn Freeman, South Adelaide’s Czenya Cavouras and Woodville-West Torrens’ Sophie Zuill. Extending out to the shortlist were defenders, North Adelaide’s Lauren Gauci and South Adelaide’s Emily Brockhurst, Eagles’ forward duo, Stephanie Walker and Kiana Lee, West Adelaide’s Emma Smith and Sturt’s Alex Ballard. Double Blues’ Zoe Prowse and Glenelg’s Soriah Moon were considered for the ruck position as well, while Sturt duo, Jaimee Wittervan and Maya Rigter, Panthers’ Indy Tahau, Norwood’s Jade Halfpenny and Isabel Martin, Central’s Shelby Smith and West Adelaide’s Abbie Ballard were all in consideration for the heavily talented midfield group.

DRAFT CENTRAL SANFL WOMENS TEAM OF THE WEEK – ROUND 3: