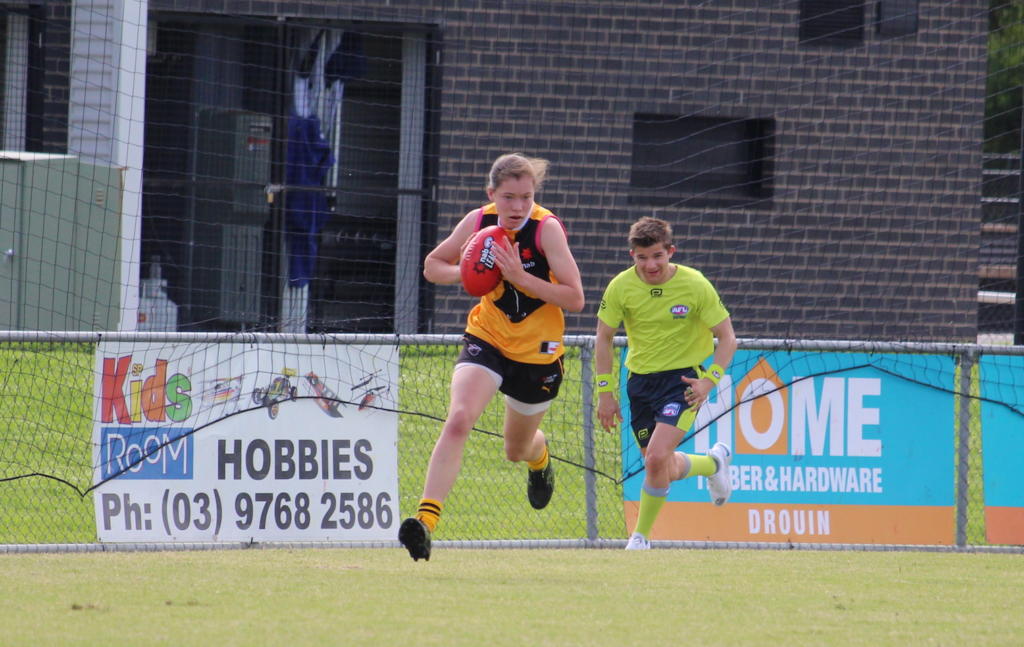 IT was a near-perfect start to the season for the Dandenong Stingrays in the NAB League Girls competition, defeating Eastern Ranges by 50 points at Holm Park Reserve in Beaconsfield on Sunday. Despite an impressive performance where coach Dave Carden said the players executed the quick ball movement and clean hands they were looking for, he is still hoping to build on areas to improve for the future ahead of a tough couple of weeks against last year’s grand finalists, back-to-back.

“It’s interesting, because you’re not really sure what to expect,” Carden said. “We’re such a new squad. “We had 11 debutants play their first game for the Stingrays today and we’re pretty much a brand new coaching staff. “So we’ve worked on a lot of things over the summer and it’s really been about the fundamentals. “Making sure we’re getting our kicking right under pressure, (a) massive focus on clean hands, but also them having the courage to take the game on. “We talked about it as players, we want them to bring their strength to the game, rather than a whole heap of structural stuff and be you. “You know what? I think they did a really, really good job right across the ground doing that.”

“‘T’ is a coach’s dream,” Carden said. “She turns up to every training session eager to learn, whatever it be. “Whether it’s a hard strength and conditioning set or learning a new part of the game. “She’s always looking to improve and that sort of work ethic is why she gets results on the ground. “When you look at some of the kids down there in the backline, Mackenzie Eardley who was great above her head. “She might be 16, but she’s done an amazing job. “That support for ‘T’ who’s a fantastic player is what we’ve been trying to work on.”

Eardley is one of a number of talls in the Stingrays’ team who are well complimented by some determined smalls and hard runners across the field.

“It’s probably a little bit early, we’ve actually been looking at that. we’ve got some good size in key positions, girls like Charley Ryan, I mentioned Mac (Eardley), we’ve got Serene (Vudiniabola) who was in the goalsquare today – nice and strong above their head. But that’s then complimented by people like Amber Clarke, Emily Shepherd, who are just so ferocious and just great users around the ball. Our skipper Abbey Jordan, just didn’t stop running I think her GPS numbers will be off the chart, so what we look for is a really good balance across the whole ground and I think we got that today, certainly.”

Those names were some of the Stingrays’ top performers on the day, with Carden praising their ability to win the ball both in the air and at ground level, with great competitiveness.

“I think Serene up forward put the ball up high and if she doesn’t mark it, she is really good at ground level. I think Emily Shepherd and Amber Clarke both gave their all and Brooke Smith down back as well. “Another first gamer, again having the courage to take it on from the half-back, that’s what we’re encouraging. “If that’s her game, we want her to play that way. It’s going to be a very difficult job to go and see who we give votes to I can say that.”

Despite winning the match by 50 points, Carden said the scoreboard was not what impressed him most. He was pleased the players were able to execute the game plan set out and build on the areas practiced in the pre-season.

“I must admit, we didn’t even look at the scoreboard during the day,” Carden said. “We’ve got a philosophy down at the Stingrays about the fundamentals. “Are we executing what we practice right? I just think just being able to get the results on the scoreboard, that comes from being able to move the footy and clean hands. “If you noticed today’s game how it was a lot more open, that’s where female footy is going, so we’re looking more at that. “The scoreboard was a great outcome, but I think the actual result we got on the scoreboard to kick nine goals, when it’s only 60 minutes of playing time is a pretty good effort.”

The quick ball movement allowed the Stingrays to be ultra-effective inside 50 with 13 scoring shots from just 22 inside 50s, two more entries than their opponents who had three scoring shots. It meant 59 per cent of the time the Stingrays entered the forward 50, they scored, and 41 per cent of the time, it was a goal. Their tall combination of Vudiniabola and Georgia Grimmer shared in a couple of goals each, while the smalls of Ashleigh Richards and Jessica Matin went to work at ground level.

Despite having such an impressive win to shoot the Stingrays up to the top of the table after one round, Carden said there was still plenty to learn from the game and tweak ahead of their next fixture against 2019 NAB League Girls grand finalists, Calder Cannons next Saturday.

“I think in some of the stoppages, because we’ve worked so much on our fundamentals, we’ve done almost nothing on structures, but just teaching them a little bit of positioning to play around the stoppages,” he said. “We’ll work on that. “I think also committing to some of the change of direction stuff we’ve been working on. When you spread, spread wide and commit to that. “But as they know, every single week, the girls said it will be clean hands, clean hands, clean hands in every situation of the game.”