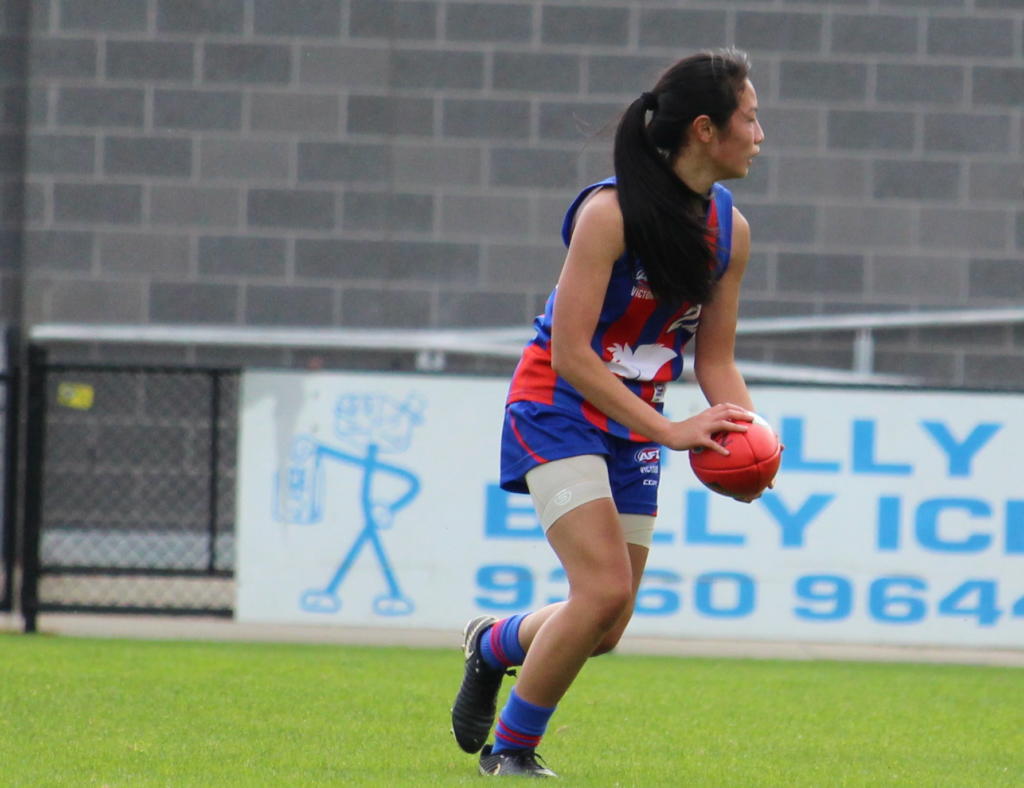 THE opening round of the 2020 NAB League Girls saw Oakleigh Chargers produce a stellar win to start the season on the ultimate high, defeating Murray Bushrangers by 50 points, 11.9 (75) to 4.1 (25). While it was a fairly even contest between the arcs, the Bushrangers were unable to stop the Chargers inside 50 with a plethora of goalkickers peppering the posts throughout. Oakleigh had a much bigger presence on field, seeming to have more numbers around the footy and using the ball well inside 50 to find good space and put goals on the board.

It was a fast and convincing start from the Chargers who were quick to get on the board, with Alice O’Loughlin booting her first of the day. While the Bushies put in a solid effort defensively, with Mindy Quade leading the way with eight rebounds and nine disposals, they could not stop the Chargers’ numbers forward and were outmarked by Oakleigh’s clean hands with the side combining for 27. The Chargers impressed in their forward half when they turned to defence, shutting down the Bushrangers as they attempted to transition through the midfield and rendering the side unable to cleanly enter their forward 50. Oakleigh’s O’Loughlin and Mimi Hill lead the charge, collecting seven and six disposals respectively, while Murray’s Mikayla Jones collected a solid pack mark toward the end of the quarter to prove the Bushies had plenty left in the tank.

Another goal from O’Loughlin started the second quarter on a high, with a step to the right and kick around the body straight through the posts. The Chargers continued to apply pressure on every ball from the Bushrangers, forcing the Bushies to bomb kicks inside 50 in hope of finding forward options. While they shanked a few opportunities in front of the big sticks, Sophia McCarthy aimed true, booting Murray’s first of the match. The Chargers seemed to be second guessing themselves in the second quarter, with the Bushrangers disrupting the Chargers’ transition down field a lot better and and pressuring better up the ground – though Oakleigh still booted three goals for the quarter in a solid display of forward pressure, leading all stats at half-time with Hill on 17 touches by the main change.

A massive third quarter from the Chargers  saw the side well and truly run away with the match. While the Bushrangers entered the second half with new vigour, the third quarter was all for the Chargers, booting five goals nil and well and truly controlling the match. With the defensive pressure still on and Quade snatching up an impressive smother, the Chargers had to work hard for the footy inside 50. Amelia James (19 disposals, six hitouts, two goals) booted her first of two within the first five minutes of the quarter, with Chargers forming a solid connection and chain of events downfield after a missed opportunity from the Bushrangers. James was on the end of the chain, evading defenders for an impressive goal. Stella Reid also put in a solid effort in front of goal, adding two more goals to the tally. Both sides brought the physicality in the third, with the Bushrangers leading the tackle count at three quarter time.

Oakleigh was poised for a dominant finish against the Bushrangers coming into the final quarter, but the Bushies were not to be disregarded, proving they still had plenty left in the tank and bringing a new intensity to the fray, shutting down their back 50 in the final quarter to reduce the margin and deny the Chargers any more goals. The Bushrangers had a lucky start to the quarter with a set shot inside 50 converted to a 50m penalty and kick in the goalsquare for Olivia Cicolini. The goals well and truly set the Bushies in motion, and while the Chargers continued to show the same great forward pressure they just kept missing the mark but still did what they could to mark it hard for the Bushrangers to stay clean. A solid goal from Olivia Barber kept the Bushies pushing forward though she was helped off the field by trainers moments later, having suffered concussion. Barber did not re-enter the field for the rest of the match, and a goal from Chloe Locke to finish out the game saw Murray come away with some semblance of victory, well and truly winning the final quarter despite going scoreless in the first and third.

Overall, Oakleigh was far too good on the day with plenty of standout performers getting the job done. Hill (29 disposals, five inside 50s, three tackles and two marks) and O’Loughlin (three goals, 18 disposals, three marks) were the clear bests, while Eliza James collected 18 touches, five tackles, seven inside 50s and booted a goal in a solid outing. Murray’s Zali Spencer (nine disposals, seven tackles, two rebounds) and Jones (12 disposals, five inside 50s) also put up solid efforts while Quade impressed down back. Murray were well and truly blown away in the possession count but otherwise finished well in the tackles and hitout stats, only one down in both by the end of the game.