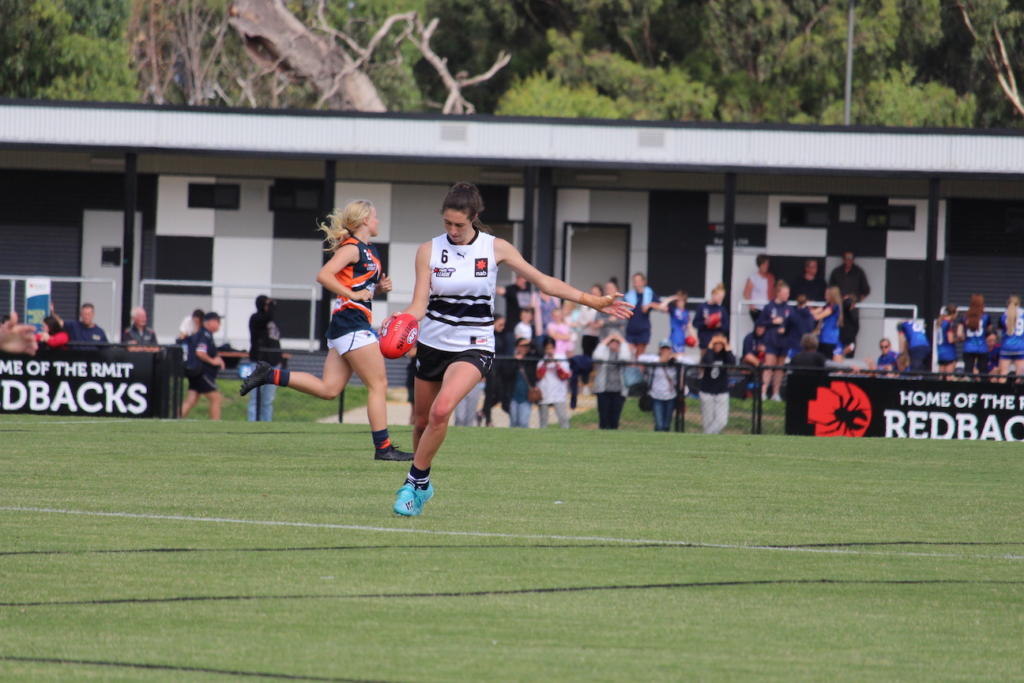 IT was a thrilling opening game of NAB League Girls with reigning premiers Northern Knights snatching a one-goal victory over grand finalists Calder Cannons, 8.5 (53) to 7.5 (47). It was an even start to the game with both sides struggling to break away from each other credit to the high intensity battle and skill on show. The Cannons held the lead heading into the second quarter but the Knights ability to pepper the goals in the second term gave them the advantage at half-time, a margin which they continued to hold for the remainder of the match.

It was arguably a best on ground performance from Knights forward Alyssa Bannan who was in ripping form with the talented youngster clunking just about everything that came her way and leading up to the footy time and time again. Her accuracy in front of goal was impressive nailing a whopping five goals thanks to her goal sense while also showing her clean hands and ability below her knees to move the ball forward. Through the midfield Ellie McKenzie was on song with her gut-running and explosiveness on full display, bursting through the packs and effectively disposing of the footy. She finished with 12 touches, four inside 50s and three tackles, while teammate Jess Fitzgerald impressed by foot delivering passes lace out with 10 kicks and an overall 15 possessions. Coming out of defence Fitzgerald was red hot with three rebounds while Ashleigh Snow also displayed her defensive ability laying eight tackles. Maeve Chaplin led the troops in disposals for Northern racking up 16 disposals and working hard across the ground to hit up a target.

Although they fell agonisingly short the Cannons had a couple of star players wow in front of a strong crowd at RMIT Bundoora with 16-year-old Charlotte Clayton leaving her mark inside 50 with three majors. Clayton did not win a lot of the footy but when she got ball in hand she made the most of her opportunities while teammate Jessica Zakkour was handy in front of the big sticks with two goals and 18 disposals highlighting her influence across the ground. NTFLW Palmerston star Freda Puruntatameri generated plenty of excitement up forward with her leaping ability and strong hands not often beaten in a one on one and nailing a goal. Youngster Georgie Prespakis lit up the field once again with another strong performance thanks to her 19 disposals, three rebound 50s and three inside 50s displaying her ability to win the footy at either end of the ground. Captain Laura Cocomello and Emelia Yassir combined well with the two collecting a combined 33 touches and sending plenty of excitement through the Calder camp.

After winning the 2019 NAB League Girls grand final rematch, the Knights face Geelong Falcons at RMIT Bundoora next week in a rematch of the 2018 grand final. Meanwhile, Calder host Round 1 winners, Dandenong Stingrays at Craigieburn to try and bounce back to get on the board with a win.