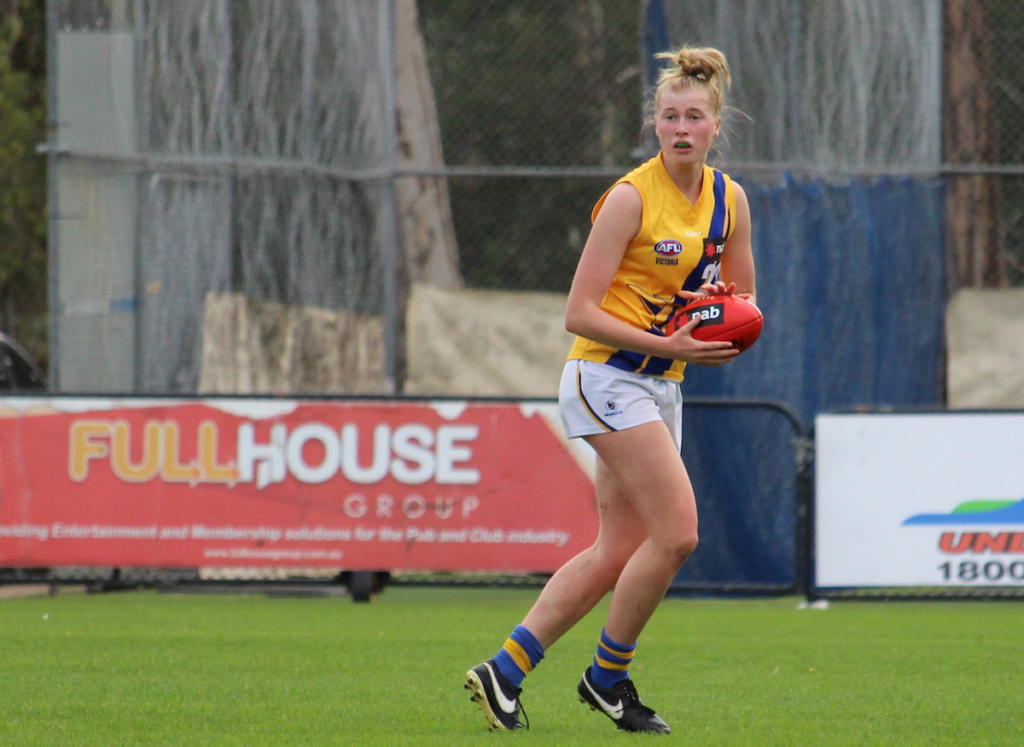 WESTERN Jets have opened the season with a win for the first time in their history, downing Bendigo Pioneers by 22 points at Queen Elizabeth Oval. The win on the road was set up by a terrific second half, where the Jets’ defensive structures held up and kept the Pioneers scoreless, while adding 2.4 themselves in a half that could have been even more fruitful with a few gettable shots missing. Despite having three players directly drafted from their top-end list last season, the Jets showed they have a lot of young talent coming through to support their sole AFL Women’s National Academy member, Isabelle Pritchard with the likes of 15-year-olds Montana Ham and Charlotte Baskaran, and new top-age inclusion, Amelia Velardo.

The Jets scored their first goal less than a minute into the match with Olivia Forsythe winning a free kick and converting truly, only for Bendigo’s Billie Reidy to respond with an answering major a few minutes later. The home side soon hit the front with new inclusion, Natasha Kelly standing her ground and using good body work to turn around and kick a goal on the run from the square. Just as it looked like Bendigo had the momentum midway through the first term, Caitlin Sargent popped up with two goals in as many minutes, one from a great snap and another from a free kick to hand the Jets a six-point lead at the first break. Kelly had a chance for her second major early in the second quarter fending off an opponent, but instead handballed to a free Octavia Di Donato in the goalsquare who turned around and made no mistake. Another free kick to the Jets – this time through a 50m penalty – gifted Forsyth her second from point blank range. Kelly again had another chance to score with a great mark inside 50, but it fell just short and was rushed across the line. Heading into half-time, the Jets were again a goal clear of their opponents.

Little did onlookers know, the rushed behind in the second term would end up being the Pioneers’ last score of the game as Western added two more goals to its total, first through a Jemima Woods goal nine minutes into the third term. They were not without a number of chances though as Ham went for a run down the wing with multiple bounces and almost led to a goal had it not been for a goal-saving tackle from the Pioneers. Trinity Skenderis also had a couple of chances in the third term, with a set shot going into the player on the mark, but she got the goal she was looking for in the final term, earning another 50m penalty and kicking from the top of the goalsquare. The margin arguably could have been greater too, with Sargent having a chance for her third from the top of the square five minutes into the last, but could not get it done, spraying it to the side. Throughout the game it was hard not to notice Bendigo Pioneers’ co-captain Brooke Hards who did all she could to will her side across the line. Along with Jemma Finning coming out of defence, and co-captain Annabel Strahan also finding plenty of the ball, they worked hard through the four quarters but would ultimately come up short against a really impressive Western outfit.

Ham finished the day with a game-high 21 disposals, six marks, six inside 50s and three rebounds for her troubles, while Velardo had some eye-opening moments with her movement and ability to ruck and then rove her own plays. She had 16 disposals, nine hitouts and three inside 50s, constantly putting pressure on the Bendigo defence. Baskaran was a welcome addition coming from the back half and pushing up to the wing, always getting to the right positions and finishing the match with 19 touches, seven tackles, three inside 50s and four rebounds. Pritchard showed once again why she is rated so highly, finding the ball in all three areas of the ground, starting through the midfield, drifting forward to have a shot on goal, then holding up the defence in the last term. For the Pioneers, Hards was the clear standout with 18 disposals, three marks, six tackles, three inside 50s and two rebounds, with her competitiveness showing in the final term when she gave away a free kick but she could not have done much more. Finning (13 disposals, two marks, three tackles and four rebounds), Strahan (15 disposals) and Maeve Tupper (11 disposals, three marks and four tackles) found plenty of the ball, while Kelly impressed far more than her four touches might suggest given she set up a couple of scoring opportunities as well as kicking a goal herself.

Next week the Jets are at RMIT Bundoora, where they take on Murray Bushrangers, while the Pioneers head up to Craigieburn for a clash with fellow Round 1 losers, Sandringham Dragons to try and get on the board in season 2020.