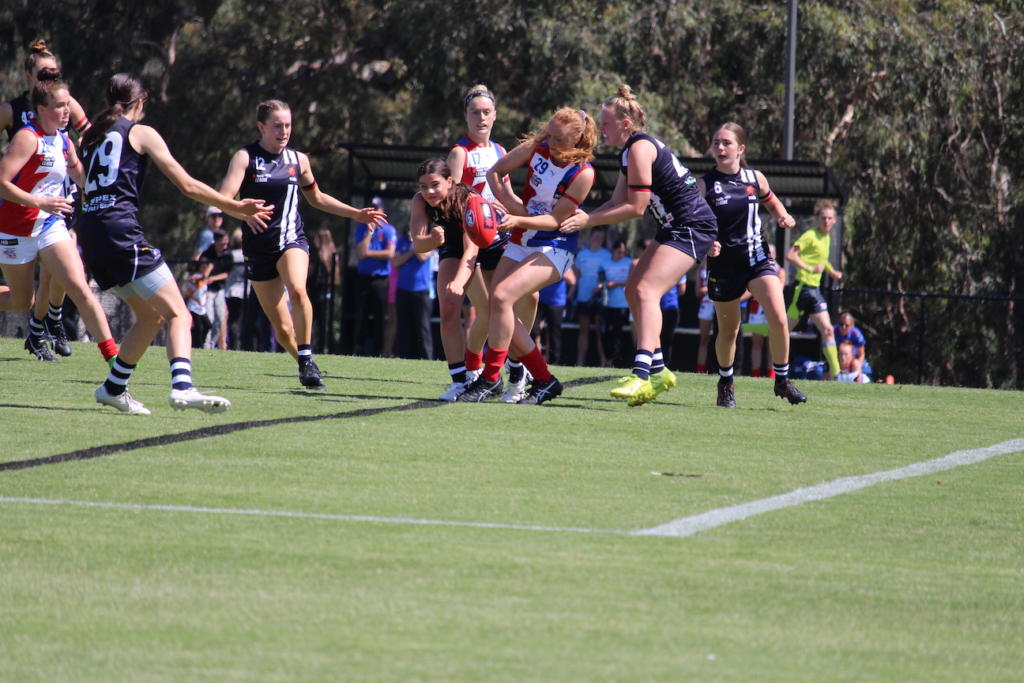 IN a relatively one-sided affair, Geelong Falcons defeated Gippsland Power by 33 points at RMIT Bundoora in the first round of the NAB League Girls competition. Though inaccuracy plagued the Falcons at times who struggled to make the most of their opportunities in front of goal with 10 behinds, credit must be given to the Power’s defence, for the most part holding up across three quarters. Seven scoring shots to none in the final term extended the winning margin out to 33, but it was a strong hitout for both teams this early in the season.

It did not take long for Geelong to get on the board, and although it was a point at the hands of Renee Tierney it helped to set in motion what was to come – a barrage of scoring opportunities. Poppy Schaap kicked off her 2020 campaign in style with the opening goal for the Falcons and while the Falcons seemed to control the flow of play, over-ager Shanara Notman was a calming influence down back. Notman was everywhere in the first 15 minutes of the game popping up here there and everywhere to stop any forward forays and using her football nous to try and propel the ball back down the field. Despite her best efforts, Notman could not contain the Falcons forwards, with Zoe Garth bobbing up for her first major thanks to her ability to get out the back and bang one through the middle helping to extend Geelong’s lead.

The Power failed to register a score in the opening half, but strong efforts from the likes of Megan Fitzsimon and Matilda Van Berkel did not fall by the wayside. Fitzsimon was a real workhorse across the ground winning plenty of the footy and using her tackling ability to disrupt the flow of Geelong. Although the Falcons had their chances in front of goal they were unable to capitalise and punish their opposition with the likes of Elizabeth Dowling showing her skill inside 50 bringing down a big mark but just missing. Dowling was not afraid to put her body on the line going in hard to rip the ball out of congestion and plough it forward. With points aplenty, Carly Remmos made her set shot count, converting an important goal to add to the Falcons’ tally. Laura Gardiner continued to find her groove with her high intensity out of the middle, hunt for the footy and clean hands all on display. She was never far from the pack, constantly lurking around the footy and using it effectively while her read out of the ruck was second to none getting on the move and banging it forward credit to her skill and general smarts.

With pride on the line, the Power came out with a different intensity and hunger for the footy shutting down any easy ball movement by the Falcons and instead looking to change the course of the game. Only three goals down, Gippsland hit the scoreboard thanks to a big goal from Grace McRae, with players running from everywhere to join in on the celebration. The Power seemed to dominate the play in the third holding the ball inside their attacking 50 and searching for opportunities to create more chances. Leyla Berry was running hot in the third working hard at the contest and using her hands to flick the ball out to teammates. Darcy Moloney continued her merry way for the Falcons throwing her weight around and using her quick hands in tight to dish off to teammates in space. Although Geelong failed to hit the scoreboard throughout the third, the work they did defensively to only limit their opponent to a goal was impressive with bottom ager Ashleigh Van Loon leading from the front with her physicality and desperation with 10 tackles for the match. Mia Van Dyke also had a strong quarter for the Falcons highlighting her clean hands with a couple of marks.

Thanks to a relatively slow third term the Falcons turned it on in the fourth to nail two goals and ultimately seal the deal against a trying Gippsland side. Ingrid Houtsma was the first to add six points to the Falcons total in the final term and while she did not find a heap of the footy she struck it nicely. Gardiner capped off a stellar performance in the last term with a big goal to end the stream of points and well and truly romp the win home for the Falcons. She starred from the opening minute of the game winning a heap of the footy and showcasing her versatility in terms of disposals with an even split of 19 kicks and 19 handballs to finish with a whopping 38 touches. It was a stats filling outing for Gardiner who also showcased her physicality laying 14 tackles and recording five inside 50s. Schaap finished with 1.2 in front of goal along with 24 touches while Moloney recorded 28 disposals. Top performers from Gippsland included Fitzsimon with 16 touches, six tackles and four inside 50s with Berry and McRae collecting 14 possessions apiece.