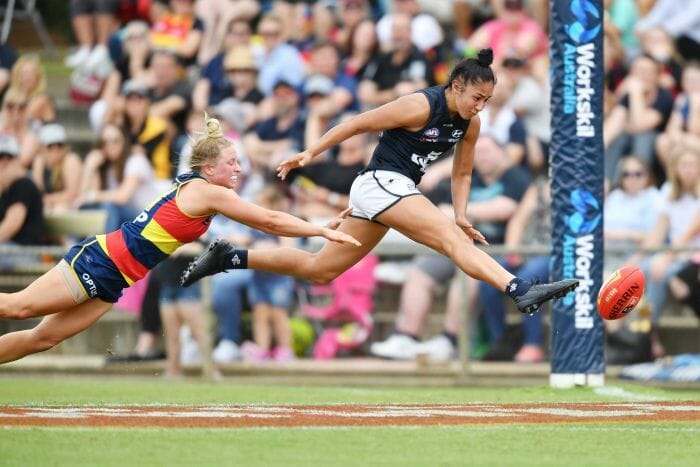 CARLTON has spoiled Erin Phillips’ return to footy on Sunday, defeating the Crows by eight points at Richmond Oval in a convincing display. The Blues dominated the disposal count (267-179), the contested possessions (95-73) and the inside 50s (32-27). Although Carlton led the entire last term, the first three quarters were much closer.

Stevie-Lee Thompson was lively for the Crows early, applying some great pressure and setting up Rhiannon Metcalfe for the first goal of the match. Phillips didn’t take long to make her presence felt, making a strong impact around the stoppages and taking a nice one-handed mark on a lead. Carlton had 32 more first quarter disposals and despite doing most of the attacking, they squandered multiple opportunities in front of goal. Dayna Cox and Marijana Rajcic had outstanding first quarters for Adelaide in defence, deterring several Carlton attacks with strong spoils and crunching tackles.

Eloise Jones got Adelaide off to a great start in the second with a classy drop punt from the pocket. Ailish Considine followed this with a nice snap goal and the Crows looked on their way to a comfortable lead. However, this all changed when Madison Prespakis and Darcy Vescio combined to drag Carlton back into the game. Nicola Stevens kicked her first to get the Blues on the board, while Chloe Dalton and Katie Loynes began to make their mark around the stoppages. Vescio was very dangerous in the forward 50 for the Blues and set up Prespakis for their second.

Carlton seemed to over possess the ball early in the third, and Anne Hatchard capitalised by catching her opponent holding the ball and kicking truly. Tayla Harris responded with a 40-metre bomb, then kicked her second after a nice mark just minutes later to give Carlton the lead. The Blues continued to set up strongly behind the ball, building a wall that Adelaide kept blindly bombing into. Facing a two-point deficit at three quarter time, an ankle injury to part-time ruckman Jess Foley did not help matters for the Crows.

The last quarter was played at a high intensity and was filled with stoppages. There was a long scoreboard stalemate until Vescio showed her class once again, beating her opponent one-on-one in the goalsquare to put her side nine points ahead. Carlton’s defence held up brilliantly under-fire in the last term, repelling Adelaide’s attacks and chipping the ball around to take time off the clock. Meanwhile, Adelaide’s forward line was uncharacteristically dysfunctional, with usual contributors Danielle Ponter and Courtney Gum struggling to make an impact. Carlton comfortably closed out the eight-point victory.

Vescio and Prespakis were far and away the best two players on the ground. Vescio was everywhere with 17 disposals, five marks and a vital goal while Prespakis had the ball on a string, collecting 20 disposals, four marks and a goal. For the Crows, Cox played her best game of the season in defence, while Hatchard used her incredible work rate to rack up 27 disposals, seven marks and four tackles.

Adelaide will look to respond next Saturday against North Melbourne in Hobart, while the Blues host St Kilda at Ikon Park on Saturday night.