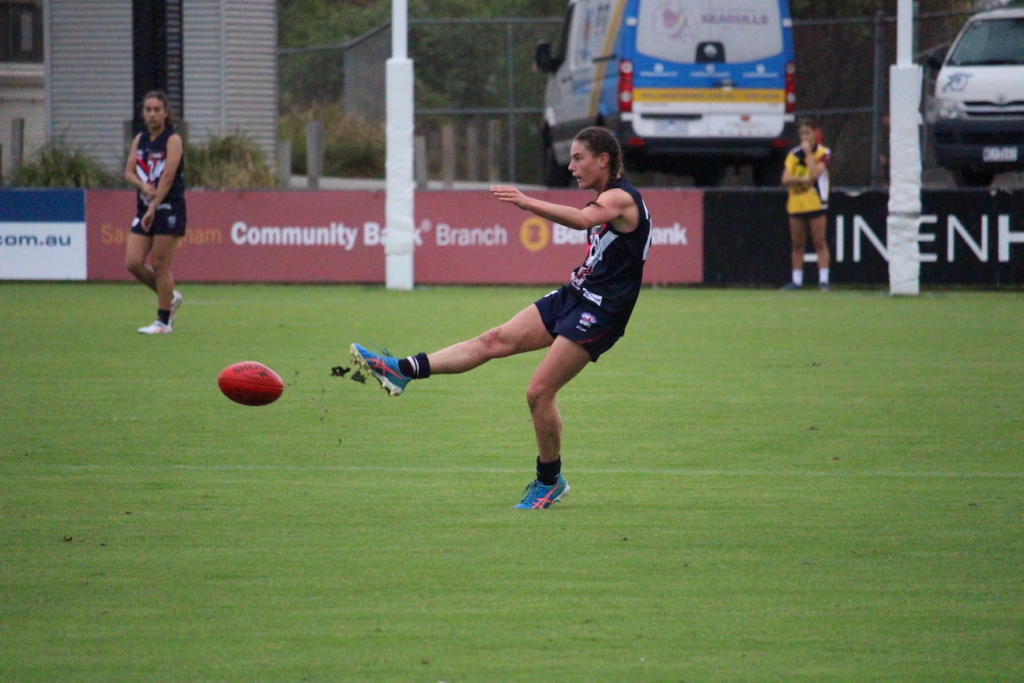 SANDRINGHAM Dragons are excited about the development from their existing players and the potential for future development of the entire list, ahead of the 2020 season. The NAB League Girls head coach, Tamara Hyett said the pre-season had been a successful one and now with a strong core group of top-agers and some promising middle and bottom-agers, the Dragons were in a good position for the foreseeable future.

“It’s been good, we’ve been able to get the full squad out on the track throughout the full pre-season,” Hyett said. “We’ve been lucky enough, we’ve had a good squad of top-agers as well as some really strong bottom-agers coming into the system so we’ve got a really good balance across all three age groups which has been good. “We’ve had a really solid pre-season, we’ve been able to build on what we’ve been able to do the last couple of years. “We’ve got a similar coaching group so a lot of the top-age girls have been with us – this will be their third year – so we’ve been able to build on and educate a little bit more and educate and filter in new additions to our game plan and game style which is allowing them to show off their strengths now they’ve been in the program for three years.”

Hyett identified four players at top-age level as ones to watch, but said there were a number of players who continued to improve having been in the program for a number of seasons at the elite junior level.

“I think being able to have girls like Alice (Burke), Eliza (McNamara), Sarah Hartwig, Winnie Laing,” Hyett said. “There’s probably six to eight girls who have been in the program for three years now – this will be their third year – so they’ll have an understanding. “They all set elite training standards and behaviours so they’ll all be a really good group at the top-age group. “The rest of the group is buying into what they’re doing and that’s assisting in the development of the new additions to the squad.”

While the top-agers prepare for the final year in the NAB League journey, for a number of 16-year-olds it is only the beginning. They 2004-born players have stepped up over the pre-season, and while they are technically not eligible to be drafted until 2022, are already showing promising signs. Hyett said this was credit to their football journey, saying the group coming through at a bottom-age level had a “really sound” understanding of the fundamentals for Australian rules, and it meant the coaching staff could accelerate the development of the program and go into more in-depth areas to improve players on the list.

“We’ve got some really good bottom-agers, and so much so that we’ve got five bottom-agers with one being an emergency that will play Round 1, which I think is really exciting for our program,” Hyett said. “We’re seeing the benefit of girls who have played football from an underage or Auskick level. “They’ve grown up with football and we’re reaping the benefits of that, they’re coming to us with really sound fundamentals and hence why we’re able to progress them a little bit quicker, because in previous years they have had exposure to football from a young age. “We’re seeing some really good signs from Bridie Hipwell, Lucy Mitchell, Sofia Hurley, Tayla Jones and Holly Tysoe as well. “All of those girls will play their first game and they’re all bottom-agers. “I think it’s exciting for the competition, but for our club that we have these girls who are good enough and ready for Round 1.”

On the track over the pre-season, Hyett said there was a noticeable difference as to just how prepared the bottom-age players were to adapting within the group. She said it was credit to the players both returning and new to the club for “investing in their own development” and doing the extra yards to improve in any way possible.

“I guess it’s probably how quick the bottom-age girls have adjusted,” Hyett said. “We have a young girl, Tayla Jones who from the Talent ID we knew very little about, but her training standards and her game sense was just really exciting. I think she’ll be one to watch down forward. “Someone like Eliza McNamara who has worked really hard on her football component – she’s always been an elite runner – but it’s using that running power as a weapon and a strength. But it’s funny, the girls who have been in the program for a little bit have definitely added and grown in the off-season. “That’s just by investing in their own development and wanting to learn so, we try and run a 12-month program, but we’ve always got coaches on hand to assist so any extra work the girls want to do, we tend to have big numbers who want to do more, which is great. “Constantly investing in their own development outside of Dragons training.”

Hyett also named Abbi Moloney as one to watch this season, with the 171cm forward possessing a “beautiful pair of hands”, capable of clunking some good marks and a “work horse” who crashes packs and brings the ball to ground. The Sandringham Dragons coach said if the team could provide the top-ager with good service inside 50, then Moloney could be in for a good year. She said good service inside 50 would require strong defensive pressure up the ground and fast ball movement.

“We want to be fierce,” Hyett said. “We want to be a really fierce and aggressive team, but I guess that’s no surprise to the other team’s that we’re quite small, so we’ll still be looking to run and carry and move the ball quickly and that’s just because we’re not an overly tall side so we want to play to our strengths which we think is that run and carry and quick ball movement. “Get the ball out into space, so I guess whether that’s giving up our secrets or not, it will be visible after Round 1 anyway. “We just want the players to have the freedom to play really attacking football and play on instincts as well. “We’ve got some team structures that we want to maintain, but we also don’t want to take away that natural instinct and gut feel. “The players sometimes get over-educated and lose that creativity and instinct from their game so we want to encourage that.”

In terms of players having new roles, Hyett said there would be no “drastic” changes, but a number of the Dragons’ top-agers would be moved around to further their development and showcase their versatility in a variety of positions.

“What we’ve also tried to do is we don’t want girls to get bogged down in one position,” she said. “We think that clubs are definitely looking for that dual position player, and with 16-a-side now it’s really important that they have a couple of strings to their bow. So we’ll see someone like Sarah Hartwig spend some time in the midfield, Alice Burke might spend a little bit more time across half-back and someone like Eliza McNamara spending a little bit more time spending forward rather than just mid because we want to expose their offensive skills as well as their other attributes. “We want them to be creative, so we’ll slip a few players around here and there, but nothing too surprising. “For us it’s about showing off the players strengths, so that’s what we’ve been all about this pre-season.”

Heading into Round 1, Hyett said the Dragons have had a couple of practice matches along with some intra club games, which has enabled them to put some of the aspects they had been working on over the pre-season into practice. She said it was “really pleasing” to see the players willing to implement the new tools into their game and that the side was ready to tackle the new season which starts this Saturday against the Greater Western Victoria (GWV) Rebels at City Oval in Ballarat.

“From our end we’ve been really happy with the preparation,” Hyett said. “We’ve got some things we want to tick off on Saturday and if we can do that, we’ll be really happy. “Our objective is to stick to what we know, we can’t control what the other side does, but we just want to play our brand of football. “We think that has the potential to get us small wins and losses, but if we can show continual growth, that’s all we’re asking of our players.”