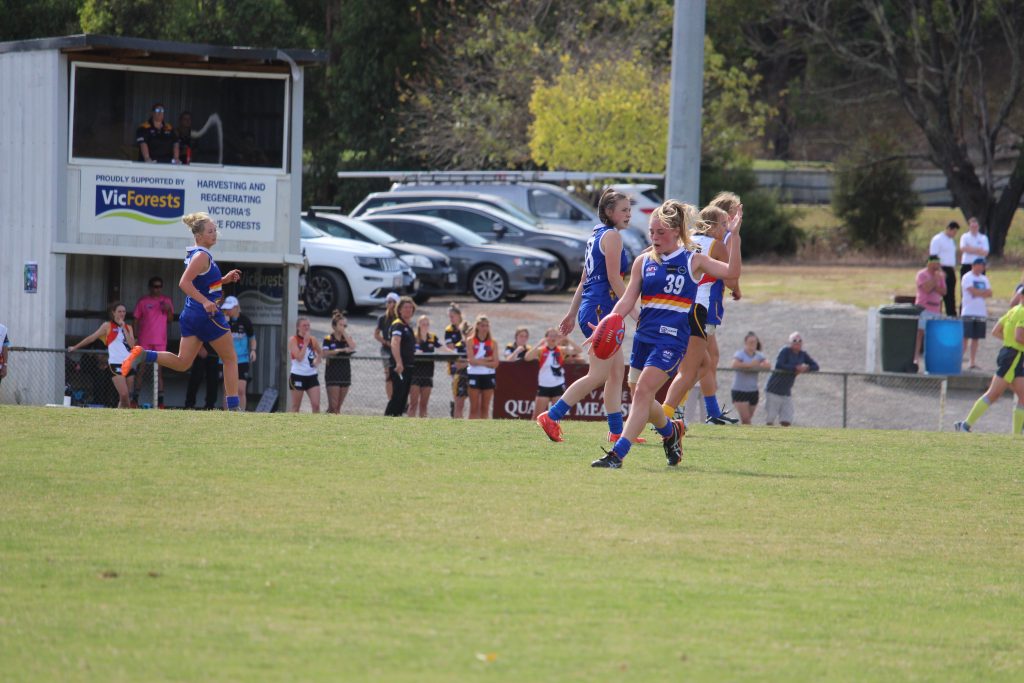 The first game of the round is a fitting opener to the new NAB League Girls season, with Northern Knights hosting Calder Cannons at a refurbished RMIT University ground in the 2019 Grand Final rematch. The Knights had five players drafted last year, with the remainder signed up for state league level football in 2020, while the Cannons just had the two, but had a number of players on the periphery. Both these sides have plenty of talent with the Knights potentially a year ahead in development, finishing runner-up in 2018 before winning last year, while the Cannons made the grand final last season, and will be hoping to build on that this year. The Knights have five players in the National AFL Women’s Academy, led by Ellie McKenzie and last year’s grand final best on ground medallist, Jess Fitzgerald who are both amongst a strong midfield core. Fellow Academy member, Maeve Chaplin is also named onball, while Maykaylah Appleby will run down the wings as the sole middle-age Academy member. Alyssa Bannan is a leading target and strong overhead named at centre half-forward, and a battle with the likes of key backs, Tamsin Crook and Tahlia Gillard – the latter of whom is in the AFL Women’s Academy too will be a match-up to watch. The name that will always catch the eye is Georgie Prespakis, a 2021 draft prospect and sister of Carlton Rising Star, Madison. She is capable of anything and her battle with McKenzie will be intriguing. The Cannons also have some serious depth at their disposal, with Emelia Yassir and Kasey Lennox another couple of youngsters who made their debuts last season and looked at home. With Freda Puruntatameri playing with Palmerston in the NTFL Women’s competition up forward for the Cannons, there is plenty of X-factor there too.

Up in Ballarat, the Greater Western Victoria (GWV) Rebels host the Sandringham Dragons in a battle between two sides who should improve on their 2019 placings. Both sides have a number of AFL Women’s Academy member with the Rebels (five) and the Dragons (three) both having some serious top-end talent. The Rebels have a strong spine with Maggie Caris likely to be the top ruck in the competition this year with her height and tap work causing problems for the opposition. Renee Saulitis has played up forward and down back, but is named in the middle, with her athleticism and ability to sidestep opponents a feature of her game. Along with Isabella Simmons who has also been named through the midfield, all three Academy members are very different and add varied elements to the game style. They will face an equally impressive midfield of Dragons’ captain Winnie Laing, potential St Kilda father-daughter selection, Alice Burke and Bella Eddey who provide a real hard edge to the onball brigade. Sarah Hartwig is one of a couple of premier rebounding defenders, reading the ball in flight so well and able to create a lot of offensive run while nullifying her opponent defensively. Playing at half-forward is Eliza McNamara who is a tackling machine and elite runner, who will work her opponent over, while Abbi Moloney lines up at full-forward to try and clunk a few grabs by outmuscling her opponent one-on-one. The Rebels will look to run the ball out of defence through Nyakoat Dojiok who is a 2021 draft prospect in the Academy, while Chloe Leonard has been named at full-forward for the Rebels who will look to have a spread of goalkickers rather than a dominant target.

After its first finals loss last season, Geelong Falcons return to the NAB League Girls with a hunger to get back to the heights of 2018, starting off the 2020 season with a clash against Gippsland Power. The Power have a lot of players who were able to run out last season and will be more experienced in 2020, so they will no doubt look to push the Falcons who have plenty of young players themselves. Geelong’s duo of Darcy Moloney and Laura Gardiner will be damaging through the midfield as the Falcons’ two AFL Women’s National Academy members. Joined in the middle by basketballer Carly Remmos, the Falcons have a strong foundation to continue the success of past years. Elizabeth Dowling is a name that will be raised over the next couple of years, and along with Renee Tierney as targets up forward and Poppy Schaap‘s defensive pressure, the Falcons are in a good shape going forward. Mia Van Dyke is one of a number of prospects who have come through the club’s V/Line Cup program and despite being just three days away from being a 2023 draft eligible prospect (only turned 15 in December), she is one of a number who have come through the pathway with some high wraps from the coaching staff. Gippsland has some familiar names in its line-up, led by midfielder and AFL Women’s Academy member, Megan Fitzsimon. She, along with Grace McRae forms a strong midfield duo in there, and will compete strongly for the contested ball. In defence, Shanara Notman returns as a 19-year-old named at centre half-back and will provide some good rebound there, right alongside Leyla Berry who played for the Power back in 2018. On the other flank is a familiar Power name with Yasmin Duursma (sister of Port Adelaide’s Xavier), while when talking about bottom-age talent, Lily-Rose Williamson is one who will be a standout along a win having starred for the club through the V/Line Cup in past years.

Turning the attention to Bendigo, the Pioneers host Western Jets in a curtain raiser to the AFL Women’s clash between Richmond and Geelong. Bendigo has the one official AFL Women’s National Academy member in key defender Tara Slender, but have a midfield that will trouble opposition onballers. Brooke Hards and Annabel Strahan have both been named onball and the co-captains will provide a hard-edge to the midfield and be difficult to beat there. Along with Maeve Tupper who has some impressive athletic skills and great goal sense when up forward, the midfield is a strength for the Pioneers. Jemma Finning has been named at half-back to provide some run out of defence with Slender, while up forward, Hannah Stewart is a target inside 50 as a 19-year-old. The Jets have opted to throw rebounding defender, Isabelle Pritchard into the midfield to counteract the Pioneers’ onball and develop her game even further. Along with bottom-age tall, Montana Ham and Nikita Wright in the middle, the Jets have some good height and ball-winning ability in there with upside. A highly rated bottom-ager with Ham is Charlotte Baskaran who is considered elite with her foot skills and decision making, so will be one to watch coming off half-back where she has been named. Both these sides are going to go close to winning in this tight contest with a fair few bottom-agers on show, though Bendigo should be more prepared after their top-agers had consistency through the team as middle-agers last season.

In a rewind to 2018, Dandenong Stingrays and Eastern Ranges return to Holm Park in Beaconsfield to open their seasons on Sunday. While both played different opponents on that day two years ago, they will both be hoping for more ideal temperatures than the 37 degrees on that day. The Stingrays are coming off a solid season in 2019. just missing out on finals, while Eastern reached the post-season series and pushed eventual premiers, Northern Knights all the way in the preliminary final clash. The Stingrays’ standout prospect in 2020 is Tyanna Smith, with the AFL Women’s National Academy member having the combination of speed and strength in the middle, which she will use to burst out of the stoppages and create scoring opportunities for her team. Abbey Jordan showed last season she can win the ball through the middle, while young talls, Jaide Anthony and Georgia Grimmer up forward provide a glimpse into the future for the Stingrays having come through the V/Line Cup program. Down back, the ever-reliable Zoe Hill is alongside Jemma Radford, while Serene Vudiniabola comes highly rated as an overager who played school footy last year and is tied to Old Haileybury. Eastern Ranges pack a punch in the midfield as well, with Olivia Meagher and Tarni Brown the club’s two AFL Women’s Academy members. With ruck, Jess Grace likely to get first hands to them more often than not, the contested ball-winning Meagher and slick Brown will give their forwards some nice feeds inside 50. Matilda Hardy has been named at half-forward as one to watch, while Mietta Kendall is a reliable source of calmness in the back pocket, and Lily Peacock named as one to watch with her run along the wing.

The final game of the round is another curtain raiser, this time for the Collingwood and Richmond AFL Marsh Series clash at Wangaratta. A big crowd is expected in attendance for the game, with two teams expected to improve in 2020 to battle it out. Murray Bushrangers and Oakleigh Chargers both had some superb performances last season, but had to iron out some consistency issues at times. Both having a number of talents coming through the ranks this season, the Bushrangers had a lot of middle and bottom-agers last season who have progressed through to the next year of their youth careers. The Charges had five players drafted and will be looking to replace them through a team approach. The Chargers have three players in the AFL Women’s National Academy with captain Mimi Hill and middle-ager Charlie Rowbottom named on-ball to rove the work of ruck, Kalarni Kearns. Also in the midfield is Joanna Lin on the wing, working the ball forward to an even front six. The Bushrangers have a two-pronged tall attack with AFL Women’s Academy members, Olivia Barber (top-age) and Ally Morphett (middle-age) rotating between ruck and forward. Abby Favell is a natural ball winner and will rotate between midfield and forward, while Kate Adams is another player who can be slippery around the stoppages and find the goals when inside 50. Keeley Skepper showed last season in the Under 16 Championships that she has a lot of upside, while a number of players on both teams loom as surprise packets in what could be one of the games of the round.