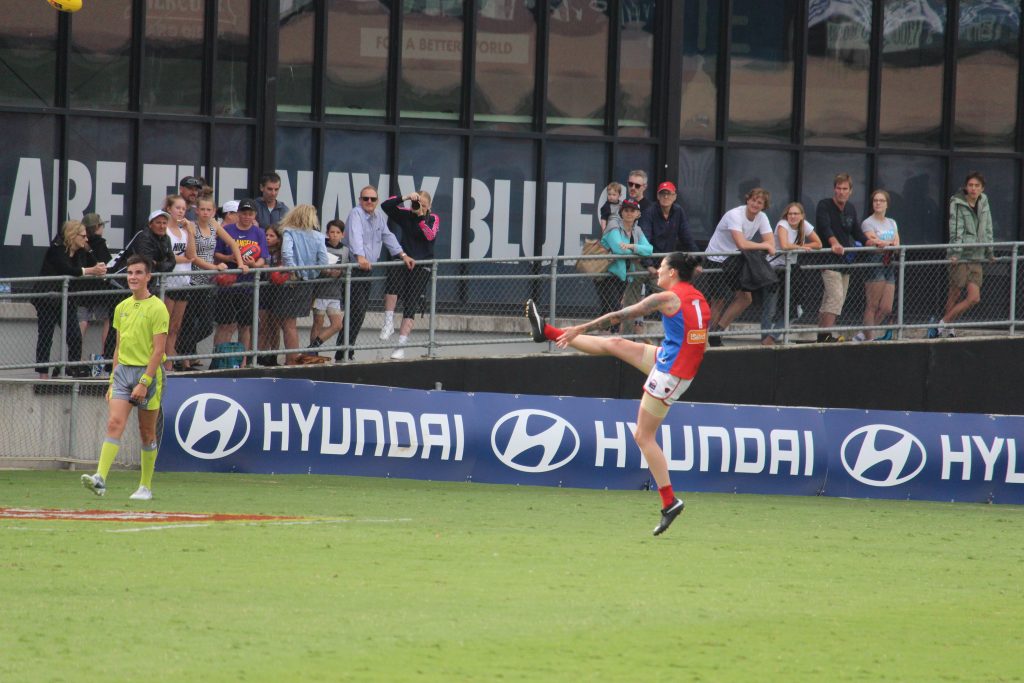 WITH three rounds of the AFL Women’s done and dusted we pose five questions surrounding yet another  round of action filled with narrow losses and blowout wins.

Are Fremantle the real deal?

The Dockers showed their class last round with a narrow three-point win against the Magpies, sitting undefeated at the top of Pool B. Fremantle has become well known for its attacking style of play always looking to hit the scoreboard and move the ball forward and while they were starved of opportunities in Round 3 they made the most of their chances with accuracy proving no issue. They have a plethora of key players across the field that have shown that they can lift their game when under pressure and while both Ebony and Kara Antonio did not win a truckload of possession it was what they did with the footy that made the difference. The mix between experience and youth is the key combination with Mim Strom and Roxy Roux making a seamless transition into the elite level while the likes of Kiara Bowers and Sabreena Duffy have continued to evolve making for a very strong and competitive side.

What do Richmond need to do to win their first game?

The Tigers are yet to claim a win in season 2020 but definitely have the star power to cause a couple of upsets with the likes of Monique Conti, Sabrina Frederick and captain Katie Brennan amongst the mix. They have shown that they know what it takes to match it with the best but have struggled to put up a consistent four quarter effort getting blown away as the game dragged on. The trio have experience and ooze class and composure with all three hoping to make an impact in their new colours but failing to really get going so far in 2020. Renowned for her ability to win the ball at the coalface and dispose of the footy cleanly Conti will have to up her intensity while Brennan and Frederick will need to hit the scoreboard more regularly. But to win their first game they will need assistance from the likes of Christina Bernardi, Lauren Tesoriero and Phoebe Monahan to help take the heavy load off them across the ground.

Can North Melbourne win the premiership?

After falling short of finals last year, the Kangaroos have come back with a real vengeance in 2020 with convincing wins in their past two outings. North has shown that it can pile on a hefty total, recording a whopping 76 points last round with 12 goals making up the end score. The Roos are a class outfit that can pick apart their opponents with their attacking momentum and variety of avenues to goal. Emma Kearney is a machine through the midfield and has shown that she can push forward and hit the scoreboard coming off a three goal and 12 disposal game while Kaitlyn Ashmore is a handy option inside forward with three majors. Jasmine Garner and Jenna Bruton have upped their ante in recent weeks adding to the already potent side.

Could Melbourne be a smoky to make the finals?

Despite dropping their Round 3 clash to the Saints the Dees should not be underestimated. They toppled premiership favourites North Melbourne in the opening round of the season and dismantled the Dogs by 20 points in Round 2 highlighting just how damaging they can be when they get going. Although inaccuracy plagued them in their recent outing, they have proven that they have a wealth of options inside forward 50 that can cause damage with Tegan Cunningham and Kate Hore strong in front of goal while through the midfield Elise O’Dea, Daisy Pearce and Karen Paxman provide good first use to their forwards.

Can Brisbane continue their hot form?

Although they played out a draw last week against state rivals Gold Coast, the Lions have taken the competition by storm downing both Geelong and reigning premiers Adelaide in the opening rounds. With two wins and a draw the Lions are sitting pretty on top of the table and will be hoping to hold onto that spot. Brisbane have allowed their young talent to lead the way with the likes of Isabel Dawes, Lily Postlethwaite and Jesse Wardlaw doing the hard yards. Sophie Conway has also been in hot form in recent weeks and will be hoping to keep that streak going and push her side to another grand final. The midfield brigade of Ally Anderson, Lauren Arnell and Emily Bates along with defender Kate Lutkins have also been in scintillating form.