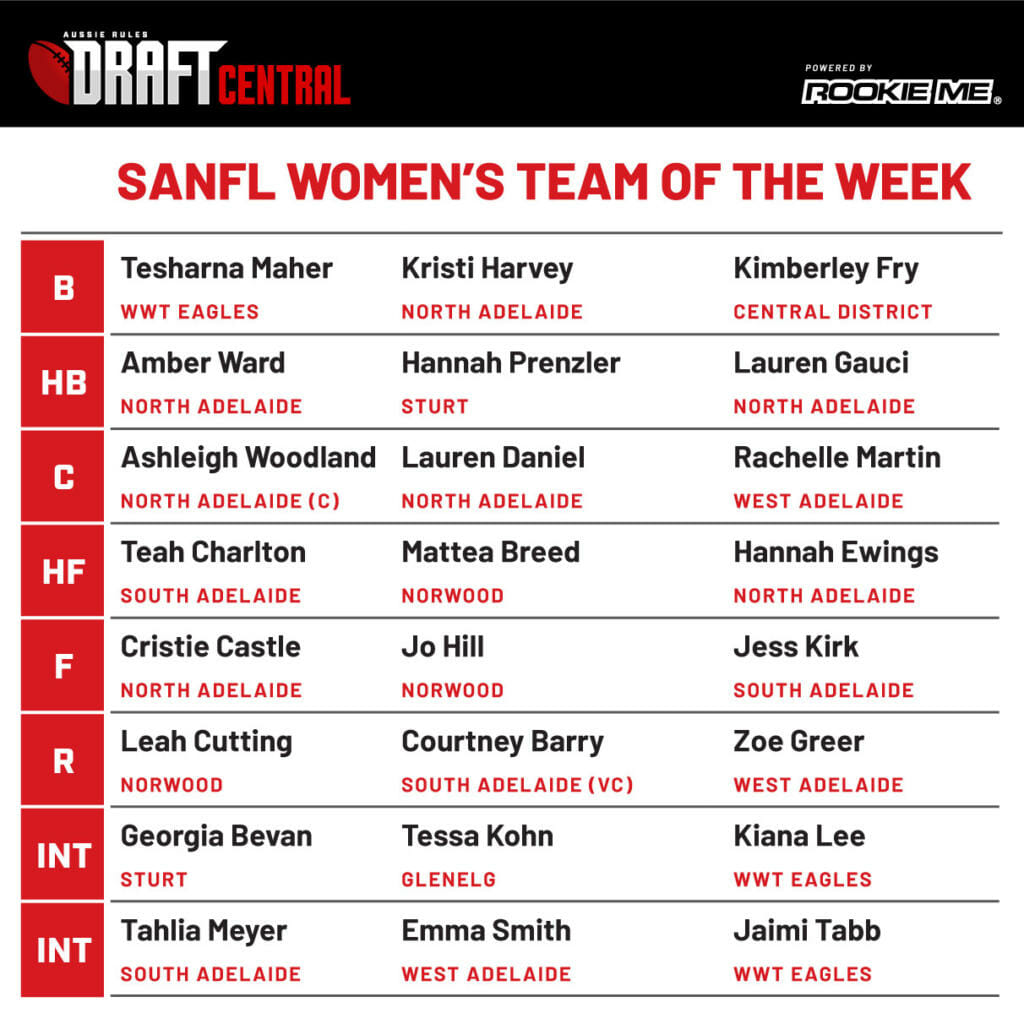 IT was seventh heaven for North Adelaide in our Draft Central Team of the Week for the South Australian National Football League (SANFL) Women’s competition in Round 2. The Roosters had a huge win on Saturday to maintain top spot on the table and they were rewarded with a record seven players in the 24-player team. A record unlikely to be beaten for some time, they covered all three areas of the ground and were remarkably all on the field as well. The other four winners in South Adelaide (four), West Adelaide (three) and Norwood (three) all had strong representation, as did narrow losers, Woodville-West Torrens (three), Sturt (two), Central District (one) and Glenelg (one) were well beaten on the weekend, but still managed to have representatives in the side.

The next best haul was South Adelaide with four players making the side and a number of unlucky talents just missing out. Potential top pick, Teah Charlton was named at half-forward after a stunning game of 24 disposals, three marks (one contested), five tackles, four clearances and five inside 50s, while Jess Kirk – who really turned it on up forward – is named in the pocked after an effective three goals from six touches and three marks (two contested), with a couple of behinds which potentially could have been more majors. Onball, Courtney Barry was the best of the lot, named vice-captain of our side following her 20 disposals, one mark, 10 tackles, nine clearances, two inside 50s and two rebounds. Rounding out the quartet is Tahlia Meyer who had the 21 disposals, three marks, three tackles and one goal on the day. Two players from their opponents in the match made our team, with reliable defender Hannah Prenzler (15 disposals, six marks, three tackles and four rebounds) and co-captain Georgia Bevan (19 disposals, three marks, eight tackles, three inside 50s and three rebounds) making the side once again.

Another big winner on the weekend was West Adelaide, with such an even team performance making it hard to just select a few. Rachelle Martin made the side once again after 21 disposals, one mark, four tackles, five clearances, four inside 50s and three behinds – which meant she could have had even more of an impact – while Zoe Greer is right alongside her in the midfield with 18 disposals, 12 tackles, eight clearances and two inside 50s for the player named rover in the side. Emma Smith squeezes onto a stacked interchange after 15 disposals, four marks, 10 tackles and two clearances, right alongside another 10-tackle player in Jaimi Tabb with the Woodville-West Eagles midfielder also notching up 16 disposals, two marks and six inside 50s in her side’s loss to Norwood. Along with Tabb, Tesharna Maher made the side once again in the back pocket thanks to 12 disposals, two marks, two tackles, two inside 50s and four rebounds, while Kiana Lee‘s three first half goals from nine disposals, three contested marks and four tackles earned her a spot in the team.

Norwood’s one-point win over the Eagles could be in part thanks to its spine, with ruck Leah Cutting named the top ruck for the round following 13 disposals, two contested marks, six tackles, 23 hitouts, two clearances and four inside 50s. Up forward, Mattea Breed and Jo Hill fill out the key position spots after Breed racked up 21 touches, three marks (one contested), five tackles, four clearances, six inside 50s and two rebounds, while Hill booted 3.1 from 10 disposals and three marks (two contested). Of the remaining two sides, they each had a representative, with Central District’s Kimberley Fry making the team for her steadfast work in the back 50, picking up eight disposals, two tackles and four rebounds, while Glenelg’s Tessa Kohn had 11 touches, two marks (one contested), seven tackles and four clearances in the Tigers’ loss.

Picking a team was so tough this round that genuinely there were 33 players that were initially in the squad with six having to be omitted just to fit the team. West Adelaide’s Melanie Elsegood and Keeley Kustermann, South Adelaide’s Montana McKinnon, Sturt’s Maya Rigter, Norwood’s Matilda Zander and Sophie Armitstead, Central’s Demi Sonneman and Danielle Stewart, and Glenelg’s Soriah Moon all were on the short list but narrowly missed out. Others who were also considered after impressive performances were West Adelaide’s Abbie Ballard and Zoe Venning, North Adelaide’s Kathryn Reynolds, Glenelg’s Chelsea Packer, South Adelaide’s Elyse Haylock and Woodville-West Torrens’ Stephanie Walker. With so much to consider, the final decision of the 24 came down to more team balance, with a number of talls roaming the forward line, the bench was prioritised by smaller players to ensure the team was not too top-heavy and resembled a realistic side. With the quality coming through, it will only get tougher to pick each week.

DRAFT CENTRAL SANFL WOMEN’S TEAM OF THE WEEK: ROUND 2