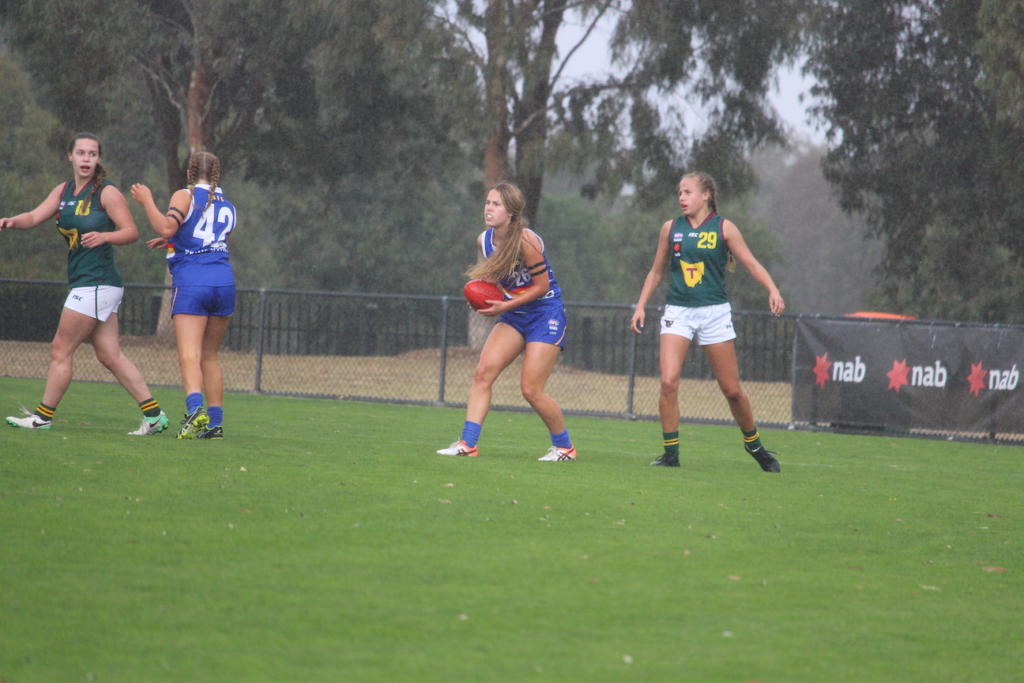 A NEW-LOOK coaching panel at the Eastern Ranges will lead the NAB League Girls’ into the 2020 season, as a number of girls enter their top-age year having been in the program for three seasons. Female Talent Coordinator, Jessie Mulholland said it was an exciting off-season with so many returning and fresh faces adding depth to the squad.

“We trialled about 120 girls … and so to see that talent is in our area now is really exciting,” she said. “Last year we were pretty bottom-age heavy in talent and the girls that have been in the program for three years, finally get their turn to be top agers, so we look pretty good. “Staffing has changed completely as well new head coach, all of our line coaches are new into that line as well so for us at Ranges we’re really excited for the year.”

It is not just the playing group that has a new look, with line coaches and even a fresh head coach taking over the role. Chris Pope might be a new name in that role, but has been a highly valued member of the Ranges’ coaching staff for some time.

“Chris has been in our program as a senior assistant for the past three seasons and is very well known within the group and obviously the Ranges community,” Mulholland said. “He has come in and taken it by the horns and is doing a really great job pulling all the girls together and the staff as well as I mentioned a few of the staff members have changed or moved on to bring us as close as we have in the three months he has done a really incredible job with the group.”

On the field, Eastern has a number of standouts including a couple of players in the AFL Women’s National Academy who have been working hard building on their already identified talent as they work towards the biggest year in their footballing journey do-date.

“We have two academy girls in Liv (Olivia) Meagher and Tarni Brown, they’re doing really well on and off the field,” Mulholland said. “Everything they are doing with the academy and with us, their football skills it’s finally their year to be top-agers, so they are really exciting to watch. “We’ve also got Mietta Kendall and Jess Grace who have been in the program three or four years as well. “Mietta down back who you know is always reliable and always willing to pick up the ball and run. “Grace with her ruck work as well and we’ve got a 19-year-old as well with Lily Peacock who played six games of senior footy last year within the region and never played any before and is an elite runner. “So we are pretty excited to have her in the squad as well.”

In the past, Eastern Ranges have been able to help develop players from other codes and help them live out their AFL Women’s dream. Two years ago, former sprinter Mikala Cann went to Collingwood, and last year it was Victorian Netball League (VNL) netballer, Serena Gibbs who landed at Carlton. In 2020, Mulholland said there were a few cross-coders in the program, including VNL netballers with plenty of development left in them, Saskia Nannes and Keeley Sherar.

“Yeah Lily with her running off the wing, at the moment trying to get all the footy IQ into her as fast as possible, but probably not with Serena’s height,” she said. “We’ve got a few VNL netballers as well but they’ve got two more years in our program. “A lot of it has to do with the girls and their mindset so they know what an elite program looks like and what is expected from them on and off the field and they are willing to learn and they want to soak it up if not more than anybody else that comes into the program. “So a lot of the credit goes to those two girls and every dual athlete that comes into our program.”

Last year the Ranges made the finals, going agonisingly close to knocking off eventual premiers, Northern Knights in the preliminary final but just falling short. While the players were naturally disappointed after the game, Mulholland said the club could not be more proud of the way they represented themselves out there on Shepley Oval.

“Yeah it was bittersweet,” Mulholland said. “It was probably the best game we played the entire year, so to go out like that we were really proud of the way that we played and the result obviously didn’t go our way but you know that’s football. “We were super proud and you know obviously they’ll (players) be upset, but looking at the vision … we played the best we could and you know it was great.”

The season is nearing this weekend and Mulholland said the club had ramped up its preparation with a practice match providing the perfect place for trialling players in various positions. The Eastern Ranges’ Female Talent Coordinator described the match as “full on” with trying to manage the workloads and even spread of the players.

Meagher will lead the squad in 2020, becoming the first sole captain at the Ranges, while Kendall will be vice-captain, as part of a six-player leadership group.

“For the past three/four seasons we’ve had dual captains so this year we’ve gone with just Liv Meagher as our captain and Mietta Kendall as our vice captain,” she said. “We’ve got Jess Grace, Eloise Chaston who’s a newbie coming into the program after having ankle surgery at the back of local season last year, Bridget Deed and Tarni Brown in the leadership group as well.”

Now with the pre-season done, Mulholland said all the players and staff were excited about tackling Round 1 on the weekend when they head to Beaconsfield to take on the Dandenong Stingrays.

“I think everything we have done on and off the field at Ranges is completely different to the past three seasons,” she said. “We went to camp and worked on our culture and our values so that was something the girls probably haven’t owned for themselves and [it’s] much tighter group I think than previously, so we are just playing the week as per normal. “We have had three praccy matches leading into so it has sort of become the norm and we wont put any pressure on the girls for the win. “That’s not what we are here to do, if the girls can develop as players then we’ve done our job.”