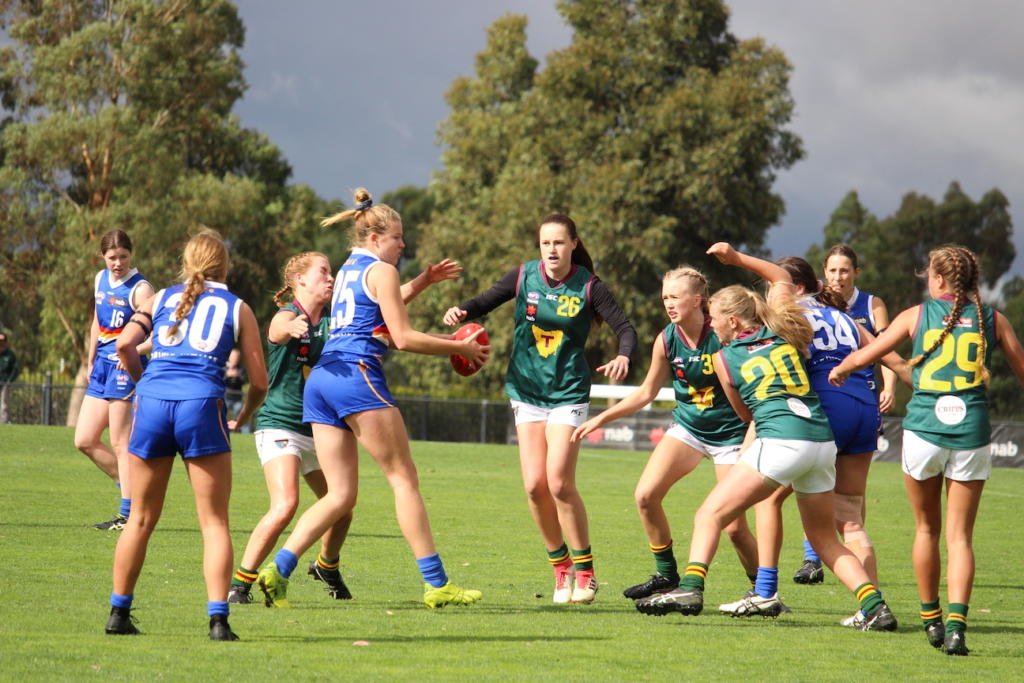 TASMANIA Devils’ NAB League Girls program will enter its inaugural full-time season in 2020 after getting a taste of the previously sole-Victorian competition. While other academies will feature throughout the NAB League Girls season, Tasmania is a permanent fixture in the league having managed three games last season.

In 2019, the Devils had a jam-packed weekend to face Western Jets and Eastern Ranges at Craigieburn, then returned for the first week of finals where they played the fifth placed Oakleigh Chargers. From the 2019 list, Mia King was picked up by North Melbourne, following on from previous Tasmanians, Ellyse Gamble, Daria Bannister, Courtney Webb, and Chloe and Libby Haines. Tasmania Devils Female Talent Coordinator, Leigh Elder said the success of these players was great for the pathway.

“The impact of all the girls being drafted has been nothing but positive,” Elder said. “Especially in the participation space as it has shown to girls in Tasmania you can live your dreams and stay in the state, with Bannister, Haines twins and Mia King all residing in Tasmania and on an AFLW list.”

While the Devils did get a taste of the NAB League Girls competition last year, Elder said the majority of the list featured players who were yet to compete at that level.

“Only ten players of our squad of 43 had the experience to play NAB League games last year, so although we can discuss the intensity required for the level it is only their experience that will make them understand what it takes to achieve at the level,” Elder said.

Due to the location of the team, the Devils were limited to match simulation over the off-season, and Elder said internally it appeared speed would be a key feature for the group, but it was hard to compare to other regions. He was pleased with the effort put in by the players over the pre-season and had already seen promising signs.

“It has been a rewarding preseason seeing our player develop and take on the challenge of entering a competition at this level,” Elder said. “We train in three regions during the week and combine one in the middle of the state on the weekends during preseason.”

As a first-year side it is also hard to get a gauge on on-field performance, but like every side in the NAB League Girls, development is the number one priority for the team from the Apple Isle.

“Our program is about developing talent and to build better players and better people and we will use the first month in the competition to simply educate the players on what is required,” Elder said. “The win/loss record will not determine our success, the development of the players will.” “Without a practice match, (and a) bye in Round 1 we expect to be slow starters in the competition and we really look forward to the challenge of the competition and thank all the regions for their support and helping provide an opportunity for our girls.”

Over the pre-season a number of new faces have popped up as strong performers on the track, as well as an overage tall and middle-age AFL Women’s National Academy member.

“Meghan Gaffney from Ulverstone in the North West and Zoe Bourne from North Launceston are two players new to the program  who have been exceptional since they commenced in the program and expected to have plenty of opportunities through the midfield this season,” Elder said. “Camilla Taylor is a 19 year old athletic ruck/forward who missed the majority of last season with injury and has returned without missing a beat this preseason. “Amy Prokopiec (is an) U17 National Academy player who plays a key defensive role, reads the play and uses the ball well.”

Elder said the team had a couple of cross-coders who were testing themselves out with the oblong ball and would be interesting to see how they perform in season 2020.

“Amy Bissett who has a soccer background looks like a dangerous small forward,” he said. “Later in the season we may see a couple of developing talls that will be playing their first season of football this year, including 181cm Charlie Vanderburg who is a state hockey representative.”

“The experience and guidance from those involved in NAB League last year has been of great assistance heading into our first NAB League Girls season,” he said. “(The) Devils program is one, using the same facilities, gyms and quite a few of the staff assist or work with both programs.  “Cam Joyce has been fantastic in his approach to help Emma Humphries in her first year of coaching NAB League Girls.”