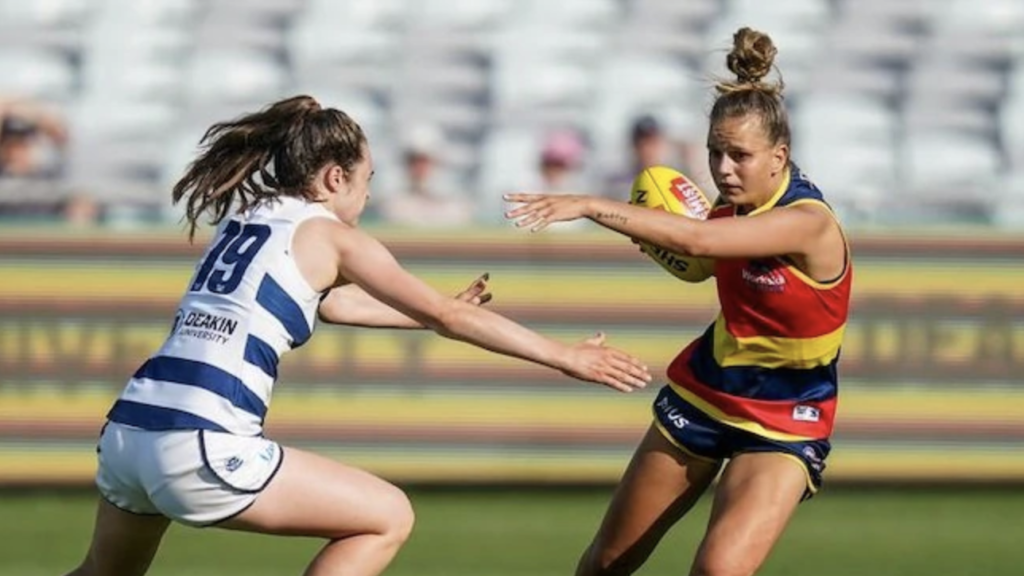 ADELAIDE has held on to win a thriller against the Cats by 11 points at GMHBA Stadium to record back-to-back wins and hand Geelong a third straight defeat to open the season. Although the Crows led from late in the first quarter, Geelong played with great desperation and were in the match until the final moments. The majority of the game was played in Adelaide’s forward half, as they had 25 more inside 50s and dominated the clearances 32 to 15.

Geelong attempted to use the corridor through a short-kicking game style, and Danielle Higgins got them off to a flyer with a nice front and centre goal. After Chelsea Biddell kicked her first, some sloppy defending from the visitors allowed Phoebe McWilliams’ kick to dribble through for Geelong’s second. Danielle Ponter then showed her class, kicking back-to-back set shots to give her side a six-point lead at the first break.

The Crows started strongly in the second, with youngster Nikki Gore earning a free kick and kicking a nice goal. Higgins responded with her second, but some elite tackling pressure from Adelaide allowed Biddell to kick another, giving them a two-goal half time lead. Jordan Ivey used her sharp left boot to create a something out of nothing at the start of the third, setting up Madeleine Boyd for an open goal. The Cats had multiple opportunities to hit the front but inaccuracy cost them, and Ponter only needed one half-chance to kick an unbelievable goal and extend Adelaide’s lead. Olivia Purcell kicked a clever snap goal out of a stoppage to bring the margin back to five points at the final change.

Umpires let the game go more in the last quarter, so it was very tough and congested. Things stayed that way until Eloise Jones picked the pocket of Melissa Hickey and kicked a beauty to give the Crows a bit of breathing space. Richelle Cranston then dribbled a ripper from the pocket to bring the margin back to five points as the home crowd got behind their side. With less than a minute to go, a contentious decision against Maddy McMahon for a deliberate rushed behind allowed Ponter to kick the sealer.

Ebony Marinoff was the star for the Crows, dominating at stoppages and around the ground with 25 disposals and 12 tackles. Ponter was magnificent with four majors up forward, while Jess Foley and Marijana Rajcic played important roles in defence. For the Cats, McWilliams had a strong presence at centre-half forward and took four marks to go with her 12 disposals and a goal, while Ivey and Nina Morrison showed class with ball-in-hand but also combined for 14 tackles.

Now with a 2-1 winning record, the Crows return home to face Carlton in a grand final rematch on Sunday. Meanwhile, Geelong will look to register their first win of the season against the struggling Tigers on Saturday at Queen Elizabeth Oval.