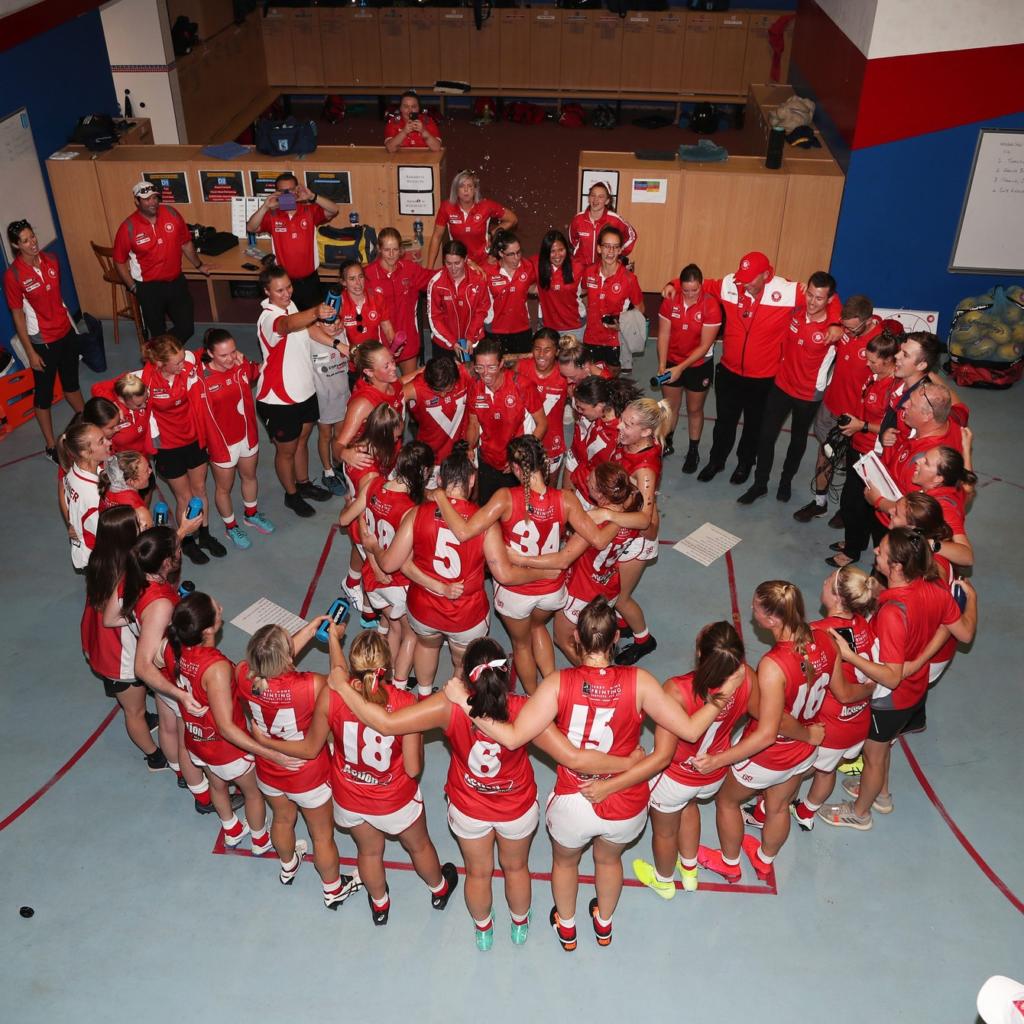 AT least one team will suffer its first loss in Round 2, while another will get on the board with its first win in the South Australian National Football League (SANFL) Women’s competition, as a blockbuster Friday night is planned across two venues. The undefeated clash between Central District and North Adelaide then takes place on Saturday morning in what could be a blockbuster match.

Opening up the second round of the SANFL Women’s is a clash between two sides with differing results from the opening round of action. Glenelg went down to North Adelaide by 24 points at X Convenience Oval on the back of conceding six consecutive goals, while West Adelaide ran out 21-point winners over Sturt in the game immediately after that contest. Looking across both games, Glenelg had the much higher efficiency, running at 73 per cent in a match that was higher skilled against the Roosters, while the Westies had a 61 per cent efficiency against Sturt, but got the job done. The Tigers dominated the hitouts (+8) and clearances (+7) but lost the inside 50s (-2) and booted 2.10 for the match in a disappointing effort in front of goal. Had it been 10.2 instead, the Tigers win by 16 points. The Bloods were well beaten in the hitouts (-13) but completely dismantled Sturt in the clearances (+15) and inside 50s (+11), while also laying more tackles (+10). One area the Bloods would want to improve on from Round 1 was the opposition’s uncontested ball movement, with Sturt taking 46 marks to 20. What the Round 1 matches tell us is that Glenelg need to make more of its chances inside 50, and limit the influence of West Adelaide’s superb onball division, which included Abbie Ballard – who led the league in disposals with 27 – and Rachelle Martin who both form a damaging contested-ball duo. Glenelg should get first hands to the ball at stoppages with Soriah Moon playing well on debut, and recording more hitouts than the entire West Adelaide side. But with Ballard and Martin combining for 14 hitouts – and ruck Kate Walsh even recording four, it is a tough midfield to combat. Glenelg will rely on the likes of Madisyn Freeman to push up the grounds at times, winning an equal team-high four clearances last week, and if the likes of Sam Franson (two behinds) and Molly Althouse (four marks, two contested) can start to have an impact up forward, then they will be a damaging forward six to combat. Keely Kustermann looked settled last week and covers a lot of ground, while Lauren Rodato is a consistent player in defence for the Bloods. Up forward, Kasia Culhane and Melanie Elsegood both scored multiple goals, and Elsegood could have had a real day out if she put through a few more of her five chances (2.3). West Adelaide will start favourites in this clash due to the onball and forward talent, but Glenelg’s loss last week was not as bad as it might appear on the surface, and it is about taking chances in Round 2.

These two teams also come into this clash with different results from Round 1, but both sides would know they can improve on their output from those respective matches. South Adelaide pulled off the great escape against Woodville-West Torrens, while Sturt suffered a disappointing defeat at the hands of West Adelaide. In that game, the double Blues were well beaten around the contest with the clearances (-15) and the inside 50s (-11) going the way of the Bloods. This all came despite Sturt winning almost double West Adelaide’s hitouts (+13). The area where Sturt impressed was in its outside ball as the Double Blues took 26 more marks (more than double) and had a solid 68 per cent disposal efficiency, playing a kick-first gamestyle. South Adelaide plays a possession-style brand of football, racking up 33 more disposals than the Eagles in Round 1, nullifying the opposition’s ability to get ball to boot with a low kick-to-handball ratio. The Panthers are great at shutting down the outside run, with the Eagles only taking 18 marks to South Adelaide’s 37, while the Panthers also won the hitouts (+4), clearances (+9) and inside 50s (+6). Despite all this going the reigning premiers way, they won by just four points, and it was the defensive pressure of the Eagles that forced them to overuse the ball, and also the visitors’ inaccuracy that helped the Panthers get home. South Adelaide is an incredible side and it will be expected to put out a similar effort against Sturt in shutting down the outside run and making more chances in front of goal. With Montana McKinnon potentially heading back to AFL Women’s after being named in the extend squad, Sturt will have a advantage in the ruck, and the Double Blues’ defensive setup is quite solid, but they cannot afford to be beaten out of the middle again. Stephanie Ratliff and Zoe Prowse were impressive in the ruck last week, with the mobile Prowse also doing her part around the stoppages. Georgia Bevan and Maya Rigter (five combined clearances last week) will have to step up again in this contest, with South Adelaide having the likes of Indy Tahau (eight clearances), Czenya Cavouras (six) and Teah Charlton (four) all standing out as a dominant trio in there. Rachel Dunstan and Hannah Prenzler were able to work hard defensively, with Prenzler picking up two rebounds and seven marks against the Bloods to hold up in the defensive 50. Along with Alysha Healy and Aajiah Jerico, it will be important for the visiting side to hold up back there and drive the ball forward against an unpredictable forward line. South gets a lot of goals out of its midfield, and once it wins the ball, it is hard to stop it being locked in the Panthers’ forward half. Expect South Adelaide to come out firing, with so much depth in its side, but if Sturt can make more of its ruck dominance, then the Double Blues can try and up the tempo and play keepings-off.

Yet to have a win in their short history, Woodville-West Torrens Eagles would be seeing this Friday night clash as a real chance to breakthrough and record a ‘W’. The Eagles came agonisingly close to causing a boilover against reigning premiers South Adelaide on the road, and now take on a Norwood side still finding its feet after so much change in the off-season. With a brand new midfield brigade, the Redlegs still looked solid, but will be better for the run during the loss against Central District last week. Norwood had an extra scoring shot than the Bulldogs, and played their traditional possession style game with 33 more disposals and 30 more marks – including seven more contested – but were not able to capitalise on their inside 50 entries (+7). The Central defence was able to pick-off the attacking forays with eight more rebounds and 16 more tackles. Norwood’s ruck, Leah Cutting is the best in the business and dominated the Bulldogs with 21 more hitouts and that helped the Redlegs win three more clearances too – an area that could further improve considering that ruck work dominance. The Eagles will have seen the pressure that Central applied to the Redlegs and bring much of the same, laying 14 more tackles than the Panthers, and three more rebounds. They will need to make more of their opportunities count as well, booting just three goals from nine scoring chances in Round 1, and you cannot afford to do that every week. The Eagles are not a huge disposal-winning team, but instead have that shared brand of football where everyone plays their role and it seemed to be effective for the most part against a highly-credentialed Panthers side last week. Youngster, Tesharna Maher recorded six rebounds in the loss last round, while Allison Evans had three as the pair patrolled the backline. In the middle, Teagan Usher had a team-high four clearances, but the Eagles will need to muster up more of those by sharking the opposition ruck. The tackling pressure is something that the Eagles had no problems bringing, with Evans and Sophie Zuill both laying eight, and Adele Gibson having a team-high four inside 50s. Kiana Lee was quiet on the scoreboard last week but will be better for the run, taking three contested marks and signalling her intent in the air. In the absence of a number of midfielders who made the step up to AFL Women’s this season, Matilda Zander picked up a game-high 20 touches against the Bulldogs last week, well aided by Alison Ferrall (15) and Lindsay Bigg (14). Mattea Breed was also important in that midfield group with three clearances and four inside 50s, while Jo Hill made the most of her chances up forward with two goals. Sophie Armitstead was the leading clearance worker, and while the Redlegs midfield is still developing, they have the talent to make more opportunities from Cutting’s dominance. Norwood have the runs on the board over past years, but the Eagles arguably looked more impressive last week. It will be an absolute blinder of a game.

The only game in Round 2 that features two Round 1 winners is between the sides that finished second and second last, in 2019. A much improved Central District team outlasted last year’s minor premiers Norwood in a nice little upset to start 2020, while North Adelaide booted six consecutive goals to run out four-goal winners over Glenelg and now sit top of the table. In that win, the Roosters actually had five less disposals and seven less tackles, but were so efficient with their scoring accuracy, capitalising on more chances than the Tigers’ 2.10. North lost both the hitouts (-8) and clearances (-7) but rebounded well to win the inside 50 count (+2) and overall were a more efficient side going forward. They will need to continue that throughout the season, because as impressive as the win was, the Roosters can still improve further. The Bulldogs also had less disposals for greater efficiency which makes this an intriguing match. Central had 33 less touches than Norwood in the win last round, and were beaten on the outside with 30 less marks. But the Bulldogs made more of their chances inside 50 and tackled their way to victory (+16). They were smashed in the ruck (-21) and lost the clearances (-3) and inside-50 (-7) counts, but the Bulldogs defence held firm under the attacks with eight more rebounds. The Bulldogs will not be afraid to make it a contested game, with Shelby Smith (20 touches, five clearances and three tackles) leading the way in Round 1, while Jaymee-Lee Sonneman and Lauren Smith both had the three clearances. Demi Sonneman, Kimberley Fry and Abbey Scheer were reliable in defence with a combined 12 clearances, and then Katelyn Rosenzweig was the dominant force up forward with four goals from five scoring chances and seven disposals. North Adelaide has its own goal-scoring machine in Kelly Barltrop, with last year’s leading goalkicker booting two goals in the Round 1 win to start her season off on the right note, while Cristie Castle was sensational across the ground with 17 touches, six marks (three contested), five clearances, four inside 50s and a goal. Hannah Ewings won the Breakthrough Player for Round 1 after the 16-year-old won 12 disposals and four marks, and also booted a goal on debut. Kristi Harvey will likely have the tough job of containing Rosenzweig in the match, while the likes of Lauren Daniel and Amber Ward provide the offensive run out of the back half. North Adelaide have the experience in big games and go in deserving favourites, but the Bulldogs look to have built on last season and will be up for the fight.