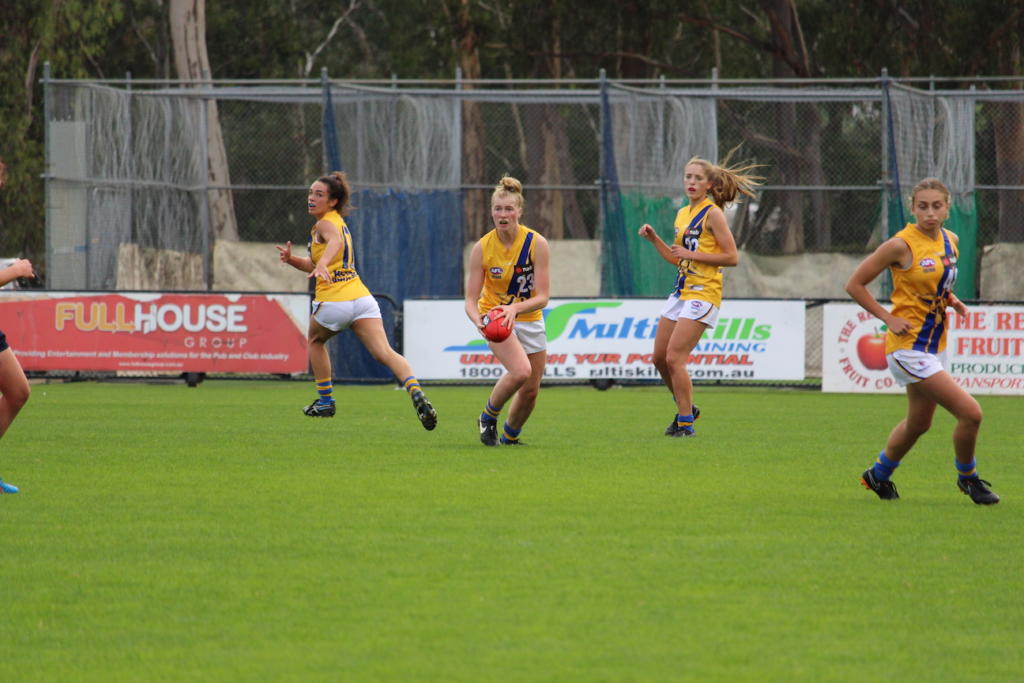 WESTERN Jets now have a “template” that they can use for their NAB League Girls squads after their success at the AFL Women’s Draft last year. Jets Girls’ senior coach, Zachary Read said the club’s five who were drafted – three straight out of the Jets program and an additional two who were former Jets alumni’s – meant the current playing group have players to look up to who had been in their shoes over the past two years.

“The Jets program’s still kind of in its infancy compared to a number of NAB League programs that have been going for a number of years and we’ve never traditionally been results on-field based, it’s always been about the talent and working with the girls to fast-track them for senior local footy, VFLW and of course making it to the AFLW,” Read said. “We were lucky enough to have three girls drafted out of our program last year, but then you have the other two girls in Caitlin Greiser and Sharni Whiting who played a year at VFL level and then got drafted so, whilst not everyone can go straight into the AFLW, to be able to prepare them for the different levels of footy means the door’s still open.”

Along with Greiser and Whiting who played out seasons with Southern Saints and Williamstown respectively, the Jets saw Elisabeth Georgostathis and Isabella Grant (both Western Bulldogs), and Cleo Saxon-Jones (Richmond) all land on AFL Women’s lists. Read said the players had come back to their roots to speak to the girls at training.

“They’ve all come and visited, so Sharni, Cleo Saxon-Jones who’s at Richmond, and the two Doggies girls have all been back to say g’day to the girls at training,” Read said. “One, it energises the group to see their friends go onto bigger and better things, but it’s the first year that we’ve had a template now that we can say ‘these are the girls that you’ve got to try and emulate their training standards, the way they prepare, how they look after themselves because they’ve got to the area you want to get to’ so I think that has helped us drive our training standards on the field a lot more because now we’ve got that tangible person to reference when our girls are striving to improve.”

While there will be plenty of new faces on the field, there is a change off the field, with new Female Talent Coordinator Alex (Agrotis) taking over from inaugural coordinator, Claudia Davey. It might be a new change, but Read praised both Agrotis and boys’ Talent Coordinator, Luke Williams who had done an “awesome” job over the pre-season.

“Luke who oversees the whole Western Jets program, he’s been awesome supporting the girl’s program whilst also managing the boy’s 16s and boy’s 18s,” Read said. “He’s been really charitable with his time while we did find a coordinator in Alex. “She’s hit the ground running too. “She’s awesome, she just allows the coaches and players to be able to focus on training and improving and setting the standards on the track while she looks after everything in the background.”

Having decided the Jets’ squad early last week following a practice match against Dandenong Stingrays, Read said he was excited about the youth coming through.

“The growth in the western region is super exciting,” he said. “It’s a really large pool that we worked with pre-Christmas. “(We) narrowed it down after heading into the Christmas break and probably had another three or four weeks as a group and finalised it last week and had our team-building camp on the weekend.”

Like a number of clubs, the bottom-age talent coming through is among the first to have played football throughout all their junior years and travelled down a more traditional pathway to their predecessors of years gone by. Read agreed with the statement that there are quite a number of 16-year-olds who are forcing their way onto NAB League Girls lists.

“Yeah, and if you look across the league that seems to be the general feel is that we’ve got the 16s now who are probably the first group who have been able to play at every level which is indicative of the youth girls space,” Read said. “We’ve got a couple of 19-year-olds who haven’t played much footy who have been given the opportunity to come back and a couple coming back from injury, so they got some concessions. “Then we’ve got a good crop of 18 and 17-year-olds, and the top-age 16-year-olds. I think there’s a good balance of talent across all the age levels for sure.”

While the bottom-age talent is impressive, the Jets have also brought in a few 19-year-old talents to help strengthen the program.

“We’ve got Olivia Forsyth who missed all of last year with an ACL,” Read said. “So just little steps as we go. “Every training session we get through she gets better and we’re not rushing her to get best on ground Round 1. “We want her to get back into her footy, and she’s a really good character to have around the group which is why we wanted to give her another crack. “Then we have a couple of code-hoppers from basketball and soccer who have some characteristics that are definitely looking like being able to play at a high level, but again we’re not putting any expectations on them.”

Looking at the top-age group, the standout prospect is key defender, Isabelle Pritchard who has already represented Vic Metro as a bottom-ager at the AFL Women’s Under-18 Championships. Read said there was “something special” about the intercept marking machine, and spectators could see her develop further up the ground after ticking all the boxes at half-back.

“She’s going great guns,” he said. “She’s working really closely with Aasta (O’Connor) in the (AFL Women’s Academy) program. “She did it last year and was in as a bottom-age Metro last year and she’s got something special about her. “She competes, one-on-one, they know she can play really good footy at half-back, but we’ll be looking to give her opportunities as a taller, bigger-bodied midfielder going forward and test her in some other areas. “She’s a great kid, really studious. “It’s one thing we preach at the Jets is that AFLW is not a full-time career so we try and develop them in other areas as well whether it’s casual work, studies, whatever it is they might be doing outside of footy, and she’s one that’s really focused on having a good crack at Year 12 and her footy will flow on from that.”

Another couple of watch are those at bottom-age level with Montana Ham and Charlotte Baskaran already showing signs that they will be talents for years to come. Read said Ham had “shot up two feet” and had a competitiveness like few others, admitting she hated to lose at anything, whether it was a match of football or a game of tic-tac-toe. Baskaran is another who has impressed in the pre-season showing off her “elite skills and decision making”, with the bottom-age player already able to kick on both feet and make few mistakes with her ball use. While those two might be ones for the future, Read said there would be a less reliance on individuals and more on team performance, with speed a key characteristic of the Jets’ game.

“I think we’ll be quick,” he said. “I don’t think we’re overly tall, but if you look at the trend of the NAB League to this point, the ball spends a fair bit of time on the deck, so to have some clean, fleet-footed, almost a mosquito fleet running around, will play into our favour. “But we want to play a pretty tall spine to play around, and we’ve got the players to do that, but I think our asset with definitely be our speed.”

Following the hitout with Dandenong a couple of weeks back, the Jets will play their final practice match this Friday night against Calder Cannons at RAMS Arena. Read said the club had been lucky – “touch wood” – with few injuries over the pre-season, praising his staff for their work in keeping everyone fit and healthy. As for expectations heading into 2020, the Western Jets’ coach said there were none.

“We’re just looking to fast-track the girls for whatever footy lays ahead and I think the key focuses for us were improvement on our skills, just having those elite characteristics at training and on game day,” Read said. “They’ll be our two focuses for the year.”