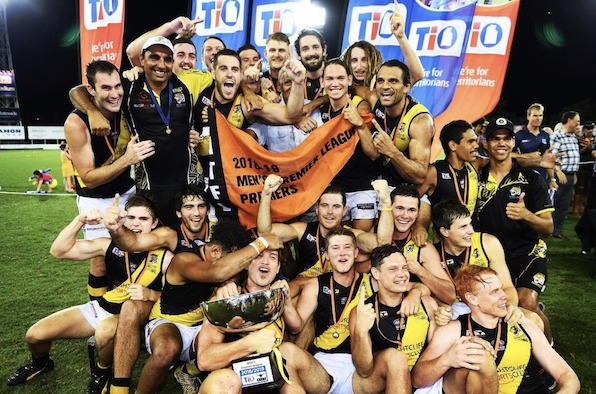 EIGHTEEN rounds of Northern Territory Football League (NTFL) Men’s Premier League football have come and gone, leaving a final five which was clearly ahead of the rest. Reigning premier, Nightcliff will come into the post-season as favourite to defend its crown, but challengers in the form of St Mary’s – the only team to beat them in season 2019/20 – and Tiwi are not far behind. That is not to mention elimination finalists Southern Districts and Darwin, who will both be looking to shake up what is set to be a hotly contested finals series.

The Tigers will be unbackable favourites to go back-to-back this year, which would provide a fitting end to their 17-1 regular season – defeating every side on their way to a near-perfect record. The only blemish on said record was a Round 7 loss to second-ranked side, St Mary’s, but was redeemed just seven games later as the Tigers toppled the Saints by a whopping 65 points. Tiwi was the only other side to get within a goal of Nightcliff, with the minor premier taking on each challenge from finals contenders while also proving ruthless against bottom three opponents. Three players; Daniel Bowles, Kyle Winter-Irving, and Trent Melville played every home-and-away game, with Melville returning another massive goal tally (41) to lead the club in that area. Seventeen-game players Liam Holt-Fitz (30 goals) and Cam Ilett (24) also had no trouble finding the big sticks, while bit-parters Lachlan Sharp and John Butcher combined for 36 majors over just six outings each. Kaine Riley deservedly took out the club’s best and fairest award, named in the best half-dozen in 10 of his 17 games. With plenty of experience and stars on each line, it is not hard to see why Nightcliff has so comprehensively become the competition’s benchmark, but the Tigers will need to stay motivated to claim that deserved flag.

St Mary’s looms as the biggest challenger to Nightcliff’s throne after a 14-4 regular season which saw it finish three games clear in second. During a much-improved season, the 2018/19 wooden spooners were the only side to beat Nightcliff, while only going down to the finals-bound Tigers, Crocs, and Bombers (twice). Despite those thorns in their side, the Saints were just one of two teams to beat every other NTFL club this season, making them the clear best of the rest. Thomas Davies held down the fort for much of the year to be named among the best 12 times across 17 games, while Leroy Larson and Jackson Calder led the goalkicking with 24 apiece. Calder’s average of 2.4 goals per game was superior, with ex-Roo and Blue Jarrad Waite and Dylan Johnstone also proving handy when available, while mainstays Shannon Rioli and Nate Paredes each booted over 20 majors. The returns of Kieren Parnell, Jake Long, Shaun Edwards, and Jackson Geary all lifted Saints’ spirits, while cameos from even more former-AFL players ensured St Mary’s maintained its level of form. That form is good enough to trump any side and given its already formidable resume, St Mary’s is a genuine premiership contender.

Tiwi recaptured the late 2018/19 form which saw it earn a preliminary final berth, overcoming a shaky start to finish the 2019/20 season in third place. The Bombers left it late too, losing in Rounds 16 and 17 to slide to fourth, but regaining third spot with a tight win over Wanderers. Early signs were shown as the Bombers outgunned St Mary’s in a Round 3 shootout, and their true credentials came to the fore between Rounds 7 and 10, where they went 3-1 against the then top four. It was smoother sailing from then, onwards, with Tiwi one of the more exciting teams to watch. Austin Wonaeamirri led the goalkicking with a season of 30, while a group of nine players littered with mainstays all notched up over 10 majors. Jason and Harley Puruntatameri were instrumental throughout the season alongside North Melbourne VFL signing Adam Tipungwuti, with cameos from Charlie Molyneux, Nathan Djerrkura, Jake Best, and Ashton Hams among the best throughout a top season – not to mention Cyril Rioli‘s Round 5 homecoming. With only the best sides left to face, Tiwi will have to find an extra gear to overcome the top two teams, and have the strength to do so.

Southern Districts were half a game away from creeping into third place after an indifferent 2019/20 campaign, with a Round 2 draw with Wanderers ultimately costing the Crocs a finals second chance. A rocky start was soon rectified by four-consecutive wins, with Districts able to demolish the teams below them for the most part, but eventually struggling against the rest of the top five. Spearhead Will Farrer ended a stellar season as the competition’s leading goalkicker, bagging a high of eight goals while being held goalless just twice in 16 games. Thomas Holman and Josiah Farrer will be among the leading best and fairest candidates, with the latter the only Croc to play all 18 games. Young guns Brodie Lake, Brandon Rusca, and Beau Schwarze all showed promising signs, with the ex-AFL experience of Ed Barlow, Michael Barlow, Richard Tambling, and Jeff Garlett aiding them. At full strength, the Crocs can match it with anyone, but finding peak form has been an issue for the 2018/19 grand finalists. Three comfortable wins coming in will bode well for Districts, but four-straight defeats before that run will not.

The unluckiest side out of Round 18’s results, Darwin will enter the finals series having fallen just one win short of a top three berth. The story of the Buffs’ early season was one of streaks, building short winning runs to go two steps forward, before dropping a step back with consecutive losses. Their second half of the season proved just as inconsistent, but the Double Blues still managed to maintain a positive record a remain one of the teams to beat – dropping 0 points to the eventual bottom three. Daniel Stafford was central to the Buffs’ scoring efforts, booting 39 goals in 12 games with just one goalless outing. Arguable best and fairest favourite Christopher Williams was the only Buffalo to play every game, with Darwin’s forward half its biggest strength. The likes of Darren Shillabeer, Brayden Culhane, and skipper Jarrod Stokes all enjoyed strong seasons, while Brodie Foster and Ishmael Palmer added value in patches. Should all those cogs click in the clutch, Darwin could inflict a couple of post-season upsets, but the Buffs will have to be flawless given their elimination slot.

Southern Districts and Darwin Buffaloes put it all on the line in their elimination final clash to open the post-season, while St Mary’s and Tiwi play off for the chance to face Nightcliff next week in a bumper first round of finals.

The Crocs and Buffs have clashed twice before in season 2019/20, each claiming a win by a combined eight points. Darwin’s victory in their most recent clash effectively proved the difference as Districts missed out on third, adding a little extra spice to this contest with no margin for error in their current situation. Watch for a potential shootout between mercurial forwards Farrer and Stafford, with the outside run and class of Districts potentially granting them more avenues for goal, while the seasoned veterans of Darwin will need to stand up across the ground.

In the featured final bout between St Mary’s and Tiwi, another chapter will be written in the league’s leading traditional rivalry. The two sides have met three times already this season, with the Bombers proving the thorn in St Mary’s side early on, but eventually dropping points in their Round 17 meeting. Tiwi’s firepower has tested the usually well-structured Saints defence before, but the inclusion of Jake Long went a long way to rectifying that last time out. Expect the Saints to back themselves to match Tiwi in that department should they be at full strength, but more likely look to slow the game down and control the tempo. Tiwi’s pace and outside run can match that of any team, but St Mary’s has become renowned for its spread of class on each line.