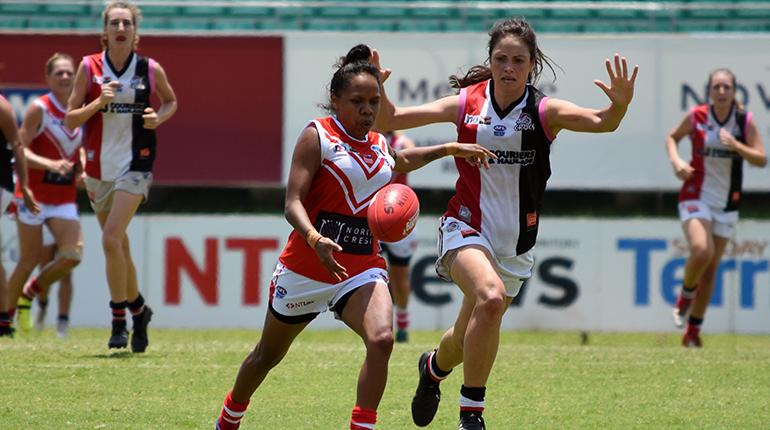 AFTER a long season in the Northern Territory Football League (NTFL) Women’s Premier League, just six teams remain in the competition, with back-to-back premiers Waratah favourites, though they face a team that has toppled them twice. Darwin and Nightcliff have beaten the top two teams at different points, while Palmerston have the depth to challenge any team and Pint will relish the underdog status.

Opening up a huge day at TIO Stadium from the Women’s Premier League perspective, third placed Palmerston Magpies go head-to-head with sixth placed Pint. The Queen Ants only just squeezed into the finals on percentage, having won one less game than the seventh placed Wanderers, but drew one and benefited from Big River Hawks’ being removed from the league to earn the rights to sixth spot. The lower ranked side comes win with some solid form, having won three of its last four games, albeit two of those wins came against teams not in the top six. The Queen Ants’ victory against Darwin Buffettes last week would give them confidence heading into this encounter, considering the last time these sides faced, it ended up a 39-point win to the Magpies. In their Round 1 encounter, Palmerston also got up, but by just two points on the same ground. The Magpies also enter the game on the back of some strong form, smashing fifth placed Nightcliff by 48 points, pummelling St Mary’s by 142, and then comfortably keeping Wanderers out of the finals race with a 36-point victory in Round 18. Heading into this do-or-die elimination final, Pint will hope to repeat the upset win over Darwin last week, which saw Kristen Smits and Jessie Baumer both boot two goals in the 6.7 (43) to 3.1 (19) triumph. With star player, Jasmyn Hewett now back in the AFL Women’s the Queen Ants have relied upon their next tier of players to stand up. Among those who could be ones to watch in the upcoming match are Erin Hetherington and Amy Pennefather, while Jacqueline Downey also hit the scoreboard last week, her ninth goal from 14 games. For the Magpies, they have a stacked team that can challenge anyone on their day, but also need a bit of luck to take down the top two sides. Billie Byers has been the star through the season, named in the best 11 times from 16 games, while Iesha Ronberg and Janet Baird are also impressive talents. Led by a host of teenagers in Arthurina Moreen (36 goals) and Freda Puruntatameri (24) – who will play for Calder Cannons in the NAB League Girls competition this season – they will look to use all the firepower they can to knock Pint out of contention and move themselves one win away from a Grand Final place.

Darwin will be kicking itself after its loss last week to Pint, robbing the Buffettes of third spot and a guaranteed chance at a Grand Final spot with a win in the elimination final. The Buffettes can still set up a likely clash with Waratah if they win, but need the Queen Ants to cause an upset in the other semi-final to ensure the state’s capital side is the highest ranked elimination final winner. It will not be an easy feat against Nightcliff however, with the Tigers only finishing a couple of wins behind, though granted their percentage was the worst of any side in the top six, and the only team under 100 per cent. These teams both come into this clash with less-than-ideal form, having lost their last two. The most recent win for Nightcliff – who had a bye in Round 18 last week – came against Darwin back in Round 15, when they booted 4.6 (30) to the Buffettes’ 4.3 (27). There was not much in the game, and it turned the tables on the two teams’ earlier result which saw the Buffettes run away with a 31-point victory after restricting the Tigers to just one goal in the match back in Round 5. Nightcliff has a couple of players who have been ultra-consistent throughout the season, with Eliza Morrison and Emma-Lou Wolsey both named among their side’s best on 11 occasions. VFL Women’s Grand Final captain, Western Bulldogs’ Mickayla Ward has also been a welcome addition to the NTFL Women’s Premier League, booting 11 goals from 10 games and named in the best on seven occasions. Laura De Hommel and Shantel Miskin-Ripia are other talents who have been consistent performers throughout the 2019/20 season. The Buffettes have an array of depth across their team, with youngster Dominique Carbone really taking her game to the next level this season, combining with fellow teenager, Tayla Hart-Aluni and the experienced Kylie Duggan across the ground. Hart-Aluni leads the side’s goalkicking with 17 majors from 16 games, while Delsey Ah Wang has a goal a game from 13 matches. Throw in the likes of Jemma Iacono and Bianca Stokes, and the Buffettes have such a strong side that they will be keen to take the next step and bounce back from back-to-back losses with a win in the elimination final.

Whilst the elimination final between the Buffettes and Tigers takes place on TIO Oval No 2, the all-important qualifying final clash between Waratah and Southern Districts follows on from the Palmerston-Pint elimination final match on TIO Stadium. These sides are no stranger to going deep in the finals series, playing off in last year’s decider. While it was the Crocs’ first grand final in the competition, the ‘Tahs have been the dominant side of the past decade. Since the 2012/13 season, Waratah has won six of a possible seven flags, often with comfortable margins in the Grand Final. They have dropped just the one decider – to Darwin in 2016/17, where they went down in a shock 18-point defeat. Now heading for a three peat and seven from a possible eight, the minor premiers will be hard to stop in this game. If there is a side to do it, then it is arguably the Crocs who have inflicted two defeats against the top side, though one of those was reversed back in Round 1 for having two extra players on the bench. They copped it back-to-back for the same offence in the opening two Rounds, so despite winning those games, two of the Crocs’ five losses have come from forfeits. The other three have come against Darwin twice – who appear to be the Crocs’ danger side – and Nightcliff by two points. For Waratah, the loss to Southern Districts in Round 11 will be fresh in the minor premiers’ mind, but so will the defeat to the Tigers a week later in what was a forgettable fortnight. Given that the Crocs completely outplayed them in Round 1 even with the extra couple of rotations, Waratah would be well aware of just how dangerous this game is. They come in off the back of an easy 100-point win over Tracy Village, but challenging contests against Darwin and Pint in the lead-up to that final round clash will have hardened the team for battle here. Both of these teams have plenty of stars running around, with Lisa Roberts arguably the standout player in the top side, having been named in the best 10 times from 17 games and booting 20 goals in that time. Rebecca Pryer is also a consistent player, while Claudia Fabris and Isabella Rapson-Staropoli have well supported them at the top-end. Lauren O’Shea (21 goals) leads the team’s goalkicking, while Jenna Singh (19) makes it three players with a combined 60 goals between them. The key for Waratah will be to stop goalkicking machine, Ebony Miller who has simply been unstoppable this season for the Crocs, booting 59 goals from 14 games. The next highest goal kicker for Southern Districts is Kelsey Patterson with 10, meaning if Miller can be stopped, so too can the Crocs. With three bags of 10 – granted against the bottom three sides – Evans certainly padded her total, but still managed to kick multiple goals in every game bar two this season. From the team perspective, Tahlia Holtze and April Lewis are aiming the consistently strong players, as are young guns, Bella Clarke and Lateesha Jeffrey and Mattea Breed, with Clarke and Breed now running out in the SANFL Women’s competition which has begun. Waratah will start favourites, but Southern Districts have the recipe to win, which makes this a tantalising contest.