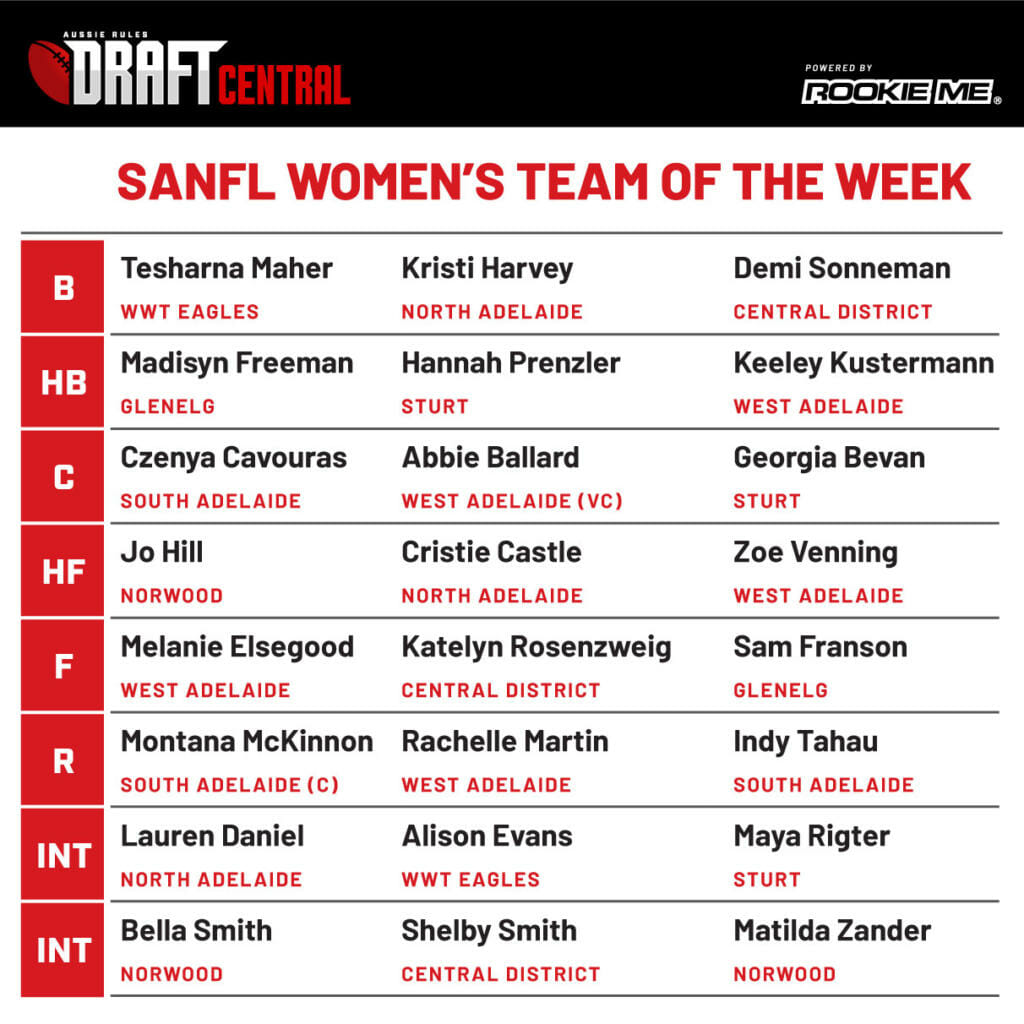 IN a new addition to our South Australian National Football League (SANFL) Women’s coverage for 2020, we have crunched the numbers and gazed across the four games to come up with a hypothetical Team of the Week. Our Draft Central SANFL Women’s Team of the Week features a 24-player team with 18 on the field and six on the bench, allowing for exceptional performances. For Round 1, West Adelaide has a remarkable five players in our Team of the Week, with an even spread across the league with five other teams recording three players, and Glenelg and Woodville-West Torrens having two apiece.

The Bloods cover five of the starting places no less, split across the three thirds of the ground, with one defender, two midfielders and two forwards after a consistent team performance. Abbie Ballard racked up a round-high 27 disposals and nine clearances, as well as five marks (one contested), four tackles and three inside 50s to be our vice-captain for the week. Joining her in the midfield is Rachelle Martin who returned from AFL Women’s to have 15 disposals, 11 tackles and five clearances, while Keeley Kustermann slots in at half-back after a solid showing in defence. Up forward, Zoe Venning had 17 disposals and worked hard up the ground for three clearances, two inside 50s and five tackles, while Melanie Elsegood played deep and booted two goals from five scoring shots.

The captain in our Team of the Week is South Adelaide’s Montana McKinnon who was unlucky to miss out on a spot in Adelaide’s AFL Women’s side, but with the performance she put out, it will not be long before she forces her way in. The 18-year-old racked up a remarkable 18 disposals, 7 marks (five contested), two tackles, 20 hitouts, four clearances, six inside 50s and two rebounds in the Panthers’ narrow win over the Eagles. She will be amongst familiar faces with midfielder, Czenya Cavouras on the wing after racking up an equal round second-highest 20 disposals, as well as 11 tackles, six clearances, two inside 50s and two rebounds, while teenager Indy Tahau earned an onball spot thanks to 17 disposals, four tackles, three hitouts, eight clearances, three inside 50s and two rebounds.

The last starting midfielder in the side is Sturt’s co-captain Georgia Bevan, who is joined in the side by co-captain Maya Rigter, and centre half-back, Hannah Prenzler. Bevan had 19 disposals, two marks, six tackles, three clearances and three rebounds in the Double Blues’ loss to West Adelaide, while Rigter was her partner-in-crime through the midfield with 18 disposals, seven marks, six tackles and two clearances. Prenzler stood tall under fierce pressure with 12 disposals, seven marks, three tackles and two rebounds. Filling out the other key defensive position is Kristi Harvey who returned to North Adelaide from Carlton’s VFL side this season. She was steadfast in her strength and approach, having five rebounds to go with nine disposals and two marks. Other Roosters who made the side were Cristie Castle – who booted two goals from 17 disposals, six marks (three contested), five clearances and four inside 50s – and Lauren Daniel who made her way onto the bench after 14 disposals, five marks, two tackles, two clearances and two rebounds.

In a game of multiple impressive individual performances, both Central District and Norwood registered three players apiece. The Bulldogs had defender, Demi Sonneman record 13 disposals and six rebounds up one end, while Katelyn Rosenzweig booted four goals from seven disposals and three marks (one contested) up the other to be the leading goalkicker for the round. Shelby Smith racked up 20 touches and had three marks (one contested), two inside 50s and three rebounds to be the third Bulldog to make the side. For the Redlegs, forward Jo Hill made the starting squad after 11 disposals, two marks, five hitouts, three clearances and two goals, while Bella Smith and Matilda Zander both squeeze onto the bench. Smith had 10 disposals, five marks (two contested), two tackles, six hitouts and five inside 50s, while Zander had 20 touches, six marks, four tackles, two clearances and two rebounds and was unlucky to miss a starting spot but the midfield was stacked.

The two sides with just the two representatives are Woodville-West Torrens and Glenelg. The Eagles’ Tesharna Maher made the squad in the back pocket after 10 disposals, three tackles and an impressive six rebounds, while Alison Evans was her sides’ highest ball winner and will come off the bench following 15 touches, three marks, eight tackles, two inside 50s and three rebounds. For the Tigers, Madisyn Freeman‘s run-and-carry from her 14 disposals, two marks, two tackles, four clearances and two rebounds saw her make the side off half-back, while up forward, Sam Franson had 16 disposals, two marks (one contested), six tackles and two inside 50s.

In terms of unlucky players, the first emergency would be Norwood’s Leah Cutting with the ruck the most unluckiest not to be picked. She had a second highest total of hitouts with 19, as well as five marks and six tackles, but with the squad balance there were a number of part-time rucks who would assist McKinnon in that area. Along with Cutting, West Adelaide’s Kasia Culhane booted two goals from 12 touches, four tackles, two clearances and two inside 50s, while South Adelaide’s Teah Charlton was also solid with 14 disposals, five tackles, four clearances and three inside 50s. Others considered for the team this week were Norwood’s Mattea Breed, Shai Hiscock and Lindsay Bigg, North Adelaide’s Leah Tynan and Kelly Barltrop, Central District’s Kimberley Fry, Abbey Scheer and Latiah Huynh, West Adelaide’s Emma Smith, Woodville-West Torrens’ Jaimi Tabb and Glenelg’s Soriah Moon.

DC SANFL WOMEN’S TEAM OF THE WEEK: ROUND 1