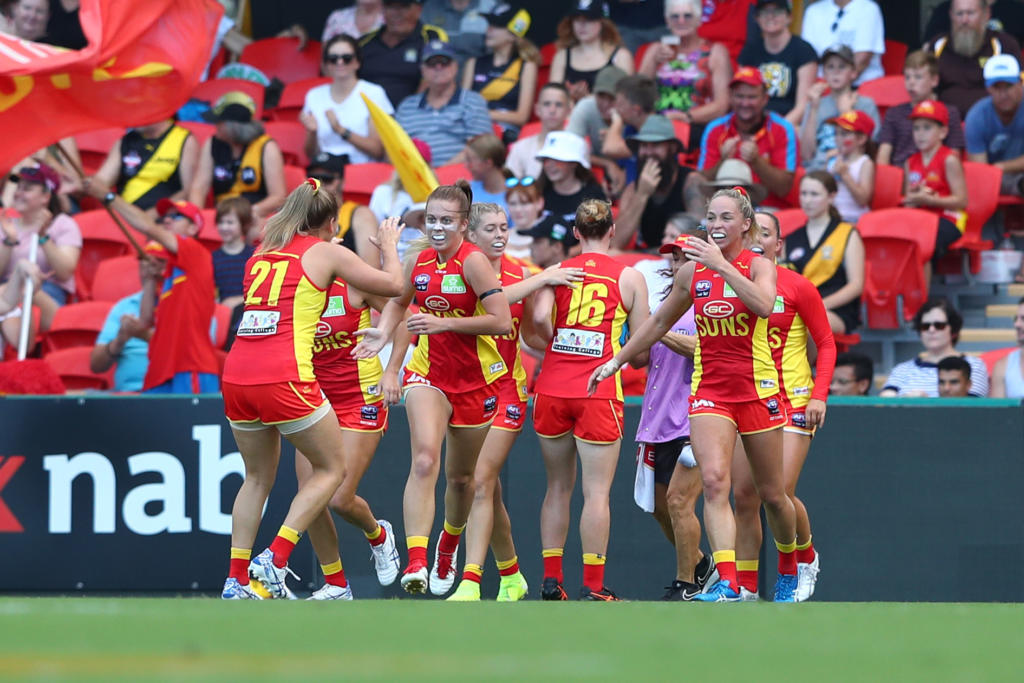 GOLD COAST made history in what was a game of firsts, trumping Richmond by 11 points at Metricon Stadium under hot and humid conditions. The SUNS claimed their maiden AFL Women’s win in their first home game, and in the first fixture between two 2020 expansion teams, making better of their opportunities to run out 5.3 (33) to 2.10 (22) victors.

Played at a chaotic pace in the first half, the contest was tighter than the scoreboard suggested for much of the day, but the SUNS’ pressure around the ball ensured the Tigers would struggle to find clear avenues to goal. While the Tigers were forced to kick down the line and lacked any real inspiration, the SUNS were able to break quickly and advance up the ground with fluent kicking. The SUNS’ tackling was also a key feature, notching a total of 74 in the face of Richmond’s greater disposal count.

The hosts came out the hungrier of the two sides, quickly breaching the forward 50 arc and initiating a frenetic pace. After Jaime Stanton dribbled through the opening goal having snuck out the back, Christina Bernardi provided a similar-styled reply for the Tigers with help from a Gold Coast communication breakdown. Tayla Stahl also got on the board as Richmond began to shift the momentum, with some poor inside 50 entries the only thing preventing a wider margin. And the Suns ensured it would be costly right on the quarter time siren, as Kate Surman was awarded a 50-metre penalty to squeeze home her first goal and level the scores. The Tigers would have felt that the 2.2 apiece scoreline was a disservice to their control of the contest, but the Suns’ ability to keep nagging away would soon become a theme.

With the Richmond midfield – led by Monique Conti – starting to click, the home side needed to again arrest the momentum in quick time. The answer to that was hitting Richmond hard on the spread with outside possession, and Gold Coast’s first-ever goal kicker, Brittany Perry ensured her side would sneak ahead with a terrific one-on-one effort close to goal. Surman, who was seen letting out a quarter time spew, extended the lead after getting on the end of a well-weighted Jade Pregelj kick as the SUNS’ prime movers began to get busy. The passing showers also favoured the red-hot SUNS given last week’s conditions, with their maintained intensity and superior use forward of centre helping them to an 11-point half time lead. But a slight injury concern would somewhat dampen their sense of ascendancy, with Stanton crunched and helped off just before the break.

That soon became a non-factor as Stanton again lined up on Katie Brennan to start the second half, with the Richmond skipper beginning to have a greater say. Still, her Tigers were poor going inside 50 and their forwards were unable to contest or clunk much of what was coming their way, with the organised SUNS defence sweeping up swiftly. Sensing another momentum shift, Gold Coast kept its foot on the gas despite tiring legs becoming evident, with scoring increasingly hard to come by. That was not the case for former-Lion Jacqui Yorston though as she sent home a terrific finish on the end of one of the game’s most slick transitions to give her side a game-breaking buffer. Maddy Brancatisano’s set shot minor score on the three quarter time siren did little to give the Tigers a proper sniff heading into the last change, but the Tigers would not give up that easily.

Needing to roll the dice, Richmond began to diversify its disposal, kicking laterally and generating more run through the corridor. Some great coast-to-coast play from the Tigers gave Bernardi the opportunity to put them within striking distance, but her miss seemed to put the jitters into her side as it looked to mount a comeback. Four more behinds followed from gettable chances as the Tigers kicked themselves out of the game, with Gold Coast’s output slowing as it looked to coast home to a result. The SUNS did in the end, absorbing the late pressure to snare a deserved first win in the AFL Women’s competition.

The first half forward combination of Surman and Perry worked wonders for the SUNS as they began to break the game open, with the pair pitching in over half of their side’s score in the opening two quarters alone. Leah Kaslar was also amongst it with 15 disposals and two behinds, but Stanton proved to be the difference – juggling her own 20 disposal and one goal performance with a tagging role on Brennan. The likes of Lauren Ahrens (16 disposals, five tackles), Jordann Hickey (15 disposals, five tackles) and Hannah Dunn (14 disposals, eight tackles) also returned important shifts for the winners, working hard going both ways.

For the 0-2 Tigers, it was the big names who again stood up; with Phoebe Monahan (21 disposals, four marks) holding up the defence, Conti (17 disposals) electric at the stoppages, and Bernardi (15 disposals, 1.3) on the verge of a special game up forward. Skipper, Brennan also worked into the game well after half time, while Stahl caught the eye on the back of 12 disposals and a goal. Young defender Sarah Sansonetti (20 disposals) and Akec Makur Chuot (13 disposals) proved they could form a stingy defensive pairing in time, and debutant Grace Campbell was a livewire through midfield with her 15 disposals – albeit showing signs of her very raw game.

With four premiership points under their belt, the SUNS move on to face Brisbane at home in the inaugural AFLW Q-clash, while Richmond’s search for a maiden win heads back to Ikon Park as the Tigers take on North Melbourne on Sunday afternoon.