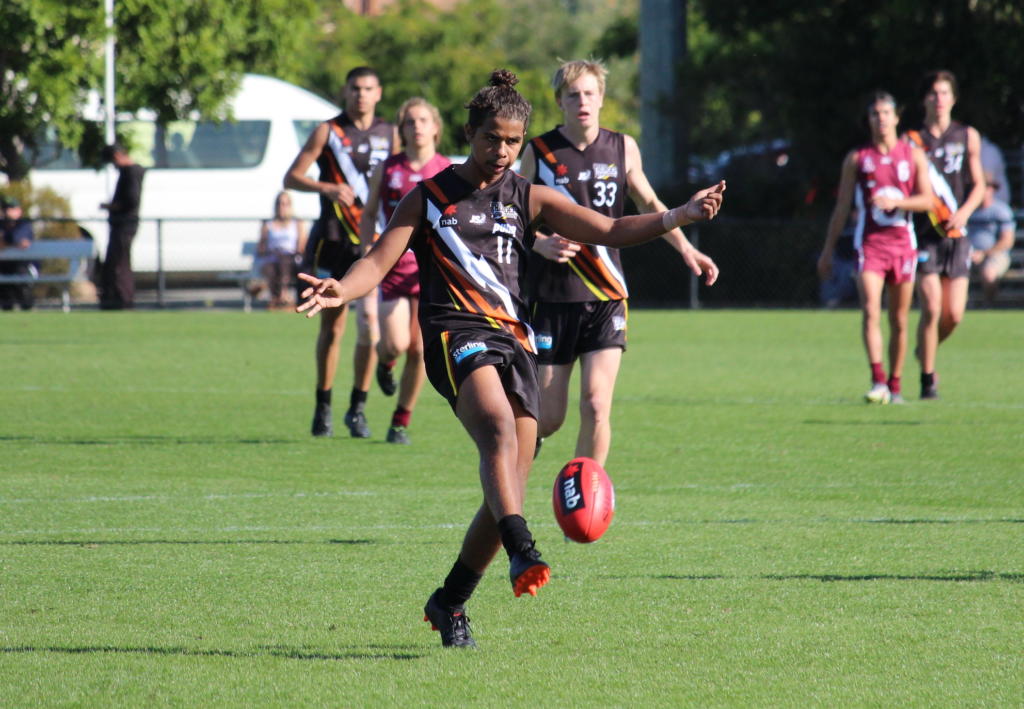 THE final Northern Territory Football League (NTFL) Men’s Premier League round goes down on what is set to be a super Saturday of footy, with all four fixtures taking place on the one day at four separate venues. Three sides are vying for the all-important third place to secure a second chance in finals, while the top two and bottom three are all locked in with one set of games to play.

Tiwi will consider itself as being in the box seat to snatch back third spot, as it opens the closing regular season round against Wanderers at TIO Stadium. While consecutive losses – albeit to the top two sides – have seen Tiwi slip down to fourth, the Bombers have shown form to suggest they can challenge the very best come crunch time. But in somewhat of a bittersweet story for their season, the Bombers will be without recent North Melbourne VFL signing Adam Tipungwuti as he undergoes his first Victorian pre-season. Tiwi will still come in with a strong lineup heading into finals, with Tipungwuti’s run left for Harley Puruntatameri to generate, while Nathan Djerrkura will make up his class on the ball. Wanderers, looking to end its season on a high amid 11 consecutive losses, also comes in boasting an exciting extended squad, with a heap of young talent set to take the stage once again. Joel Jeffrey has been the standout as the Eagles’ leading goalkicker, set to team up with Liam Patrick inside forward 50. The in-form Beau O’Connell teams up again with Braedon McLean through midfield, with the x-factor of Mark White also in on the extended bench. With plenty of pace lining up across the field, expect a heap of highlights from two clubs which have been notorious for them over the course of this season. It may seem a foregone conclusion with Tiwi hunting a superior finals position and percentage boost, but expect the Eagles to be competitive.

Southern Districts’ slim chances of snatching third spot boil down to at least getting a result against Waratah in their clash on Crocs’ territory, with the Warriors looking to play spoiler. While Districts struggled to navigate a month of top five match-ups, their run home against the bottom three sides has seen them enter winning form heading into finals, with this another opportunity to extend that run. The Crocs are set to field a relatively strong team too, highlighted by the inclusion of former Brisbane and Gold Coast utility Jared Brennan, while the midfield-forward rotation is also typical strong; featuring Richard Tambling, Ed Barlow, Josiah Farrer, and Jeff Garlett. That is not to mention competition leading goalkicker Will Farrer, who comes in off an eight-goal haul against Palmerston. In response, Waratah is set to field a decent side with leader Abe Ankers named at the heart of midfield, while the trio of Kim Kantilla, Jae McGrath, and Michael Newton headline an exciting front six. They will need to produce plenty of opportunities to overshadow the Crocs’ firepower, with the fifth-ranked side cracking the fabled ton in its last two outings. But Districts should take nothing for granted against the Warriors, who have already proven their ability to be competitive at their best despite enduring a lacklustre season.

St Mary’s has the opportunity to foil Darwin’s attempt to hold onto third spot when the two sides do battle at Gardens Oval in the Saturday twilight. The Saints have won in eight of their last nine outings to stand as one of the clear top two sides in the competition, and will have a say in deciding which team they will face in the first week of finals. On the other hand, the Buffs have made the most of their opportunities amid a tricky last six weeks, beating the teams they were expected to while also picking up a crucial four points against Southern Districts to sit as the best of the rest heading into finals. Buffs playing-coach Matt Campbell – named on an extended bench – will have a ridiculously strong spine to make use of; with Ryan Pendlebury and Stephen Tahana lining up down back, Daniel Stafford and Darren Shillabeer up forward, while skipper Jarrod Stokes returns to the fold alongside the possible inclusion of Adam Sambono. Cameron Stokes will also beef up an already solid back six, escaping suspension amid an appeal. They will need all the class they can get too, with St Mary’s posting a star-studded team sheet in response. The spine of the team is just as strong, with Tom Davies and Jake Long combining down back, Jarrad Waite and Jackson Calder positioned up forward, while Nate Paredes, Jackson Paine, and Shaun Edwards patrol the engine room with David Armitage also named on the bench. The strength on each line across both sides is clear, and it makes for what promises to be one of the highest-quality NTFL games this season. The Saints will take some beating, but the Buffs have plenty to play for.

First and last place take the field for the final NTFL 2019/20 regular season fixture, as Nightcliff travels to take on Palmerston at Cazalys Arena. The records of either side are, in satisfying fashion, perfectly opposite heading into the ultimate round, with Nightcliff’s comprehensive premiership defence to date juxtaposed by Palmerston’s second wooden spoon in three years. The Tigers have steamrolled their way to 16-1 on the back of 10-consecutive wins, overcoming every side in the competition to set a ridiculously high benchmark. On the flip-side, Palmerston’s peak Round 13 breakthrough victory has been clouded out by another string of losses to end the season – which looks likely to continue here. Most of the Nightcliff stars will get one last run-out before finals, with Trent Melville, Kyle Winter-Irving, and Daniel Bowles all named to make their 18th appearance of the season, while possible best and fairest leader Kaine Riley also features and excitement machine Liam Holt-Fitz will have the opportunity to add to his 29-goal campaign. For the Magpies, Aaron Lonergan will lead out the likes of Sandy Brock, Kyle Emery, and Wade Shadforth alongside playing-coach Alwyn Davey. But in a blow, Palmerston may fall short in the ruck department this week, as bigmen Matthew Dennis, Jack Berry, and Keidan Holt-Tubbs all remain absent. It only makes the going tougher for this year’s cellar dweller, so expect it to be over quickly despite Palmerston’s tendency to show glimpses of form.