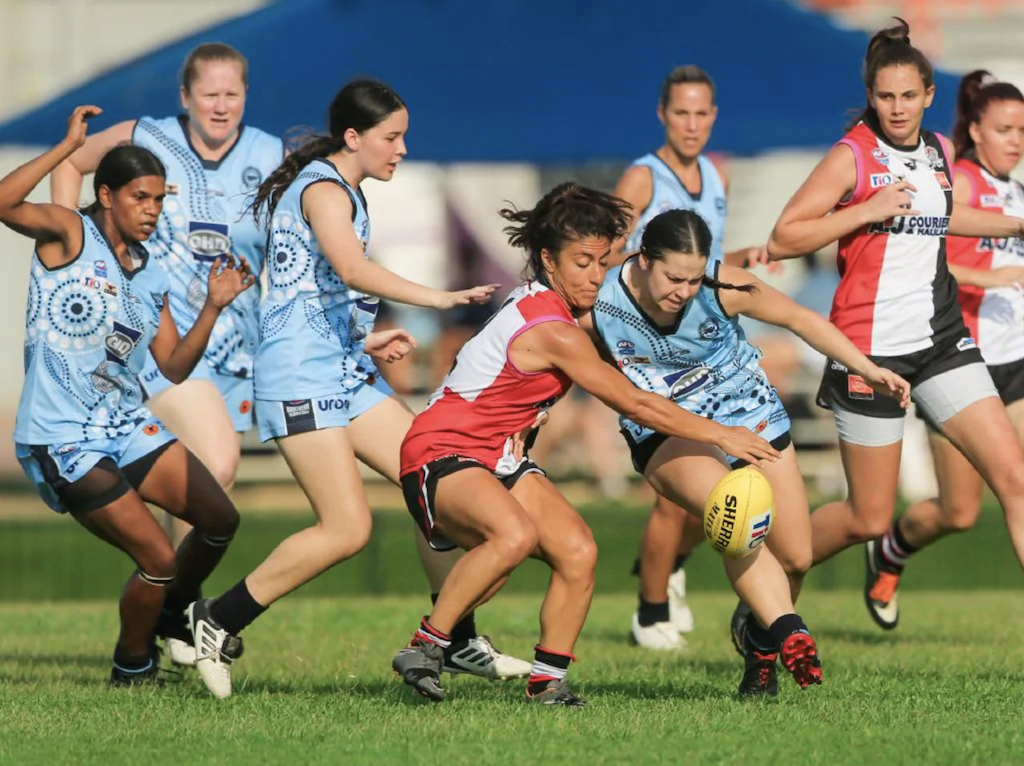 THE ultimate round of the Northern Territory Football League (NTFL) Women’s Premier League features a quartet of games all set to take place on a super Saturday, with the final six teams decided and those positioned from second to fourth vying for supremacy. The only game between two finals-bound sides will be left for last, as Palmerston takes on Wanderers at Cazalys Arena.

Minor premiers Waratah will look to end a successful regular season on a high when it does battle with Tracy Village on the road to open Round 18. The Warriors have been in solid form heading into the post-season, coming off a top-of-the-table clash triumph to clock up their fifth consecutive win as the clear competition benchmark. On the other hand, Tracy Village has gone down in its last five outings, sitting last in the list of sides remaining in the competition at 2-15. The Razorbacks and Warriors have only previously met once this season, but the result was comprehensive as Waratah came out 93-point winners back in Round 9 to highlight the gap between the two sides. The perfectly juxtaposed records almost also go down to the scoring differential too, with Waratah leading the league in both points for and against, while Tracy Village is at the opposite end of both spectrums. Lauren O’Shea, Jenna Singh, and Lisa Roberts have all combined well to lead the Warriors forward of centre, while the consistency of Rebecca Pryer and Claudia Fabris has been commendable over 14 games each. The contributors are fewer and further between for the Razorbacks, boasting just three goalkickers but the likes of Gabrielle Young, Bonnie McDougall, and Zhoe Clarke may be leant on in this clash. It seems a mismatch on paper and has already proven so this season, which may not favour Waratah heading into finals.

Southern Districts will look to better its standing among the top four as it faces the lowly St Mary’s on home turf, able to finish anywhere between second and fourth. The Crocs have won seven of their last eight games, picking up from where they left off after a Round 16 bye to thump Nightcliff last time out. As is somewhat of a theme for the round, St Mary’s have shown nearly completely opposing form with five losses in its last six outings – with the only win coming against Tracy Village and last week’s loss playing out to the tune of a 142-point thrashing against Palmerston. A Round 9 meeting between these two teams was as one-sided as their records would suggest as the Crocs took home a 66-point win, with St Mary’s lack of scoring prowess continually becoming a factor. While they have notched up six wins, the Saints have been much less competitive against the top-end sides, and that kind of gap in performance could prove costly again. With no Saint playing every game and the turnover of players as high as anyone, Southern Districts’ luxury of being able to rely on competition leading goalkicker Ebony Miller (49 goals) and Tahlia Holtze makes the Crocs a solid contender. While this looms as another one-sided match-up, expect both sides to throw everything at it in their final regular season hit-out.

Fresh off a loss in their top of the table encounter with Waratah, Darwin will hope to return to the winners list when it faces the best of the rest, Pint at the MCG. The Buffettes’ indifferent form of late has seen them slide from second to fourth, losing three of their last six games and only winning five of their past nine since a draw with Pint in Round 9. That 28 points apiece thriller was the only time these two sides have met this season, and bodes for a good contest considering Pint will come in refreshed after a bye round with nothing to lose. The Queen Ants have battled hard amid a tough set of fixtures over the last six weeks, but see themselves narrowly missing out on a finals berth despite the possibility of finishing with an even record. Pint’s defence will need to stand up if it is any chance of getting a result in this game, with Darwin boasting the third-best scoring record, while the Queen Ants’ defensive record is good enough for sixth. But with a clear gap between the top four and the rest of the competition, those numbers are compounded even further. A good spread of contributors from Darwin will again need to stand up, with Jemma Iacono and Tayla Hart-Aluni playing all-but one game, and the latter booting 17 goals. Dominique Carbone and Kylie Duggan have also been important over the long haul, while Pint’s Emma Green and Casey Morris will be key to the resistance. Previously the best-positioned side from second to fourth, Darwin will have to earn its way back there and perhaps have the ideal run-in to finals in what promises to be a competitive match.

Wanderers’ tricky run into finals comes to an end against Palmerston in what looms as the game of the round, set to do battle with Palmerston in the weekend’s only top six clash. The Eagles’ fate is set as they ready for an elimination final bout against Nightcliff regardless of this result, but the bragging rights of going into that clash as the better-ranked side is up for grabs here as the Tigers have the bye. 2-3 in its last five outings, Wanderers have had a tough time of it of late, but have showed the potential to pull of results above their ranking. Although, that was hardly the case in the previous meeting between these two sides this season, as the second-placed Palmerston ran out 29-point winners. The Magpies surged into second spot on the back of a 142-point win over St Mary’s to notch up a fifth win in six games, with the security of the top two meaning they have everything to play for as Southern Districts and Darwin chomp at their heels. The scoring prowess of Palmerston is no joke, with the combination of Arthurina Moreen (35 goals) and Freda Puruntatameri (24) proving lethal, with the likes of Billie Byers and Natasha Medbury also important. For Wanderers, which boasts a somewhat leaky defence, Shekeine De Satge and Tishara Davern have been terrific up the other end, and will need to find the big sticks if the Eagles are to stand any chance of a result. Both sides should benefit from a competitive match here, with a must-win situation beckoning for Palmerston.