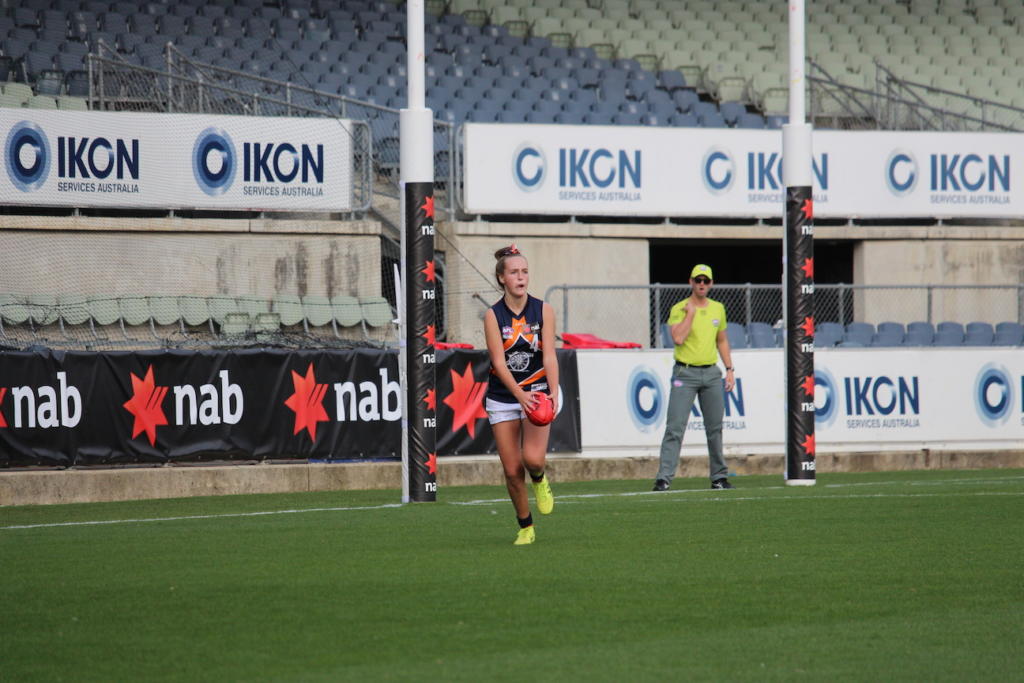 CALDER Cannons’ NAB League Girls list was finalised last last week as the Craigieburn-based side prepares to head into the 2020 season. Reaching the 2019 Grand Final before ultimately falling a win short at the hands of the Northern Knights, Female Talent Coordinator Russell Humphrey said there was roughly around a 10-player split across top, middle and bottom-age players. With a different coaching group coming on board, Humphrey said he is feeling more comfortable ahead of his second season in the role.

“It helps going around again,” Humphrey said. “I had a little bit of a handle on it beforehand but being in the coordinator’s chair you’ve got to have a bigger handle on it and I’ve gone out last year and watched a fair amount of local footy which I’ll do again this year just to see what’s out there. “With our list (compared to the boys) it’s a little bit harder because our season starts before the local season starts so it only gives them three or four weeks before our season finishes so it’s a little bit difficult that way. “We rely a little bit on going out and watching them during the year and things like that.”

Last year the Cannons had two players drafted, with captain Georgia Patrikios going in the top five to St Kilda – and already earning a Rising Star nomination – and Krstel Petrevski picked up by Melbourne later in the draft. Humphrey said Patrikios’ influence on the club as captain had been profound.

“It was interesting for Georgia, at the start of the year she hurt her ankle so it made her work a little bit harder to go through the injury issue, getting right and then to start playing,” he said. “I think that because of that, it gives her a good understanding of what’s required going into AFLW. I know that when she played state footy she played very well for Vic Metro and then when she played for Essendon VFLW she played well there as well so she gave the girls an understanding of what’s required and I think a lot of the top-agers followed that. “Krystal got drafted, Alana Barba, Felicity Theodore and Terira Fry and Zoe Hardiman all ended up playing VFLW footy, and Makeisha Muller as well. “At Williamstown, North (Melbourne), and Essendon. So I think that group was dragged along by themselves and the results showed with them all playing VFL footy. “Getting two drafted was fantastic, if we got three it would’ve topped it off.”

While Patrikios has already made an impact in her first game, Humphrey said Melbourne fans had plenty to look forward to with Petrevski when she gets her chance to don the red and blue.

“Competitive, competitive, very competitive young lady,” he said. “Does the right things, everyone knows the story about her moving from Halls Creek, down to Sydney and then across here to Melbourne, that in itself shows resilience. “And I think that’s what they’ll get, they’ll get a hard-working person that understands what’s required.”

The future looks bright for the Cannons, who regularly have past players – such as Patrikios and Petrevski – dropping in at training to keep them informed of what’s happening in the world of AFL Women’s. Former Cannon, Sarah Dargan is an assistant coach at the club, which has plenty of future talent on the list at Under-17 and Under-16 level coming through.

“We were lucky last year, we got an exceptional group of Under-16 players who are now Under 17s,” Humphrey said. “And like it does in the boys, it goes in circles like that and we were just lucky to get that group of probably 10 quality Under-16 players. “We’re hoping that the development of our top-age players this year sort of drags them along as well, the 17s came back in better shape than maybe previous years and I think that’s experience for them, learning what’s going on a bit more. “Around the whole competition the 16s and the 17s are now getting a better idea of what’s required when they come back from their 16th year to their 17th, and 17th again to 18th.” We don’t want to rely on our 17s but they will be part of the going forward.”

For such a young group to make the grand final was huge, but Humphrey said the Knights were too good on the day, and did not enable the Cannons to play with the same freedom they had against an equally strong Falcons side.

“It was for our playing group, reward,” Humphrey said. “For the coaching group it was reward. “I know the work that they had put in to get to the final, to beat Geelong who are a quality side and had quality people around them, to be able to get past them was probably more important for the girls than the grand final. “That’s no disrespect to Northern because they played great footy on that day but that high of beating Geelong, it was hard for our girls to get back up and play Northern, and Northern didn’t allow us to play the footy that obviously we played the week before. “It was an exciting time for (the players), making the finals and then winning the game against Geelong and leading into grand final week we were positive but unfortunately we just couldn’t get the chocolates at the end of the day, but Northern were a quality side and so were Geelong. I think the competition’s getting closer and closer every year which is fantastic.”

The name that has been and will regularly be touted is Georgie Prespakis, the younger sister of Carlton’s Rising Star Madison, who is still a year away from being draft eligible. In one game against the Rebels last year, the Under-16 talent booted seven goals after moving to full-forward in the second quarter. Humphrey said while the hype was genuine, the Cannons had plenty of players to watch from that age group that were worthy of the same praise.

“I think we all get excited with Georgie and I understand that,” Humphrey said. “We don’t have any expectations on her, we just expect them to play.” The hardest part for Georgie is being a bottom-ager and how well Maddy (Prespakis) is going, the scrutiny on her is a fair bit from this sort of forum (media). “I think we’re missing out on Tahlia Gillard who’s in the Academy, Neve Crowley, (Emilia) Yassir, Kasey Lennox, Peppa Poultney that played in the Vic Metro 16s – we’ve got a group of six to eight players in that group who are possibly draftable, again they have to do the work and we have to do our end. But everyone’s all about talking about Georgie a lot and I understand that but I think they’re missing some quality players there. “Tahlia Gillard is 186cm tall and her birthday’s at the end of the year so she doesn’t turn 17 until December.”

Those names are still a year away from being draft-eligible, and to focus on this year’s crop, Humphrey said there were certainly some to keep an eye on.

“I think you’ll find that Laura (Cocomello) will play in the midfield, probably mid-forward. “Kiara (Delia) will probably play down back and through the middle as well. “Tamsyn Crook we’re going to probably start her off down back and let her play one position instead of throwing her around – similar to what the boys will do with Cody (Brand) – and just let her give her a spot down back and let her hold down centre half-back for a while. That’s not to say she won’t go forward or won’t go in the middle but we’ll probably look at her beginning down back.”

The Cannons have managed to have a top five pick in the first three years of the system, with Chloe Molloy, Monique Conti, Prespakis and Patrikios all going early in the AFL Women’s drafts. In 2020, the Cannons have a more even top-age spread without a clear standout.

“I think that’s a great call, (in) our top-agers we don’t have the standout,” Humphrey said. “We have a top-age group that’ve worked pretty hard and there’s no outstanding sort of touted draft prospect. “But I think again if we do the job properly with the coaching and everything else, we’re hoping again to get one or two (drafted). “Our aim is obviously to get minimum one a year so if we can do that, that’ll be great. It’s an even group, most definitely. “And we’ve brought a couple of girls in who’ve never played NAB League footy or TAC Cup footy before, top-agers so that’ll be interesting to see how that goes. “But again if they’ve got the talent, you need to have a look at them and give them the opportunity so that’s what we’ll do.”

The Cannons will bring in a couple of 19-year-old’s with Grace Dicker coming back after a year off to recover from a shoulder injury sustained in 2018, as well as Freda Puruntatameri who spent some time at Essendon VFL last season having travelled down from the Tiwi Islands. With Matthew O’Connor now taking the reins of the girls’ side, the team has a different leader, but a similar game style to the previous year. In preparation for the year ahead, the Cannons will head up to Yarrawonga to face Murray Bushrangers, before another match against Western Jets the following Friday in a lead-up to their Round 1 clash.

Calder takes on Northern in a grand final rematch, played on Saturday, February 29 at RMIT Bundoora.