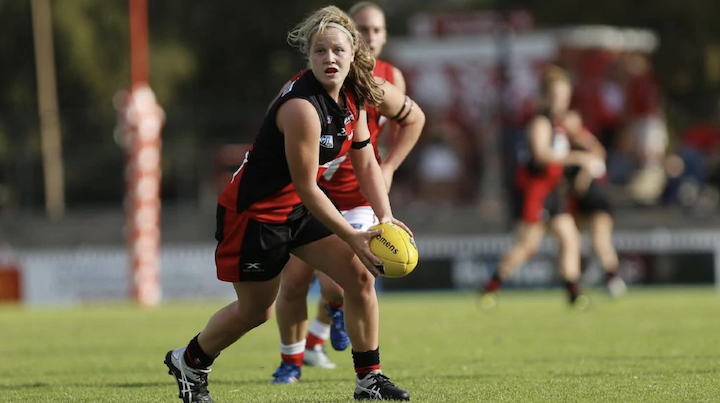 IN the next of our South Australian National Football League (SANFL) Women’s team preview, we take a look at West Adelaide, a side that came agonisingly close to a finals appearance, but was pipped at the post by an Ebony Marinoff-inspired Glenelg.

Similar to our South Adelaide preview, we have included both Newman and Biddell as ones to watch purely because though they departed the club for AFL Women’s, they did land at Adelaide which gives them a chance to still run out with the Bloods in the upcoming season. Newman finished top five in disposals last year and was a revelation in the back half, while Biddell was the club’s leading goalkicker. While it is hoped they can both make an impact at AFL Women’s level – especially given the Crows’ recent run with injuries – the club would love to have them back, even if it is only a few games towards the back-end of the season.

The teenager is entering her draft year and the now top-ager will look to take over from Newman as the key talent through the midfield group with the more experienced, Rachelle Martin. Ballard showed a fierce tenacity to attack the contest and despite her size – 159cm – she won double-figure disposals on all bar one occasion to average 16.1 per game to go with her 4.1 clearances, 5.4 tackles and 2.1 inside 50s. Her final game of the season in the loss to South Adelaide saw Ballard rack up 24 touches, three marks, five tackles, six clearances and five rebounds in a superb effort leaving fans excited for what could come in 2020.

One of the bigger inclusions across the SANFL Women’s competition for 2020, the 174cm midfielder is still only 25-years-old but has premiership experience at the highest level, playing in the inaugural AFL Women’s premiership side with Adelaide. Last season she played three games with NT Thunder, where she averaged more than 10 touches per game. She should slot straight into the midfield and be that extra hand around the stoppages, not afraid to lay a tackle and then go forward and find the goals. A handy player to have running around for the Bloods.

After an unbelievable 2018 SANFL Women’s season where she was one of the most dominant ball winners in the competition, Martin was restricted to just four games due to injury in 2020. She made them count, averaging 19.8 disposals, 6.8 tackles, three clearances, three marks and 2.3 inside 50s. She also managed to boot a goal in two of her games, and did play the last three of the season, Unfortunately it took her a few weeks to get back to her best and by then the season was over. Could stake a claim as one of the best ball-winning state players and is almost a new inclusion into last year’s side. If she stays fit will be an unbelievable talent in that on-ball brigade.

Finished second overall in the club goalkicking last season, slotting 10 goals in nine games for the Westies. With Biddell potentially no longer inside 50, Elsegood has free reign to be the dominant target for her club, and she has to stand up and deliver this year. Not a huge ball winner, Elsegood is someone reliable to hit the scoreboard, doing so in seven of her nine games, including a bag of three to open the season, and two goals to finish it. One who could benefit from the permanent inclusions of Martin and Killian.

West Adelaide could be one of the more unknown quantities in the competition. The Bloods came close to finals last year, and while they have lost a number of key players, have brought in quite a few talents at the same time. If they play to their potential, the Westies could sneak into the top four and play finals. They face a tough draw however, with double-ups against reigning premiers South Adelaide – both in the last four weeks – and Norwood, as well as Sturt. Realistically need to win quite a few early to make finals a possibility, but have faith because in patches they looked impressive last season.