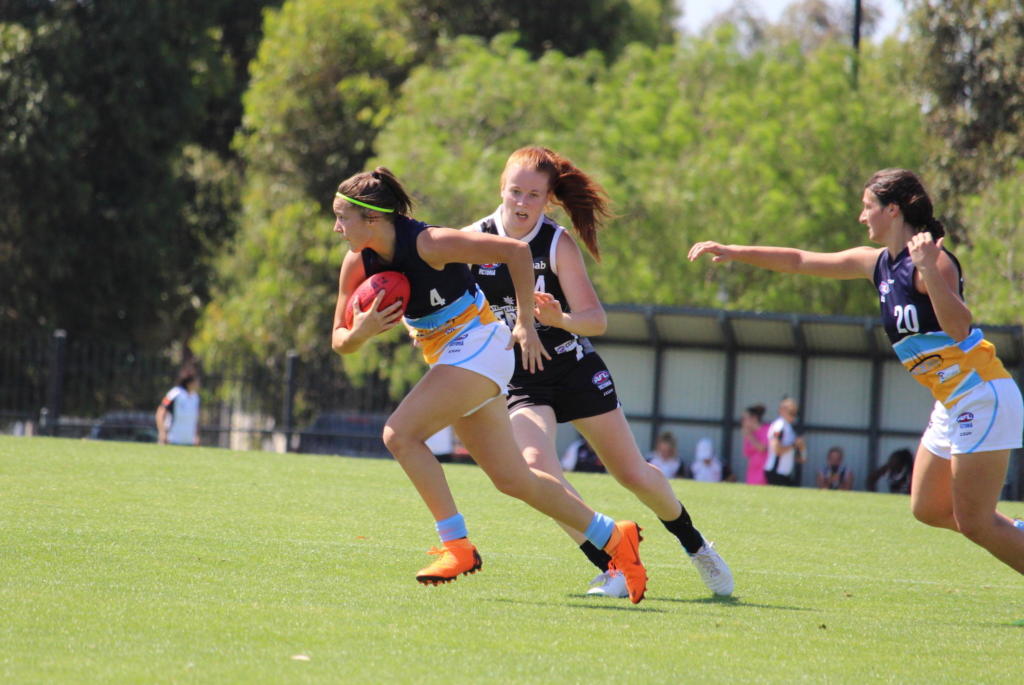 BELIEF is a powerful motivator in any walk of life, and the Bendigo Pioneers’ NAB League Girls program is one that has building on and off the field over the last few seasons. In 2019, the Pioneers Girls’ program showed how they had grown from the previous year, winning four games – three more than the previous year – and being more competitive throughout each game. Pioneers’ Talent Manager Stephen Sharp said the girls’ confidence had increased throughout their time in the program.

“Yeah, look they no doubt did (grow in confidence), and they had an extra year in the system,” he said. “When we first came in we deliberately didn’t have any bias particularly around age in preference of playing the older girls. “If the younger girls were better and we thought they had the potential to grow, we’d pick them. “In the first year or two we were a bit that way and then as they’ve got a few games under their belt – the 17s or the 18s last year might have been in the system for a couple of years, where it wasn’t about just trying to win games, it was about trying to develop kids and develop the list so we could be more competitive.”

Sharp said the club’s development as a whole had been “absolutely good” and they would continue with the same method under a different coach this season. Cherie O’Neill has taken over from Shawn McCormick who has coached the past three seasons. O’Neill has been involved with the boys’ program for the past couple of seasons so has the understanding of the organisation and its intricate workings.

The Pioneers will be a young group in 2020, with Sharp noting that the club picks the best possible players who trial over the off-season, rather than opt for a top-age heavy list.

“I think we’ll go for a list of about 35-40 and I’m guessing there’ll be about 10 or a dozen top-age girls and there could be as many as 17/18 17-year olds,” he said. “We might have four 15-year-old girls that’ll play that’ll be approved on application, that’ll play in our futures games. “But they’re better than some of the 17-year-olds and 18-year-olds. “So that’s why we’re playing them, and to give them a little taste.”

He said as with the boys’ program that selection would come down to weighing up both natural talent and athleticism, rather than age.

“There’s no point taking top-age girls again through who aren’t at the level,” Sharp said. “So the changes we’ve made, particularly with athletic profiling is that the girls that can run and have that athleticism and vertical leap that can still play – they’ve still got to be able to play – they’re going to get to more contests, they’re going to keep us in the game.”

The Pioneers have one player in the AFL Women’s National Academy – tall defender Tara Slender – who Sharp said is a perfect example of someone who has developed throughout the Pioneers’ program from V/Line Cup through to her first season of NAB League last year as a 15-year-old.

“She’s a great example,” Sharp said. “She went to the Academy up in Darwin recently and she’s quite well-equipped with other sports as well. “She’s an impressive kid, a really good kid who’s really committed and dedicated and she trains hard. “(In terms of) athletic profiling she’s what you need to be able to play today’s game at NAB League girls and AFLW, she’s the prototype – she’s your model there of what girls need to aspire to and she’s great at training so we’re looking forward to watching her play. ” She’s really committed to it, loves it, and if you put the work in you get the result.”

A late bloomer in terms of her age, Slender does not turn 17 until November, but she has proven to stand up at each level required. In her eight games last season, Slender averaged 11.4 disposals, two marks and three rebounds playing off half-back. With two full years left in the system, she is someone who will have plenty of development left in her.

But Slender is not the only player Sharp said spectators should watch out for with a number of top-age talents showing their skills last season as both footballers and leaders.

“We had a couple of girls last year in Brooke Hards and Elizabeth Snell who both played at the nationals in Queensland in July,” he said. “They’re both training really well, Elizabeth’s down here (Bendigo) and Brooke’s still up in Mildura so she’ll just travel down. “It was remarkable what she did last year, she left at 4:00 on Saturday morning to come to our trial games in Bendigo to watch the girls play – she didn’t play. So that’s the commitment there, it’s a return trip in the day equivalent to a drive from Melbourne to Sydney. “She’s (Hards) clearly our role model/leader.”

Asked if the trio would cover each third of the ground in similar positions to last year with Slender in defence, Hards in midfield and Snell up forward, Sharp said it was likely.

“I think so, I think we’ll spread them fairly evenly,” he said. “It is a development program and Tara will play in different roles but she’ll probably predominantly be at half-back where she’s pretty comfortable and reads the play and can intercept and use her left foot effectively. “You don’t want them all on-ball, there’ll be a spread, because otherwise you break down in those lines and then kids don’t develop. “And part of their development is to play them in different roles as well so they can experience those roles.”

The only confirmed overager at this stage – with list finalisation still ongoing – is Hannah Stewart, a talent from New South Wales who has also shown a remarkable dedication to the sport she loves.

“Hannah Stewart, who played in the National Championships in Queensland at that same time with the Eastern Allies – she’s a girl from Hay, in fact she was down at training last night from three and a half hours away,” Sharp said. “She would normally train in Swan Hill, which is only a four hour return trip. “She’s our only 19-year-old at this stage we think, I don’t know whether we’ll apply for another one or not, but she’s an elite kick and a good player.”

Sharp said across the list there were a number of potential surprise packets in 2020, including Maeve Tupper – who at 155cm showed she has no problem finding the ball with 15.9 disposals per game last year. Developing talent Madeline Marks and potential Melbourne father-daughter selection in Tegan Williams (David, 67 games) are also exciting prospects heading into the season.

“We’ve got some girls who have tested really well and we use that as a bit of a measure, it’s always an assistance. There’s a young girl who is really good athletically and she’s learning the game so we’re probably going to include her to take her to the next level, a young girl locally who’s showed some good things and has a really good attitude, because attitude counts for a lot. “We think the girls are in a pretty good position.”

Bendigo has one of the toughest challenges in the NAB League competitions with its network far and wide across hundreds of kilometres. Like some of the other country teams, the Pioneers have multiple bases to try and limit the travel and workload on the players, and Sharp said he is often amazed at what the players do to play at this level.

‘We’ve got four big bases in Mildura, Swan Hill, Echuca and Bendigo,” he said. That way we can actually provide an opportunity for the girls, give them a good reason to come to training. “So if they’re only within an hour of Mildura, an hour to Swan Hill or similarly probably half an hour or 40 minutes to Echuca, it just gives them an opportunity to actually be able to come in.”

One example was a new player in list contention with plenty of talent, but due to family work commitments struggled to get to training. Sharp said the club was always willing to accomodate in situations where possible.

“We’ve got a girl in Ouyen who may well be one of our better players, or she’d be in our best half a dozen, she’s only bottom-age, but hasn’t trained once but she came to the trial game and discussions were around ‘We can’t list her’. “But we need to understand the circumstances, she’s a girls from a multicultural background, I met with her dad who speaks broken English and said to him the other day, we want her to continue but she needs to train. “He works every day, he works late and he starts early and he’s a hard worker so he can’t get her from Ouyen to Mildura so we’re working on a plan to get her to train one night a week, because then I can justify selecting her, because I can’t not select her, “She’s that talented and she works hard. “There’s all these obstacles, it’s just the way it is.”

Off the field, Bendigo has already had a number of changes with the new coach working alongside Pioneers boys’ coach and director of coaching, Damian Truslove who was also appointed over the off-season. O’Neill is also on a part-time role rather than previously being casual or volunteer – emphasising the growth of the youth program. The Pioneers have also said they will look to appoint a female wellbeing coordinator to further grow the program.

On the field, Sharp said the team was looking to have a good balance of attack and defence heading into 2020, as well as some key fundamentals.

“I think it’s just making sure the girls have a good understanding of their offensive and defensive structures,” he said. “While we don’t heavily emphasise or haven’t done a lot of work on that, it’s the key part to what we do at training in regard to contested ball and where we get to receive it or where you get to defend it. So it’s a fairly simple format that Damian’s drawn up … and he works with Cherie who’s our new female coach so that we mirror it and all have a similar style. “So we haven’t done a lot of work on that, we’ve done a lot of work on fundamentals, just being able to mark, kick, handball, taking the ball cleanly below you knees so they’re the things we’ve mostly been working on.”

Bendigo Pioneers kick off their campaign on Saturday, February 29 at Queen Elisabeth Oval against Western Jets, before a trip to Highgate Recreation Reserve the following Saturday to face Sandringham Dragons.