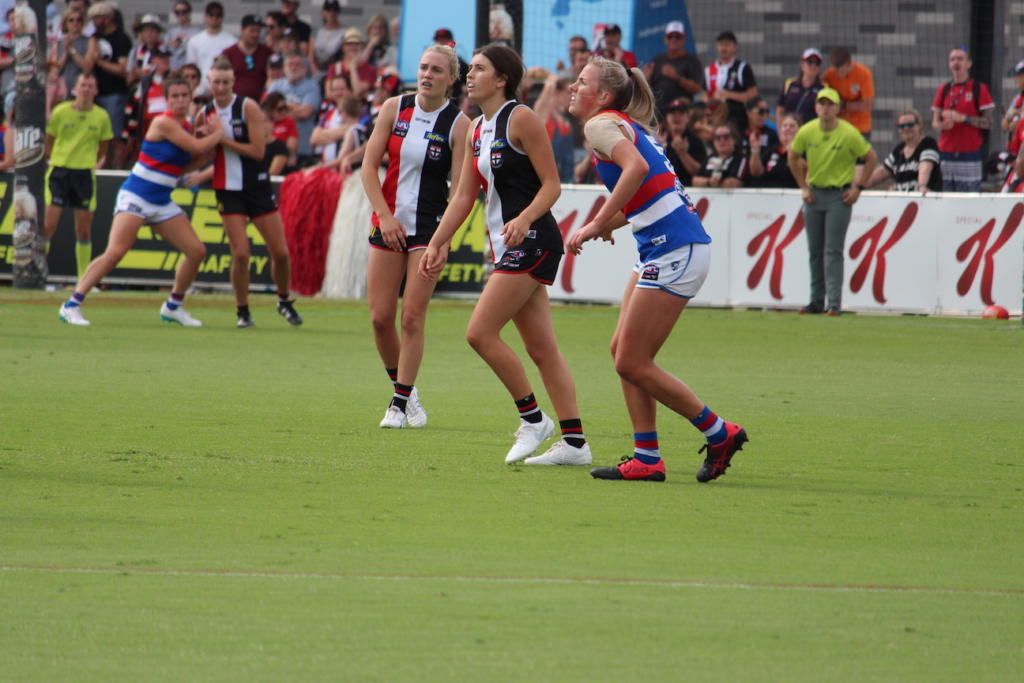 IN a new weekly piece, we take a look at some of the top young performers across the AFL Women’s competition in Round 1, focusing on those players born in the 21st century (2000 or 2001). We analyse match-by-match just how they performed and what they did well.

The Carlton young gun had an eye-opening first half where at one stage she was the leading disposal winner on the ground, reaching double figures. Being a prime mover in the middle, McEvoy finished her debut with 12 touches, five marks, four tackles and five inside 50s to show just why she was a top two pick in the AFL Women’s Draft. Readymade to play at the level and a leader to boot – premiership skipper at Geelong Falcons where she was a captain since 16 – she took a huge contested mark on the wing and was not afraid to crack in when required.

Last year’s AFL Women’s Under-18 Championships Most Valuable Player (MVP) was enormous during St Kilda’s loss to the Western Bulldogs. Putting together a four quarter effort, Patrikios was the clear star for the Saints and really thrust herself into Rising Star calculations in a performance that showed she meant business playing against some star players such as Ellie Blackburn. She recorded a game-high 18 disposals, as well as two marks, five tackles and three inside 50s, as well as a goal assist.

Last year’s Rising Star winner, Madison Prespakis had an absolute day out in Carlton’s 34-point victory over Richmond. She racked up 21 disposals, three marks, five tackles, two inside 50s, two rebounds and booted a goal in a best on ground performance. Along with McEvoy, Grace Egan was also prolific, recording 11 disposals and laying six tackles in a fierce effort on the inside. Charlotte Wilson was the other young star who played, picking up nine disposals. The Tigers had a tonne of young guns filter through the team, with Kodi Jacques perhaps the most prolific, recording seven disposals and three rebounds, while laying a massive seven tackles. Northern Knights premiership player, Sarah Sansonetti bested her with a game-high 10 tackles to go with five touches in the loss. Maddy Brancatisano, Laura McClelland and Sophie Molan also played and had some strong moments across the course of the match on debut.

GWS GIANTS’ first pick in 2018 AFL Women’s Draft was a star once again, stepping up to be her side’s highest disposal winner. Alyce Parker was the only one born this century for the GIANTS, and she represented the Millennium well with 22 touches, two marks, five tackles, three inside 50s and two rebounds. The SUNS had a number of first and second year players, with former Lion, Jacqui Yorsten the pick of the bunch after 13 touches, three rebounds and a huge 12 tackles in torrential rain. Serene Watson had six disposals and four tackles on debut, while Lauren Bella (19 hitouts) held her own against All Australian ruck, Erin McKinnon. Dee Heslop and Lexi Hamilton also played, with Heslop also recording three rebounds and four tackles coming out of the back half.

Both these sides are in the premiership window with experience galore and therefore are unlikely to have too much to say in this piece each week. In saying that, the ones they have are quality, with Tyla Hanks and Shelley Heath running out for Melbourne in the upset two-point win at a windy Casey Fields. Hanks was one of the best throughout, picking up 11 touches, two rebounds and laying four tackles, while Heath did a lot more than her seven touches may suggest, winning a couple of high frees and bursting away to give the Dees some pace with her run and carry. For the Roos, Daisy Bateman booted an important goal in the first term but had just four touches in a role that saw her predominantly play deeper forward.

The young Lions were ultra-impressive against a depleted Adelaide outfit, showing they can knock over anyone when on-song. Among the young guns running out in the match, Queensland Under 18s captain, Lily Postlethwaite had nine touches and laid five tackles to show she could match it with more experienced opponents. Nat Grider had nine touches and four tackles in her first game of her second year, while Isabel Dawes and Jesse Tawhaio-Wardlaw also played up forward, with the latter booting a goal – equalling her one goal from seven games in her debut season last year. The injury list at the Crows allowed a number of youngsters to step up at the elite level, led by second year talent, Danielle Ponter who had four inside 50s from her 15 touches. Of the first years, Madison Newman looked comfortable at the level thanks to 10 touches, two marks, two tackles and two inside 50s, while Nikki Gore and Jaimi Tabb also were able to earn their stripes.

Returning to Collingwood’s spiritual home at Victoria Park, the Magpies grabbed their first win in Round 1 from four attempts in the AFL Women’s competition. Mikala Cann and Jordyn Allen both showed why they warranted top 15 selections in 2018, with strong performances in the 27-point victory. Cann laid five tackles, had 13 touches as well as two marks and two inside 50s. Allen was a target inside 50, intercepting a number of defensive 50 exits to finish the match with 11 disposals, four marks and five inside 50s. Alana Porter made her debut in the black and white, signalling her intent early with a run-down tackle on Eagles’ speedster Imahra Cameron and providing some dash around the ground. She had nine touches and two tackles in the victory, while Lauren Butler also played and picked up a solid seven touches. Former Brisbane talent, McKenzie Dowrick‘s return to her home state of Western Australia looks to have been a success so far with the second year player recording 10 touches, two marks, two inside 50s and two rebounds on the weekend. Mikayla Bowen captained Western Australia at the AFL Women’s Under-18 Championships last year and brought all of that tenacity to the game with 10 tackles and eight disposals. Sophie McDonald also played, holding down a key role in defence.

Patrikios was the clear standout from the young guns in this match, but there were plenty to pick from as the future of the AFL Women’s was on full show at Moorabbin. Number one pick and Northern Knights premiership skipper, Gabby Newton played her first game and did not disappoint, rotating in the forward half of the ground and getting some midfield minutes on her way to 13 touches and a game-high eight tackles. The other two pups to earn a debut in Round 1 were Elisabeth Georgostathis and Gemma Lagioia, who were also members of the Vic Metro side that impressed in last year’s AFL Women’s Under-18 Championships. Georgostathis had eight disposals, three tackles and three inside 50s in the win, getting better as the game went on, while Lagioia looked classy with her six touches, two marks, two tackles and two rebounds. For the losing side, Molly McDonald would have arguably earned a Rising Star nomination had it not been for such dominant performances from Patrikios and McEvoy. The former Dandenong Stingrays’ skipper booted the club’s inaugural goal and had 12 kicks for 12 disposals, also amassing four marks, three tackles and two rebounds. Caitlin Greiser played up forward and provided a target with six touches and three inside 50s, while Nicola Xenos and Tarni White both earned debuts and stood up with some classy moments.

Sabreena Duffy was not eligible for a Rising Star nomination, but her performance was arguably the best of any Rising Star player. The second year former Western Australia captain booted four goals from 12 touches in a match-winning performance to help the Dockers sink the Cats in the west. Alongside her up forward and rotating through the ruck was first round pick and future star, Roxanne Roux who booted 1.2 and showed off her booming kick on her way to seven disposals and 15 hitouts. Her partner-in-crime through the ruck, Mim Strom stood up and had 14 hitouts and seven disposals also on debut to show the pairing is likely to cause some headaches for the opposition in the future. The Cats’ second year players picked up where they left off and look to be an elite core going forward. Olivia Purcell had leather poisoning with 27 touches, five marks, four tackles and five inside 50s, teaming up well with Rebecca Webster (21 touches, seven marks and three rebounds). Denby Taylor (12 touches, three inside 50s and two rebounds) covered plenty of ground, Nina Morrison returned from a long-term knee injury to boot a goal from nine touches in just her second game, while Sophie Van De Heuvel had seven touches and five marks, spreading across the ground well. The Cats’ sole teenage debutant was father-daughter pick, Millie Brown who was solid with eight touches in defence.