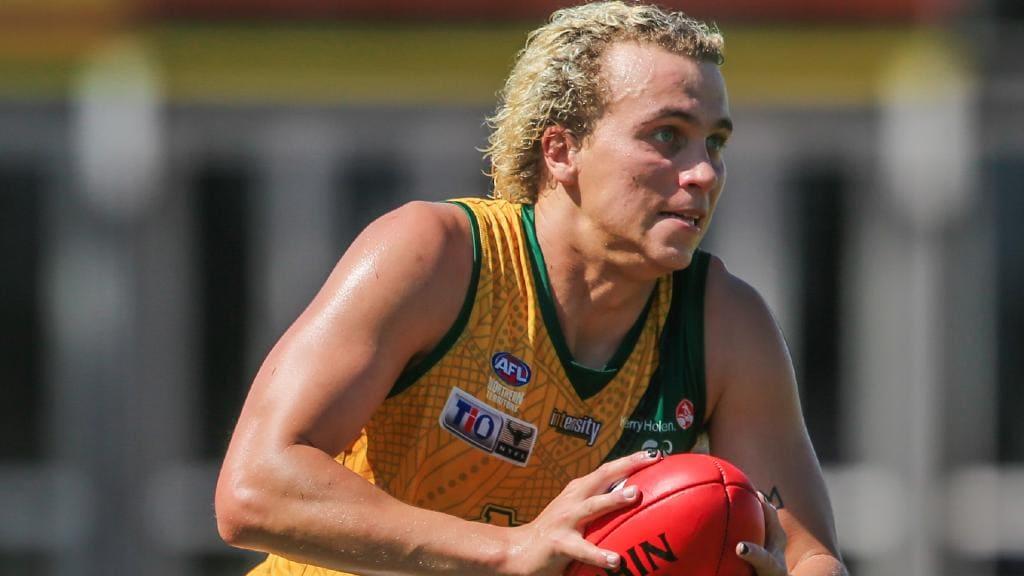 THIRD time proved a charm for St Mary’s in its ongoing rivalry with Tiwi, securing second spot and blowing the race for third place wide open in the process. Elsewhere, the remaining finals-bound sides picked up wins over the bottom three, with just one round left to play in the Northern Territory Football League (NTFL) Men’s Premier League.

Darwin is in prime position to pounce on third place after getting the four points over Waratah for the third time this season, brushing the Warriors aside to the tune of 54 points. The Buffs showed they are every bit the finals contender in what was somewhat of a danger game coming in, coasting home to the 13.17 (95) to 5.11 (41) result. Darwin took advantage of the three-goal buffer it set up in the opening term, notching three majors in each of the next two quarters before a 4.6 to 1.1 final quarter truly extended the margin. Club leading goalkicker Daniel Stafford made a successful return to the Double Blues’ forward 50, booting three goals alongside Ishmael Palmer, while young gun Djamatjama Wunungmurra managed a bag of four on his Premier League debut. Despite their efforts in front of the big sticks, Christopher Atkinson was named the Buffs’ best with a good amount on strength still to return to the fold. For Waratah, Michael Graham was the lone multiple goalkicker with two majors in an undermanned Warriors side, with his side unable to match their opponent’s firepower and class across the ground. Set in the bottom three, Waratah is set to face Southern Districts in the final regular season round, while Darwin faces St Mary’s in its attempt to hold on to third place.

Southern Districts remains a chance to jump two spots in the final round and snatch third after trouncing the lowly Palmerston Magpies by an even 12 goals. Spearheaded by competition leading goalkicker Will Farrer‘s eight goals, the Crocs were clinical inside 50 to make from an impressive 19.9 (123) to 7.9 (51) scoreline. After what was a tightly contested opener, the Crocs began to take over territory in the game and kick away, starting with five goals to two in the second term. It was all Districts after the main break too, with the hosts pouring on another 10 goals to two in the second half to pretty up the scoreboard and gain some valuable percentage heading into Round 18. Farrer was excellent throughout as chief destroyer, but compiled the misery late to make both his individual tally and the team margin more impressive. Three other Crocs booted multiple goals (three each), but it was Jayden Schofield who was named the winners’ best alongside Dean Staunton, with Michael Bowden also featuring in the best half-dozen for the third-straight match. In a similar vein, Kyle Emery and Sandy Brock were again influential in the losing Magpies side, but it was first-gamer Josh Filo who was named best afield, while returning bigman Matthew Dennis picked up right from where he left off. The wooden spooners’ disappointing campaign will come to an end next round against Nightcliff, with Waratah awaiting the Crocs as they look to snatch finals superiority.

Nightcliff consigned Wanderers an eleventh-straight loss, dominating at both ends of the ground to come out 58-point winners on home turf. The Tigers managed to keep the Eagles goalless in a first half shutout, steadily adding to their lead to build to the 13.9 (87) to 4.5 (29) end result. The first half was not as free-flowing as the Tigers would have liked despite their dominance, only managing five goals of their own while denying the Muk Muks. While scoring was easier to come by in the second half as Nightcliff notched eight majors, Wanderers also proved more competitive as it broke through for four goals of its own. Plenty of Tigers got a solid hitout heading into finals, with James Tsitas (three goals) and Danny Butcher both making successful returns to the side, while mainstays Shaun Wilson, Nathan Brown and Jonathan Peris were also named among the best. For Wanderers, Beau O’Connell was again a standout, booting two goals from midfield while fellow youngsters Tyrrell Lui and Dray Thompson also showed promising signs. The Eagles’ last chance to break their losing streak comes against Tiwi, which will see the fixture as a must-win, while Nightcliff can ease into the post-season with a game against wooden spooner, Palmerston awaiting it.

St Mary’s finally got one back over Tiwi at the third time of asking this season, trumping the Bombers to the tune of 49 points in what could well be a post-season sighter. The Saints were brilliant across the ground, showing fluency on each line to wind up 13.9 (87) to 5.8 (38) winners and officially secure second spot. An even opening term saw the Bombers claim their only lead of the game, albeit by the slimmest of margins, before St Mary’s hit back to sneak in front at the main break while keeping the Bombers goalless. From there on, the Saints tripled the Bombers’ second half goal tally with nine to three in a dominant display, putting the result beyond much doubt with a quick surge after half time. The ex-AFL duo of Shaun Edwards and Jackson Paine showed their class to be two of St Mary’s best, while Jackson Calder booted a game-high three goals and Shannon Rioli, two. South Australian Charlie Molyneux was again best afield for the Bombers upon returning to the lineup, with Ross Tungatalum not far behind as Tiwi’s lone multiple goal kicker and Jason Puruntatameri continuing his good form. St Mary’s could again foil Tiwi’s top three plans if they fall to Darwin next time out, while Tiwi will need to overcome Wanderers if it is any chance to avoid an elimination final berth.