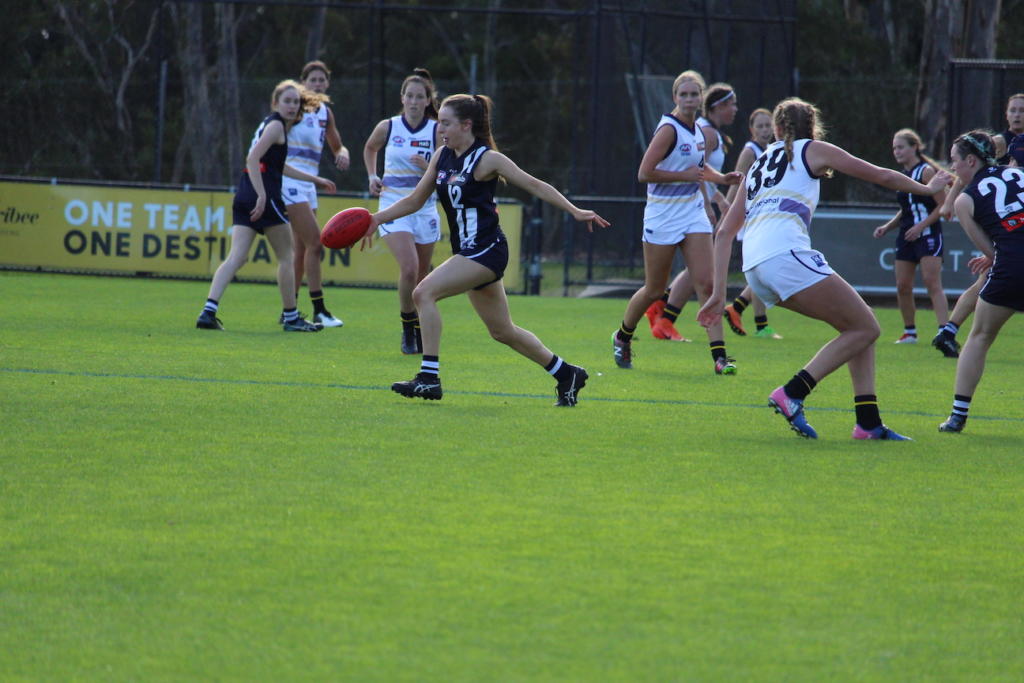 AFTER a 2018 NAB League Girls premiership and a finals appearance in 2019, the Geelong Falcons have been quietly building a young list that has no shortage of future talent. With the more than a quarter of its list containing 15 or 16-year-olds in 2020, new Female Talent Manager Bree Beckley is excited about what the year will bring.

“I think the girls have a lot to live up to in the last couple of years that the NAB League has been around,” Beckley said. “But I think it’s probably a bit different because they had a really strong group of top-age girls who have all come through the program and moved on together so now it’s kind of building from that bottom up again. We have 12, off the top of my head, 15/16-year-olds in the team, so that will be nice to see them all come through and develop together.”

Beckley credited the V/Line Cup program with a pathway that enabled the next group of talented footballers to come in and replace those who had departed the club.

“Every pathway coming in really helps, so from that V/Line 15s and 16s teams, it’s good to see them develop,” Beckley said. “I guess you’ve got that core group coming through and a couple of local girls who have trained really hard and proved themselves in the local league and really stepped up in the program as well.”

Not only will the playing group have plenty of fresh faces, but the off-field team will too with Beckley taking over from inaugural Female Talent Manager Katie Geerings, while former Western Bulldogs senior coach, Brendan McCartney will lead the team as coach, replacing the departed premiership coach, Jason Armistead.

“It was difficult at the start, I mean a whole new staffing group pretty much came across,” Beckley said of her transition. “Only a couple of line coaches stayed so it was difficult at the start but once all the girls knew all the program, that part of it made it easy which was nice. “I did a couple of volunteer days last year so towards the end of the season, volunteered on the way in and then Mick (Turner, Talent Manger) and Dean (Pearce, Football Manager) have been really helpful as well, so those are the people I probably lean on the most coming into this role.”

While the previous group did terrific things for the organisation, Beckley is excited about what the future will hold for the Falcons as they look to build on the foundations set by their predecessors.

“Jason’s done an awesome job with the girls and obviously you can see over the last couple of years the program was ran pretty well,” Beckley said. “I think we’ve got to push on from that and with Brendan McCartney coming in and I think it’s a big name. The girls probably don’t understand how much he’s done and how much involvement he has had in AFL clubs. “Around training and stuff like that, they don’t take it for granted but they are just so down to earth and I think that’s how he wants it as well. “He doesn’t say ‘this is what they do in AFL, you have to do it here’, he just lets them play it out and his coaching is amazing. Coming from AFL level, it’s really helpful for the girls.”

Coming in fresh, Beckley’s experience of the side was purely from an onlookers perspective, but did get to interact with some of the future stars of the AFL Women’s through the Geelong VFL program where she played.

“I’ve followed them, I went and watched a couple of games but pretty much coming in completely new,” Beckley said. “Knew a couple of the girls through other sporting things, but didn’t know a lot of them. “I also played VFL so with Lucy McEvoy and a lot of the girls that came through. “That was kind of a way of knowing how the program ran so that was really helpful as well, knowing from their perspective.”

The new Female Talent Manager has helped impart knowledge to the group about the various pathways to the top and can relate through her current playing days at that state league level.

“I think it’s obviously a step up from the local league and then coming into NAB League,” Beckley said. “Again it’s a step up from NAB to VFL but unfortunately I didn’t get to do that myself (NAB) but coming from the NAB League to the VFL, I think it’s really important for the girls to know the pathway in, how they can make it further if they don’t get drafted. “I think it’s just the work ethic coming in is really important for those girls. “It’s nice to be able to pass it on from a players’ perspective as well.”

The Falcons have had plenty of talented players over the past few years, and 2020 will be no exception with a couple of top-age AFL Women’s National Academy members.

“Two girls in particular – Darcy Moloney and Laura Gardiner are a part of the AFLW Academy squad,” Beckley said. “They are definitely ones to watch. “But we have girls training really hard, and a couple coming back from injury and they will probably have a big impact for the team as well. “As well as probably (pre-season performers) Lucy Were and Renee Tierney. “They are doing an exceptional job, leadership wise as well. “It’s awesome for the girls to have them always talking in drills. “Pretty much just leading the way in the pre-season which has been awesome. “The group dynamic of the girls has been unreal. Like when I came in I couldn’t tell you who was top agers and who was bottom agers because they’ve all mixed and trained really hard together, which has been unreal to see which is good.”

Each year dual-sport athletes or cross-coders impress enough to earn a spot on a NAB League list and this pre-season is no exception. The Falcons have welcome a high-level basketballer to the frame who Beckley has touted as one to watch this season.

“I think the main one would be Carly Remmos,” Beckley said. “She hasn’t played any footy at all. She’s a high level basketballer and a top-age girl so I reckon she’ll be one to watch and she’s really hard at it – her brothers have come through the program. “With the football knowledge being around her brothers, I think that she’s just a bull. “She will just go in and get it, just that natural instinct.”

The Falcons begin their competitive matches against the GWV Rebels up in Ballarat in a game of six sixths to enable them to view as many players as possible ahead of the season start at the end of the month. Geelong’s opening round encounter pits the Falcons against fellow country side, Gippsland Power with the two meeting halfway at RMIT Bundoora. Beckley said the players were keen to continue building the winning culture, but also strive to be the best possible people on and off the field they could be.

“One step at a time, but I think all the girls don’t play sport to lose, they will want to win and win as many games as they can, have really good starts for the year,” she said. “Make that top four, so just keep progressing as far as they can. “I think it’s very important to get some big scores on the board as well which is nice. “I think they’ve been pretty low scoring matches. “(It’s) not necessarily (a focus), but it’s nice to get a score on the board.”

Outside of the on-field results, the group has identified how it wants to play in season 2020. Led by Moloney as captain, with Were, Tierney and Poppy Schapp as vice-captains, the Falcons are keen to stand by each other and play as a team throughout the competition.

“I think the girls are really big on supporting and getting around each other,” Beckley said. “When they spoke about their values and their leadership, it was all about being one team, so I think if they can develop and adopt that kind of value and just going forward it will be really, really good to see. “Hopefully they can get the results out of that.”