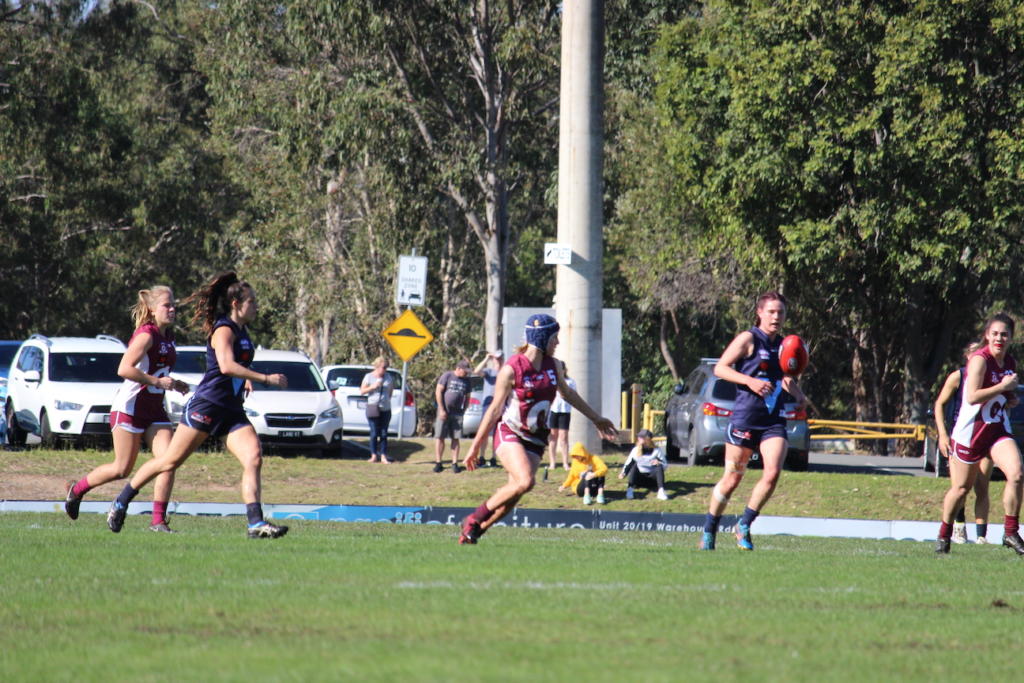 COMING from North Queensland, it is no surprise that growing up, Daisy D’Arcy took up rugby. Right in the heartland state of the sport, D’Arcy naturally went into that code. It was not until her mother suggested another code that was ever-growing in Queensland, particularly in the female space.

“I got into AFL two years ago,” D’Arcy said. “Back in Townsville my mum told me about this ‘come and try’ day so I thought I might go over and have a crack because I’ve played rugby before and I wanted to see if it was similar. “I enjoyed the contact side of it, so I went to that and I pretty much fell in love with it from there.”

D’Arcy might have fallen in love with the sport’s technical side, but it was the social atmosphere that kept her around, thriving on both the on-field and off-field benefits of the team sport. D’Arcy said those people you meet along the way are what makes the journey so special.

“Just the people,” she said. “It’s a great atmosphere and the teams, I dunno – when you have a love for a sport it’s pretty obvious, I just enjoyed it.”

Reliability is her self-proclaimed number one strength, while ironically strength is her main focus of improvement in order to provide greater physical support to her teammates on the field.

“My strengths I feel are being reliable,” D’Arcy said. “I feel as if I can get in a position to help support or create something. “Something I’m looking to improve on is my strength, just because I’m not as big a build. Just the strength so I can support my teammates by making either a shepherd or a tackle.”

D’Arcy is one of four top-age Queenslanders in the AFL Women’s National Academy this year, coming off a strong bottom-age year that saw her feature at the AFL Women’s Under-18 Championships. Despite coming into her draft year, D’Arcy still finds the time for both Australian rules and rugby, along with her school commitments.

“I still play both,” D’Arcy said at the championships last year. “But I enjoy them both at an equal level, but there’s just something about AFL that sort of overtakes the factor of rugby.”

The North Queensland teenager admitted there was a fair bit of travelling involved to compete not only in her state, but across the country and it had been a big two years on the road and in the air. But it would not have been possible without the ongoing support of her family.

“My family would be my biggest inspiration because they know I can do better so they push me to my limits and it’s worked out pretty well so I’m thankful for that,” she said.

Now her sights are set on reaching the elite level – AFL Women’s – and while she understands it is a difficult goal to obtain – she is well on her way to making the most out of herself and her football career, at whatever level that may be.

“(My goal is to) hopefully to achieve high things like getting drafted would be amazing but just pushing to try my hardest and make teams like these which is pretty amazing for me,” D’Arcy said.