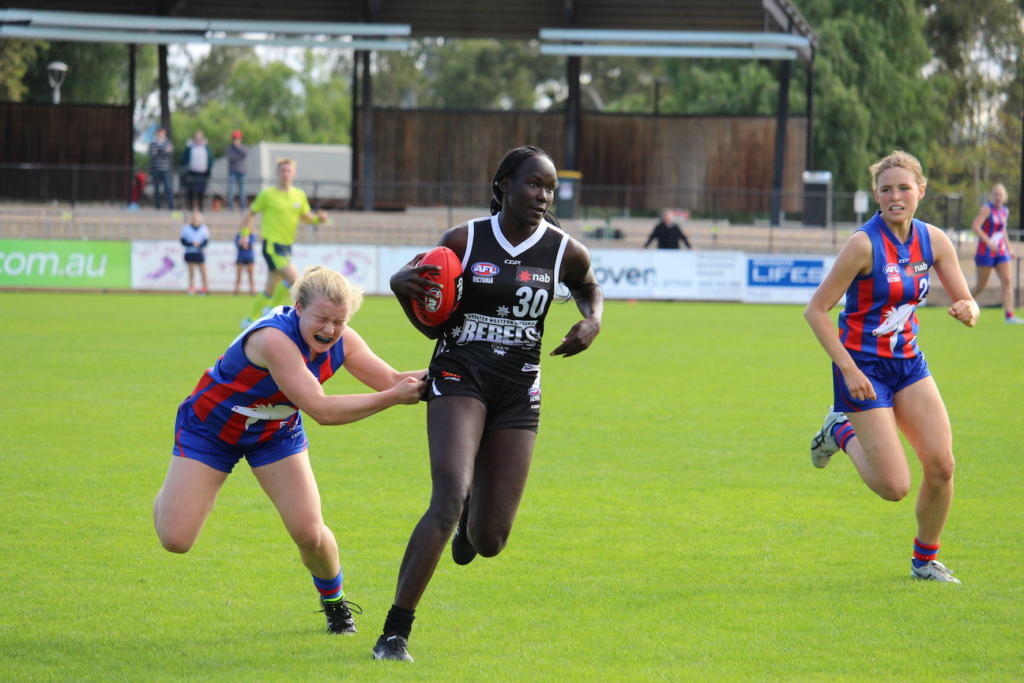 FUNDAMENTALS have been the focus for the Greater Western Victoria (GWV) Rebels’ NAB League Girls side as the Ballarat-based club prepares for the 2020 season. Head coach Rhys Cahir said his second full pre-season in charge – having taken over from Jeff Whittaker in March, 2018 – had gone well as the players looked to step it up a notch in the skills department.

“It’s been a pretty solid pre-season again,” Cahir said. “We’ve been pretty big on getting the fundamentals right early so we had a lot of kicking early, specifically to get it right. “It’s such a big skill to master in the game and the girls, we allowed them to work as much at it. “We haven’t done a lot of fitness stuff but the fundamentals were our biggest thing we looked at this year. “We are seeing that it is a vast improvement straight away.”

Now the top-agers have adjusted to a number of pre-seasons, Cahir said it was clear the talent pool across not only the region, but the country was growing.

“Each bottom age group seems to get better and better than the year before,” he said. “It’s just that girls footy is growing and not just in this region, but all over so girls from Auskick can play all the way through instead of stopping three or four years and just coming in because their friends are playing. “It’s their number one sport now and the talent shows right through pretty early.”

Last year the Rebels had three players land on AFL Women’s lists – in fact just the one list – with Sophie Molan, Ella Wood and Nekaela Butler all selected by Richmond in last year’s AFL Women’s Draft. Cahir credited the off-field nature of the trio, and the Rebels’ program itself for providing its players with the terrific support needed to impress at the next level both on and off the field.

“Very exciting. For the second year in a row, we had three girls go to Geelong the year before, then three go to Richmond,” Cahir said. “For us, it’s good for our program that clubs are seeing that we are creating a good environment where the girls can play good footy, but they’re good characters as well and it’s exciting that clubs think that we can produce good footballers and good people. “Last year I was a part of Vic Country and had a bit of a say but Ella and Sophie probably picked themselves with the main lot,” he said. “You try and push your own wheelbarrow a little bit and get a few girls there, but the whole comp is getting too talented. “If AFL clubs ring up, I’m happy to talk all our girls up, not just about their football, but about their character. “I think that’s why Richmond were so keen to get the three of them. “More their character and what they could get out of them on-field and off-field. “They’re building something at Richmond so we are looking at building and pushing them on-field and off-field.”

Some of that character was evident with Molan’s extra responsibilities as captain, such as leading the warm-up before the coaches got on the ground, pre-game. Cahir said while the coaches gave her the green light to take that responsibility, it was not hard for the natural-born leader.

“It was part of me encouraging Soph to be herself,” he said. “Yes, she was the best player in the side and a natural leader but that was mostly on her a few times. “Good players can do that, they can sense when the whole side is down and need a spark or need a rev up or a bit of a cuddle to settle them down. “Terrific leader just naturally. It wasn’t something we had to push or tell her to do, we just helped her with it.”

While Molan and Wood both earned places on Vic Country’s list, Butler missed out but did not give up on her dream, earning a place on the Western Bulldogs’ VFLW list with support from her coaches and her own sheer determination.

“Nekaela was the one we thought early we could really push and highlight what she could do,” Cahir said. “She was terrific off half-back, we tried her in the midfield a bit early. Played well, but just played consistently off half-back. Unlucky to miss Vic Country but she got down to the Bulldogs’ VFL. “We kept pushing her to say ‘do everything right, get to every training, doesn’t matter if you don’t get games, do all the little things, someone’s always watching’. “Got a game of VFLW, played really well her first game and as I said there’s always someone watching you’ve just got to do the right things, and terrific character as well too. “She wanted to work, she has a bit of a laugh, but she can obviously play football as well.”

Looking ahead to 2020 and there are another three talents in the top-age bracket that have already been identified as members of the AFL Women’s National Academy. All three are very different players, but each add a unique element to the line-up.

“I’ve been pretty excited to see the three top-age Academy girls in Maggie Caris – who is really good in the ruck, went away and played for the Vic Country side and played some really good games. “Same with Isabella Simmons and Renee Saulitis, really excited for them to take the next step because they’re all super talented. “But now they drive the whole group because they’re the leaders as well so they can take their game to the next level. “We’ve also got a couple of younger ones that are just super talented coming through because they are naturally playing football from a young age now.”

Caris has a big year herself across multiple sports, representing Australia at Under 19s level in netball while entering her most important year of schooling. Cahir said the club was working with her to support her both on and off the field wherever possible.

“Well at the moment she’s extremely clever too, she’s gone into Year 12,” Cahir said. “I’ll let Maggie not run her own race, but monitor what she does. Tell her to have a break when she needs. “It’s a big commitment to be an elite AFL footballer or NAB League footballer, in the Australian Under 19 Netball side and going into Year 12, so we are pretty big on welfare and players looking after themselves and footy comes second, third and fourth if we need be.”

Along with the top-agers, Cahir said the talent at the bottom of the list in terms of age was constantly improving, with 16 and 17-year-olds always stepping up to challenge the 18-year-olds and try and force their way into the starting side.

“A couple of girls in Vic Country last year,” Cahir said. “Nyakoat Dojiok is just going to take leaps and bounds when she finally figures out she can play the game. “Ella Friend similar, Vic Country last year and in the bests. “Growing into her football and just keeps working. “Lilli Condon‘s flying, and even the bottom-bottom-ager in Paige Scott who’s going to come into the program from V/Line Cup last year is just a natural tough country footballer but will grow and grow for the next two years.”

Having recorded the two wins last year, Cahir said it was always nice to win, but at the end of the day, the focus – as it has always been – will be on development. With seven girls drafted in two years, the Rebels are one of the most successful organisations from the NAB League Girls competition when focusing on a development standpoint, and the Rebels coach hoped that would continue.

“We just want girls to have a crack,” Cahir said. “Yes they might not play in their favourite position all the time but it’s about development in themselves and outside if we win games it’s great, but it’s about pushing them and getting better and giving them a chance of playing AFLW. “If we lose no games and get three or four drafted, great. “If we win every game and get none drafted we probably haven’t really done our job, so it’s just keep developing in themselves, give them a bit of help with what we think could get them there, and not worry too much (about) what they can’t do.”

The GWV Rebels have a couple of trial games coming up, including a match against the Geelong Falcons in Ballarat. Following the trial games, the final list will be decided and a leadership group will be formed. Cahir said the players would vote for those leaders, but admitted there were a number of players who could easily lead the side.

“The next couple of weeks, we’ll give them a list and they can vote for four or five girls and announce it on the camp who will be our leaders,” Cahir said. “We’ve got some terrific leaders, Maggie, Renee, Chloe Leonard who is similar to Sophie Molan, is just a natural leader. “Whoever the girls pick we’ll be more than happy to support them and push them through.”