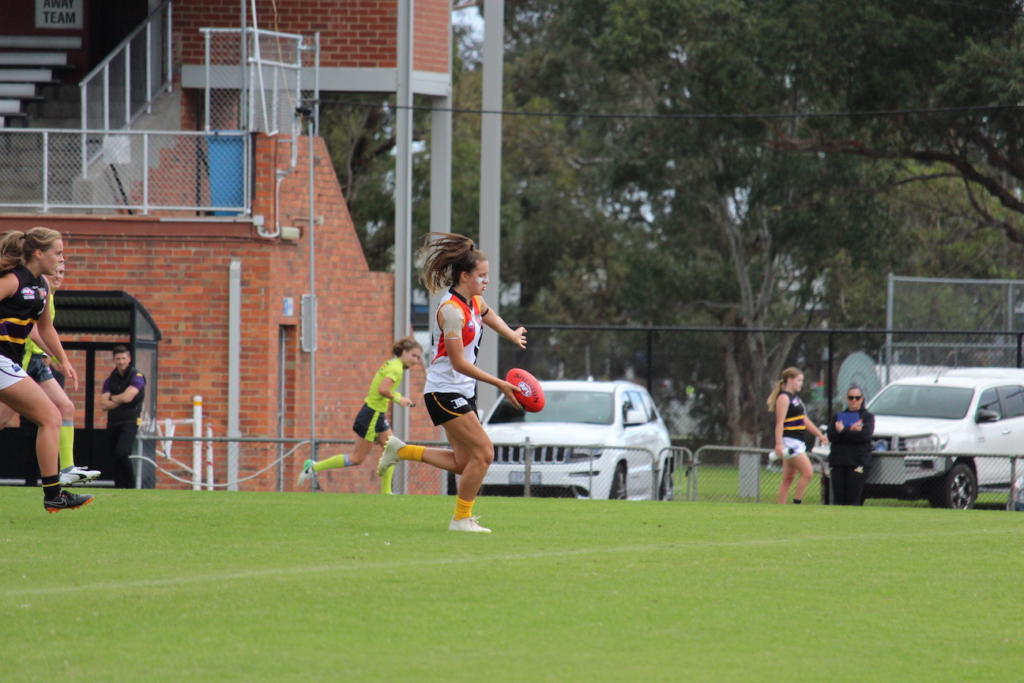 DANDENONG Stingrays will have a “different feel” to them in the NAB League Girls competition this year after a large list turnover saw plenty of fresh faces make the squad for the upcoming 2020 season. Female Talent Manager, Matthew Crozier said the squad was raw but talented with plenty to like about the coming years at the club.

The three standouts that Crozier is excited to see perform this year are AFL Women’s Academy member, Tyanna Smith, as well as midfielder, Abbey Jordan and tall defender, Zoe Hill. He said the three led by example out on the track over the pre-season and were prepared for a big year which he hoped could continue to place them in the spotlight for the AFL Women’s Draft at year’s end.

“Tyanna Smith’s been pretty good,” Crozier said. “Abbey Jordan’s come back like a house on fire so pretty stoked for her at the moment. “Zoe Hill from Vic Country last year has got a lot fitter and come a long way. “Those three are hopefully going to go to Vic Country and hopefully got to a VFL club later in the year and show them what they’re made of.”

While Smith was renowned for her acceleration out of the stoppage and ability to get goal side with ball-in-hand, Crozier said she would be “thrown around” into different positions to showcase her versatility and appeal to AFL Women’s clubs. Jordan’s run and carry will become a feature in the forward half of the ground, while Hill’s ability to play well as a defender on the last line will be tested up the other end of the ground at times.

“Yeah we want to mix it up,” Crozier said. “We want to try and play her forward and give her an opportunity, but in saying that, that’s her best position and probably the position she’s going to play at Nationals. “Hopefully if all goes to plan, we’re a development program, we’ve got to try and put these girls up in lights and expose them to the AFL clubs and the national recruiters to get them there, and that’s obviously with the 16s as well.”

The Stingrays list is set to be young again in 2020, with one 19-year-old prospect a potential excitement machine all things going well.

“We have one girl who’s never played footy in her life – Serene Vudiniabola,” Crozier said. “She’s played at Haileybury at 2019 in her Year 12 year. “Previously a sprinter at about 183 (cm), she’ll be exciting but she’s not sure what she’s doing with uni yet so we’re waiting to see on that. “But for a player who never really played a competitive game, at local or in a program, she’s going to be a really good force to be reckoned with if she makes our list.”

Vudiniabola is not the only cross-coder to test their hand at Australian rules, with a couple of other talents already on the list, including an AFL Women’s National Academy member in Jaide Anthony.

“There’s a lot of basketballers and those with cricket as well like Jaide Anthony,” Crozier said. “Jess Matin who hasn’t really done much with us, but is a really good talent and hopefully going to be a bit of a smoky later during the year. “She’s never been in a NAB League program before so hopefully she has a really good year and has been touted at the next level. But she needs to prove herself here at the moment.”

Along with Anthony, there are a number of 17 and 16-year-olds that could catch the eye throughout this season and the coming years.

“We’ve got a few (bottom-agers to watch),” Crozier said. “Amber Clarke really, really good player had a good V/Line series. “Mackenzie Eardley is about six foot and she’s 15 and could play as a wing, a running wing or a running half-back. “She played a Futures Game with us last year and didn’t look out of place so hopefully this year she can push for a spot in the first side. “Another one we have in Monet Ferris who was in the Gold Coast SUNS Academy and played Under 15s for Queensland in the girls competition down in Tasmania last year. “Her family moved down at the end of last year and were looking for a club, and fortunate for us she landed right in the middle of our zone, so that was fantastic to get her. “But that bottom-age group is a really strong age group and I would expect in the coming years with the development and work we will put into these girls that they’ll push forward.”

The Stingrays season unofficially kicks off on Saturday with the first competitive hitout of the pre-season taking on the Western Jets at Seaford, followed by a second clash against Oakleigh Chargers on Sunday, February 16. Crozier said he felt it was a better tune up for the real season by having a couple of trial games.

“Last year we only had one hitout prior to the season and now I think having two, it will be more beneficial for the girls and the coaches as well,” he said. “We have a really new coaching group as well. “From last year we’ve only kept two coaches, and we’ve got another eight development coaches who are mostly female now. “We’re looking at not only developing players, but developing coaches and people as well, and females in footy.”

The Stingrays came close to sneaking into the NAB League Girls finals last season, and while Crozier admits it would be nice to play in those “marquee games”, that was not the goal of the organisation in the development league.

“I don’t really have many expectations,” he said. “It’s always good to win games but for us, it’s the cliche answer. “I couldn’t care if we were none and nine as long as we do our job, and all 48 girls on our list leave the program better than when they came in – an influence back at local or VFL or Nationals – that’s a win for us. “I know the girls and some of the coaches at times really want to be playing in those games. “They are marquee games and they get looked at by a lot more recruiters. “It would be good, but I still think Northern and Calder and those types of teams are going to be the ones to beat.”

There has been plenty of change at the club with Dave Carden coming on as head coach of the Girls’ program after success at Hawthorn in the VFL Women’s.

“He had a couple of years there and was involved with their premiership back in 2018,” Crozier said. “He’s been really good and he’s brought a couple of development coaches in with Steph Carroll – I think she captained that side in the premiership year. So she’s been a really good player transitioning into that coaching fraternity now. But she’s been really good on educating the players and what it’s like to train, especially the younger ones what the training standards are. “It’s been good.”

Dandenong Stingrays have a tough start to the 2020 NAB League season on March 1 against last year’s finalist Eastern Ranges at Beaconsfield, before facing last year’s grand finalists back-to-back in Calder Cannons and Northern Knights on the road.