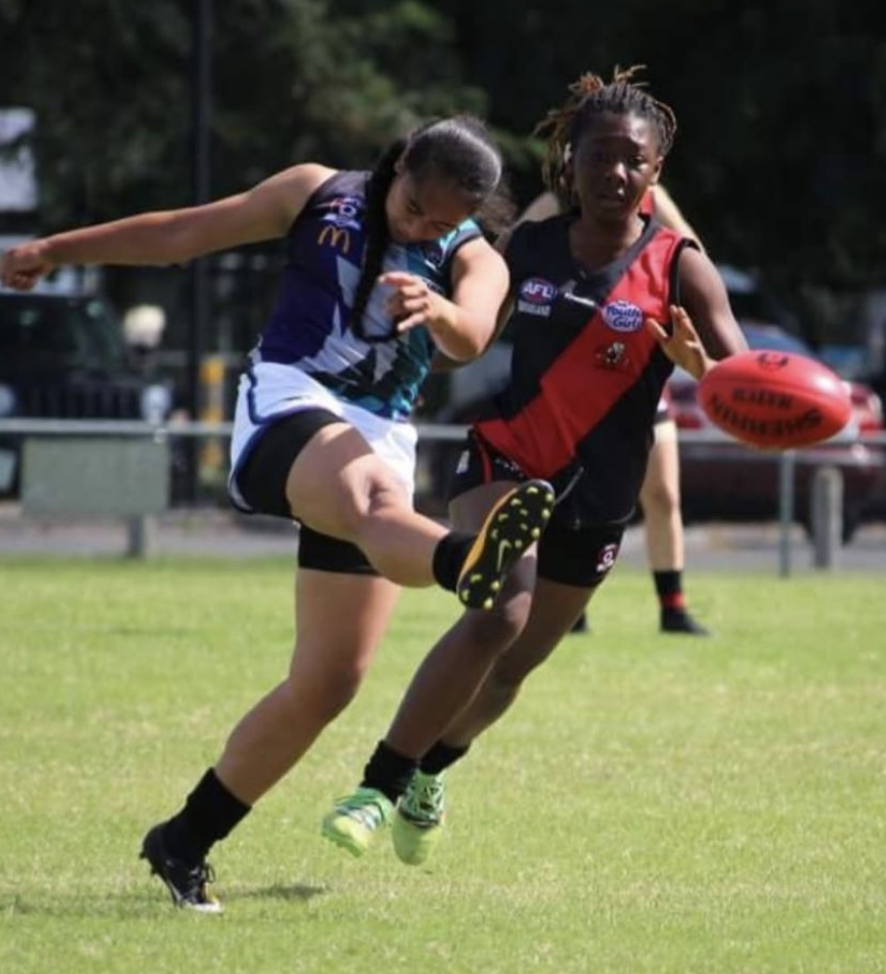 “I didn’t start in AFL, I started with athletics and then went into touch football and started playing rugby,” Okesene said. “So from there, I kind of didn’t want to change sports but my dad encouraged me to. “I was like ‘alright, I’ll give it a crack’, so I went to Springfield to one of their pre-season trainings and thought ‘Yeah, why not?’.”

While the sports might be different – such as handballing instead of throwing – there were some clear similarities that brought about the suggestion for change.

“I did play a bit of AFL when I was little, because my friends were doing it so I was like ‘Why not?’ and then my dad pushed me to do it because I was good at kicking,” Okesene said. “In rugby I would always kick, there was no play where I wouldn’t kick. “It was always after the first tackle I’m kicking and chasing or it’s the fifth, so he’s like ‘You should (try) AFL, you’ve got some good kicking skills’.”

Okesene said not only did her family believe in her, but also her coaches throughout out her journey, culminating in her selection for Queensland at last year’s AFL Women’s Under-18 Championships. She hoped all the help from those around her would assist in achieving her goal.

“To be honest … the staff here are really supportive and I know it’s not a humble thing to say but them just pushing me and believing in me, seeing the talent that I have,” she said. “They continue to push me and the support they have from the beginning – even the local club I’m at pushing me to get a career or try to make it to the elite level.”

Along with her close family bond, Okesene said she was honoured each and every time she ran out on the field, making the most of her opportunities in life. She said if she could make the top level, it would mean so much to not only her, but to her family and community.

“Not only to make a career out of it, make the elites, but to represent everyone – supporters, family, friends, to be able to represent the country as well would be an absolute pleasure. And being a religious person, it would be a blessing just to represent God.”

Okesene listed kicking and her speed as strengths, but admitted she wanted to improve the accuracy of her disposal to match the power.

“Even with rugby I wasn’t too good at just pulling up with my kicks at the spot where I wanted for my plays to get there,” Okesene said. “It’s either I pull up too short or it’s gone too far so accuracy would be a main thing that I want to work on with AFL.”

While she has reached the top junior level with the championships, Okesene understands it is only really the start of her journey in the sport.