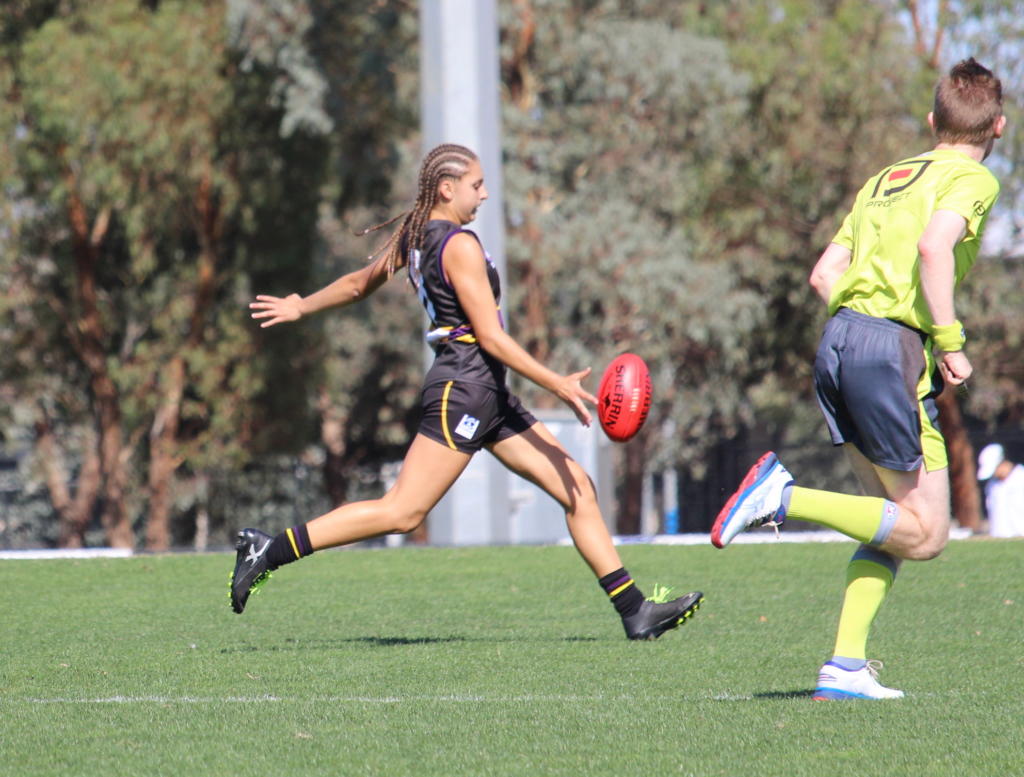 MURRAY Bushrangers have been able to reduce the player-to-coach ratio ahead of the 2020 season thanks to the determination of their NAB League Girls playing group, and additional development coaches. Ahead of the 2020 season, Female Talent Manager Briana Cossar said she was excited about a number of players coming through the program – not just for top-age talent, but middle-age and bottom-age talent as well.

“The girls’ enthusiasm, dedication and commitment to the program has resulted in a solid pre-season,” Cossar said. “They’ve really come together as one unit which is a testament to their characters and with a revamped coaching group, which has included additional staff, the player-to-coach ratio has been reduced, playing a pivotal role in increased rate of development compared to last season which we see as vital for continued development and growth of the program. “We’ve got a lot more depth and some really good 14, 15 and 16-year-old players coming through which will be exciting to see their development over the next few years. “

The Bushrangers have three players in the 2020 AFL Women’s National Academy, with top-age talents Abby Favell and Olivia Barber, as well as bottom-age tall, Ally Morphett. Favell starred as a natural ball winner for the Bushrangers, NSW-ACT Rams and the Eastern Allies last season, looking sharp as an outside runner who stands up in big moments.

“Abby has the ability to break the lines and her run and carry are elite,” Cossar said. “Her leadership qualities are second to none.”

Barber had a breakout National AFL Women’s Under-18 carnival after a solid season in the NAB League Girls as a key forward who could also play ruck. The then middle-ager was able to create all sorts of headaches for defenders, not just with her ability to clunk grabs overhead, but her ground work and recovery were also impressive on the Gold Coast.

“Olivia is a tall target up forward and a strong overhead mark,” Cossar said. “She’s got a great attack on the football and has an ability to create separation using her strength.”

Morphett is still a year away from being draft-eligible, with the 186cm player likely to predominantly play ruck, though she could also rotate forward and provide a marking presence.

“Ally plays mainly ruck, but can play key position forward,” Cossar said. “She has a great kicking technique and is very good overhead.”

Other players to watch from a top-age perspective include Sam Pritchard – who according to Cossar is “training the house down” – and smart small, Kate Adams. Pritchard recorded an impressive sub-eight minute 2km time trial and plays as a small forward who has a nice blend of pace and endurance. Among her other strengths are her elite kicking ability and clean hands. Adams has been a player who has impressed over the past couple of seasons coming through the Bushrangers’ program, playing in a number of roles, but similarly is a silky small who has natural footballing ability. Cossar said Adams’ reading of the play, awareness and decision making are engrained, while she is a great on and off-field leader.

Anyone who watched the Under 16s all-Victorian clash last year would have remembered Keely Skepper who starred in that match and while she is a bottom-age talent, the rebounding defender is one to keep in mind for the future. “She is a natural footballer in every aspect of the game,” Cossar said, describing her left foot as “elite” and has a great ability to find the ball and rebound it out of the back half. Other middle and bottom-age talents to watch for in 2020 include Aurora Smith – who has the ability to break the game open with her run and carry, credit her speed – India Lehman who Cossar describes as a natural footballer who is also a great on-field leader, bringing others into the game, and Mindy Quade who has great positioning in one-on-one contests and takes the game on at every opportunity.

While the core base of talent is there, Murray also has a couple of players who have been building nicely over the off-season and have been touted by Cossar as ones to watch.

“Lily Sharp and Mikayla Jones are both looking to take their games to the next level,” she said. “Their fitness and fundamental skill efficiency have improved, and both have a good game sense.”

“We want to be instinctive, creative and take the game on at every opportunity, and be competitive for four quarters,” she said.

The Bushrangers host Oakleigh Chargers in the opening round of the season on March 1 at 1pm, before travelling to Bundoora for a clash against Western Jets as part of a NAB League Girls double header on March 7 at 1.15pm.