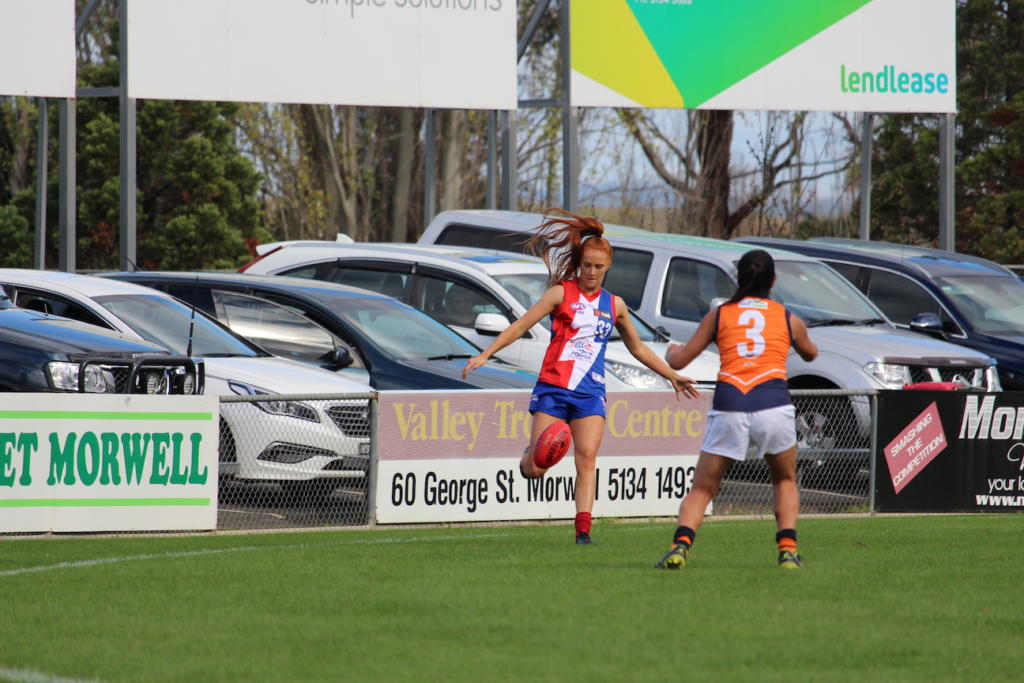 GIPPSLAND Power’s “really young” group from 2019 has a year of experience under its belt, with plenty of exciting players coming through the ranks, Female Talent Coordinator Chelsea Caple is excited about what 2020 will bring from a development standpoint. The Power might have only recorded the one win – over the Greater Western Victoria (GWV) Rebels – in 2019, but the squad which contained a plethora of bottom-age and even 16-year-old talent learned some valuable lessons that will hold them in good stead for the upcoming season.

“I think with the experience that all of our bottom ages and our Under 16s were exposed to last year, we had Under 16s playing every single game and they got so nervous and I think now they’ve had that season under their belt, it was a tough season,” Caple said. “They can learn from that and understand that they’ve got now that experience so they can go out and actually show our younger ones how to do it. “

Like any organisation, the Power had tested what training methods got the most out of the players, and once they found the right mix, they were able to excel and build on the momentum over the pre-season. Caple said both the boys and girls testing as one group really pushed every member of the squad.

“We’ve been really excited (with) how our preseason has gone,” Caple said. “We’ve changed it again. “So last season the girls trained twice a week, we brought them in still on a Tuesday night and then they trained with the boys on a Friday. “We though that intensity worked really well; we weren’t able to bring that across to the training once the girls were just by themselves so what we ended up doing is we’re revisiting the program and they actually trained three nights a week. “So Monday, Wednesday, Friday in four different satellites, alongside the boys, integrated within their program so they did their warmup and their hands together, and I think the benefit that we’ve seen from a club perspective but also from fitness testing it was definitely the best decision.”

Gippsland has one AFL Women’s National Academy member in Megan Fitzsimon, who has spent a week with North Melbourne and travelled to Darwin for the Academy’s pre-season training camp. Caple said on-field leadership through through those programs will improve even more, and noted another surprise packet to keep an eye on was Phillip Island’s Grace McRae who has developed at an impressive rate and worked hard to improve her game. McRae initially approached the Power crossing from netball and once she worked out what she had to do switching the round ball for the oblong one, caught the eye and has not rested on her laurels, training with her local boy’s team simultaneously with the Power.

The Power have opted to bring back three 19-year-olds in 2020, with Caple identifying a “two-year gap” with plenty of talent filtering through the bottom-agers, and experience crucial in such a young side.

“Shanara Notman‘s coming back on to our list after playing some games with Casey VFL; Leyla Berry, who played with us two years ago, alongside Tyla Hanks had a year off and decided to come back,” Caple said. “And Charlize Bird, so Charlize was one of our top ages last year who had a shoulder reconstruction and just probably didn’t get the most out of her development and as many opportunities as we would have liked her so we’ve been able to bring her back. “We think those three will add a lot of maturity to our program, and hopefully be able to guide the younger girls as well to maintain the standards that we have.”

Notman played in defence for Gippsland last season, returning late in the year after injury saw her miss most of the season. A starring role rebounding off half-back against Calder Cannons in the final round caught the eye and the former basketballer was invited to represent Vic Country at the AFL Women’s Under-18 Championships. There, she played as a forward and showed she could fulfil multiple roles on the field, something that gives the Power a good problem to have.

“I think she’ll (Notman) probably mix both (defence and forward),” Caple said. “I know Scott (Armour, Gippsland Power coach) loved her on the half-back line just because that ability for her to read the play from her basketball background is phenomenal. “But then at the same time we want to be able to talk to VFLW and AFLW clubs and see where they want to see her as well. “We think this is a great opportunity for her to maybe show what she didn’t get to last year being injured but she’s also new to the game as well. “So there’s a lot of learning and education that goes with that. “We’re doing a lot of work with Casey and Melbourne now to make sure that she’s in the right environment and she’s supported from a transition perspective as well.”

While the top-agers will gain much of the focus, there are a couple of Under 16s talents that Caple said will feature throughout the season having very different paths in their footballer journey.

“We’re really excited to have Xavier Duursma‘s little sister Yazzie (Yasmin) Duursma join the squad for the first time, so she’s an ’04 born so under 16,” Caple said. “She is an elite netballer, so she’s coming across, I think she will try and juggle the two at the moment. “But we’re really excited and from what we’ve seen from her testing she’ll make the transition perfectly fine. So that’s really exciting to see.”

“Lily-Rose Williamson has won the best on ground in the V-Line for the last three years  and she’s still Under 16,” Caple said. “So she’ll get some more opportunities this year in the Under 18s setting. “We’re really excited about a lot of new ones that we’ve brought into the program that it’ll be their first year in the Under 18 system.”

As for the 2020 focus, it was much the same as every year – development over success. Caple said by developing players to their full potential, it gives them the best opportunity to play at the best level they possibly can, and improving from week to week, rather than focusing on the scoreboard which is what makes the NAB League Girls competition important for the female footballing pathways.

“That measure of success for us is much better than that win to loss ratio, which can be really demoralising at times,” she said. “I think Scott Armour and the rest of the team produced that environment and that culture where the girls can still walk off the field and know that they had fantastic intensity, fantastic pressure. “And so they had little wins in certain elements of the game. “So no doubt Scott will stick to that path. “Hopefully, I can see the girls being competitive, but obviously everyone’s lists are getting bigger and better. “I talked to the other regions and their 04’s are outstanding as well. “So it’ll be a matter of just giving them everything that we’ve got and the best development opportunities for them as people and as footballers.”