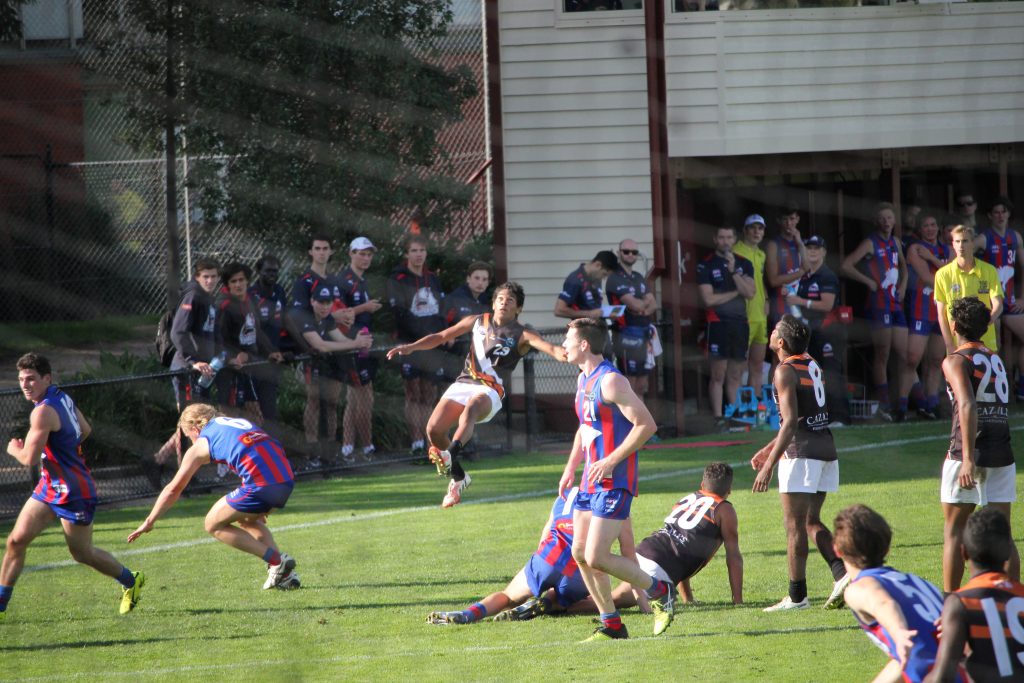 ROUND 16 of the Northern Territory Football League (NTFL) Men’s Premier League threw up little in the way of surprises, with the minor premier, top five, and wooden spooner now officially set with two regular season rounds left to play.

Darwin was made to work for a breakthrough win to get back on the winners list, downing Palmerston on Friday night to lock in the fate of both sides. The 9.17 (71) to 6.7 (43) result secures the Buffs’ safety in the top five and gives them an outside chance of snatching second chance qualification, while consigning Palmerston to a second wooden spoon in three seasons.

Let-offs were the theme of the first half for Darwin, with the Buffs posting a wasteful 4.10 to keep the Magpies in with a sniff heading into the main break, unable to properly capitalise on a territorial advantage. Credit to the Magpies’ defence, they kept a dangerous Buffs attack to no more than three goals per term throughout a contest where majors were hard to come by, with their teammates up the other end also lacking in potency. In the end, Darwin’s 26 scoring shots proved more than enough to build the eventual 28-point winning margin.

The scoreline may not suggest so, but there was plenty to like about Palmerston’s performance; with Keidan Holt-Tubbs moving well in his return to ruck duties, young Sandy Brock doing a phenomenal lockdown job on Darren Shillabeer to lead the back six alongside Michaelis McMasters, and Kyle Emery proving influential through midfield. For Darwin, Ishmael Palmer had a breakout game with three goals, while the returning Ryan Pendlebury was assured in defence and the pairing of Cameron Stokes and Chris Williams took up leadership duties in the absence of skipper, Jarrod Stokes. With notable talent still set to come back into the side, Darwin will hope to get on a winning run heading into finals with Waratah next on the agenda.

Nightcliff kept the status quo as the competition benchmark, securing the minor premiership with a 15-point win over Tiwi to kick off Saturday’s proceedings. The Tigers were ruthlessly efficient forward of centre, making better use of five less scoring shots to run out 16.4 (100) to 12.13 (85) winners.

It was a case of leading at the right time for the reigning premier, which stormed ahead in a six-goal to two final term to overrun and outgun the typically potent Bombers. Earlier, Tiwi had maintained a one-to-two goal margin across most of the contest to lead at each of the first three breaks and set alarm bells ringing for Nightcliff. But it only served to kick the Tigers into action as they mounted their impressive final term surge to overcome Tiwi for a third time this season. While the Bombers fell short in a true test of their premiership credentials, they looked right up to the task in what was a cracking contest.

The Tigers put their usually deep scoring spread on hold for this task, instead leaning on a pair of six-goal hauls from Liam Evans and Liam Holt-Fitz, while competition leading goalkicker Trent Melville could only manage one major. The reliable Cam Ilett and Nathan Brown both featured among the best for Nightcliff, while bigman Kyle Winter-Irving also worked hard. For Tiwi, Austin Wonaeamirri (three goals) led the scoring charge, with fellow multiple goalkickers Harley Puruntatameri (three) and Ross Tungatalum (two) named among the best for their efforts behind midfielder, Nathan Djerrkura. The tests do not let up for Tiwi as another meeting with St Mary’s is up next, while Nightcliff will look to compound the misery on Wanderers.

St Mary’s all-but officially secured second spot with a 28-point win over Waratah on the road, overcoming a slow start for the second-straight week to come out comfortable winners. A second-term lapse proved the Warriors’ downfall in the 13.10 (88) to 9.6 (60) loss, dashing their thin finals hopes in a flash.

A promising opener which saw Waratah earn an early 11-point buffer was soon discounted by St Mary’s seven-goal to nil second stanza blitz, stamping their authority to set up the eventual winning margin. The Saints’ scoring steadied after half time, but their lead proved unassailable in the second half as Waratah could not quite muster up the points required despite outscoring its finals-bound opponent over that time.

St Mary’s recruit Jackson Calder booted a game-high four goals to lead his side’s scoring effort alongside usual suspects Shannon Rioli and Leroy Larson (both three goals), but none of the six Saints goalkickers featured among the best. Shaun Edwards and Jake Long’s AFL experience boded well as they had a big impact, while Rhett Jordan and Thomas Davies continued their impactful runs of form. For Waratah, Jae McGrath boosted his fortnight tally to eight goals with a team-high bag of three, while Henry Kerinaiua also found the big sticks with usual spark Kim Kantilla kept goalless. Both sides will move on next week to top five opponents, with St Mary’s anticipating a grudge match with Tiwi while Waratah resumes its own rivalry with Darwin on Friday night.

Southern Districts wrapped up the top five race with a comfortable 39-point win over Wanderers, handing the Eagles a tenth-consecutive loss. The Crocs dined out forward of centre, returning to their typically resourceful best to post a 16.5 (101) winning score to Wanderers’ 9.8 (62).

The signs looked ominous from the get-go as Southern Districts stormed out of the gates to post 11 goals to two in a game-breaking opening half, taking the contest away from Wanderers in an instant. Given the Eagles’ run of lacklustre second halves, they would need something of a miracle to make a game of it and while that did not eventuate, the young side still managed to outscore the Crocs after half time and keep them scoreless in the final term.

Will Farrer bounced back from a rare goalless outing to boot a game-high four goals, backed by the the returning Ed Barlow (three goals) and supplied well by another returnee, Michael Barlow from midfield. For the Muk Muks, ex-Croc Shane Thorne was named best for his one-goal effort, with Simon Bates also featuring among the best for his three majors. While the Eagles simply did not have enough for the potent Crocs, their ability to not get completely blown away after a shoddy start should put them in good stead. The going will only get tougher for Wanderers in Round 17 though as Nightcliff is next on the fixture list, while Southern Districts will hope to continue its winning form heading into finals in a match-up with Palmerston.