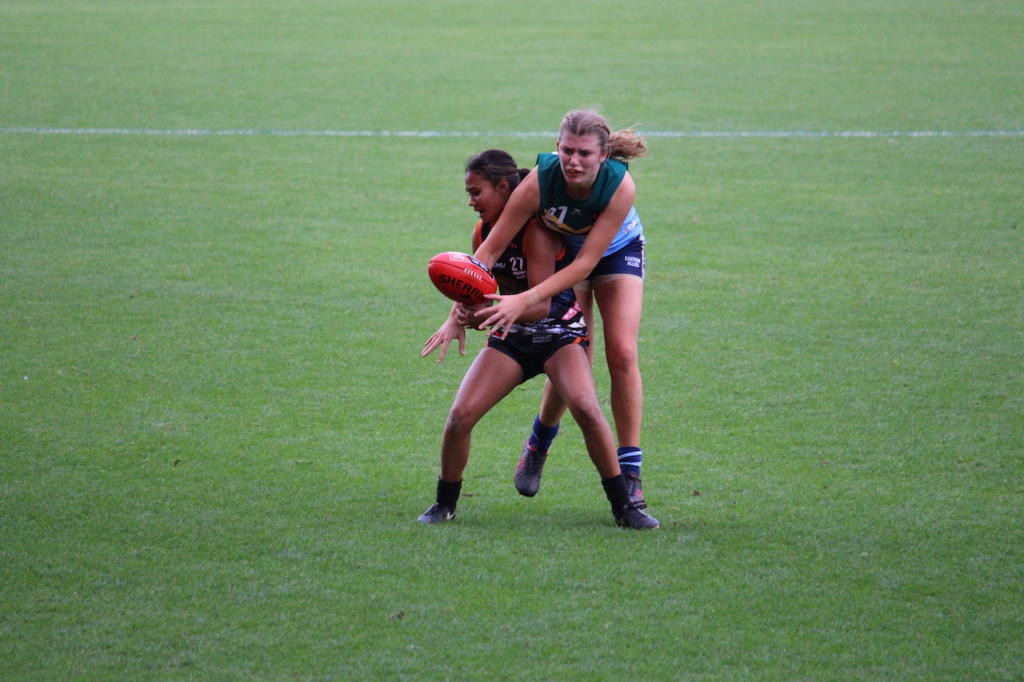 ROUND 15 of the Northern Territory Football League (NTFL) Women’s will see plenty of exciting matches, with this round ultimately heating up the race to finals with only four matches left in the season. With a relatively even ladder this season, every team from fifth to eighth on the ladder could still realistically make finals with wins to finish the season. Though still an outside chance, with fifth and sixth only two wins ahead of seventh and three ahead of eighth, the likes of Nightcliff and Wanderers will need to take every opportunity they have to ensure they don’t get forced out of finals contention.

Big River Hawks have unfortunately withdrawn from the competition after player unavailability lead to three successive forfeits, breaching AFLNT regulations. All teams scheduled to take on the Hawks over the next four rounds will receive byes, with Palmerston Magpies sitting out this week.

Tracy Village will have a tough one this week when they open the round, taking on Southern Districts at home to hopefully get their third win on the board for the season. Sitting in third, the Crocs will want to bring back some of their early-season consistency to breach the top two, only sitting one win behind the Buffettes and realistically with a good chance to rack up some more wins to end the season on a high. Last time these sides met the Crocs only conceded one behind for the match, meaning that they will look to continue that form but will also have a hungry Razorbacks outfit to contend with up forward to go one better than their Round 5 efforts. Tahlia Holtze and April Lewis will look to continue their solid form for the season, collecting six and four bests nominations respectively, while Ebony Miller is sure to make an impact with 37 goals on her tally for the season so far. Lisa-Maree Toner has been consistent for the Razorbacks despite the side’s slow season, while Gabrielle Young will hope for another solid match on the board.

In the second match of the round the seventh-ranked Queen Ants will take on the eighth-placed Saints in what is the closest match of the round, with both sides needing wins over the coming weeks to catch a glimpse of finals contention. Based on their percentage Pint should get the chocolates this time around despite St Mary’s getting the win last time they met, with a better win rate and ability to put points on the board. But the Saints cannot be discounted, with some solid form this season with an ability to score quickly, making for a massive contest. For the Saints, Nikita Long will hope to continue her consistency on the field with 13 matches under her belt for the season while Sharna Edwards will want to put her best foot forward under pressure from Pint. For the Queen Ants, Jasmyn Hewett, Casey Morris and Jessie Baumer have been solid options inside 50 while the likes of Emma Greaves and Erin Hetherington have impressed throughout the season, steadying the side throughout.

Nightcliff will need to be at their best this round when they take on the Buffettes who have returned to their early season form with impressive wins over the past two weeks. Last time they met the Buffs reigned supreme in a 31-point victory, with the side well and truly on a roll with victory making for an interesting matchup this time around given the Tigers are currently on a three game winning streak, including one against the reigning premiers and ladder-leaders, Waratah. Only sitting two wins behind Darwin and with plenty of talent at their disposal, Nightcliff will want to prove they have what it takes to go far this season with a win against the second-ranked Buffettes. Nightcliff high-flyers, Eliza Morrison and Emma-Lou Wolsey will want to continue their combined stellar form, with the pair both picking up nine best on ground nominations this season so far. The likes of Mickayla Ward and Jacqueline Anyon-Smith have some real firepower between them so will hope to put some real pressure on the scoreboard, while plenty of other forwards are also able to have an impact. The Tigers will have a hard time stopping the likes of Kylie Duggan and Tayla Hart-Aluni who are as consistent as they come, especially in a side of dominant performers.

With a week off last round, Waratah will be out for blood against sixth-ranked Wanderers who are sitting in a similar position to Nightcliff, needing wins over the next few rounds to ensure a finals berth. Last time these sides met the ‘Tahs came out on top with relative ease in a somewhat inaccurate clash, booting 12.10 (82) to Wanderers’ 5.7 (37). Waratah will want to continue their impressive form heading into the last few rounds of the season to remain at the head of the ladder and with a plethora of forward options the Wanderers will have their work cut out for them defensively to try and stem the flow long enough to get a ninth win on the board. Wanderers’ Shekeine De Satge and Morgan Johnston have been stellar throughout the season, both earning nine best on ground nominations for their efforts. De Satge is the leading goalkicker with 13 for the season so far, so will hope to add to her tally this week against a tough opponent. Waratah’s Lauren O’Shea, Jenna Singh and Lisa Roberts will look to add to their respective goal tallies for the season, having combined for 41 goals and 14 best on ground nominations this season.