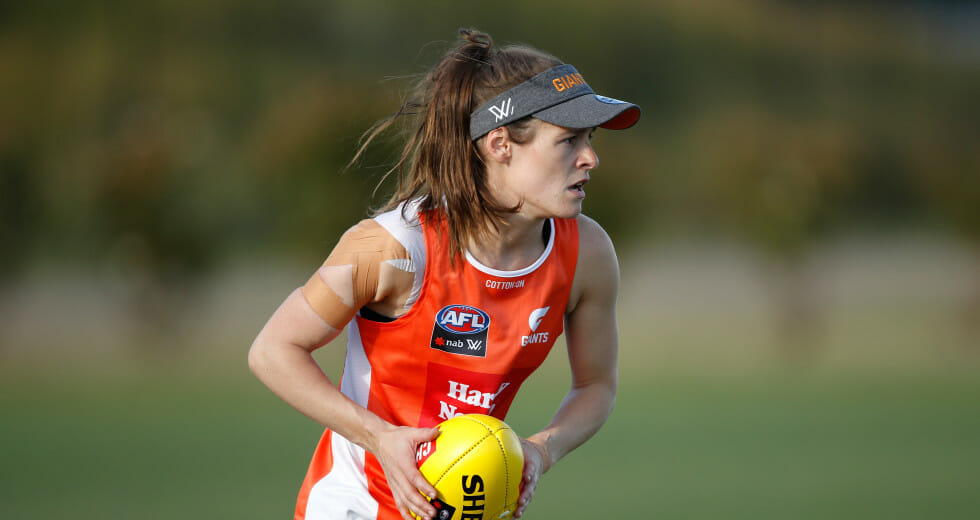 THE Giants were dealt some hefty blows over the off-season with a multitude of big name players departing the club to join expansion clubs with the likes of star Courtney Gum and Christina Bernardi headlining the departures. Captain Amanda Farrugia also announced her shock retirement leaving many onlookers stunned by her decision. But the Giants will back themselves heading into season 2020 with a new look line-up filled with youth. Since their inception the GIANTS have shown glimpses of brilliance, able to string together some handy performances. Despite only winning two games last season GWS finished third in their conference and will be hoping to go one better this year and claim a spot in the top two.

It is hard to deny the impact Eva has across the ground with her on-field leadership and football smarts. The newly appointed captain will have a point to prove and is a real general helping to set up plays and move the ball with ease to create forward forays for her side. She is clean with ball in hand and is not afraid to get down and dirty. Eva is never far from the contest and has good vision, able to sight a player in space and deliver a pass lace out such is her high calibre. She is as versatile as they come, able to fulfil any role given to her and complete it at the highest level possible whether it be down back or in the midfield thanks to her impressive skill-set and footy mind.

Garnett is a potential shining light for the Giants who have been shelled of experience. She is a classy mover and good decision maker but still has plenty to develop with the youngster still perfecting hr craft. She can play up either end credit to her strong hands, lead up at the footy and general footy nous making her a promising prospect for the Giants. Her love to run is evident in her game play willing to take the game on and put on the afterburners.

After a breakout season in 2019 the 20-year-old will be looking to improve on her form and continue to be a threat in the forward 50 and midfield. With greater exposure to the top echelon of players and an innate ability to find the ball Parker is shaping up to be a key contributor for the Giants in 2020. She can win her own ball and is always involved around the stoppages looking for any chance to extract the footy and send it forward. Parker is clean by hand, often able to spot a teammate and deliver a well-executed handball or kick out of congestion making her a real force to be reckoned with for the Giants.

The Giants will be forced to travel quite a lot this season with no back-to-back home games but are lucky to avoid the trek across to Western Australia, with the Eagles traveling to New South Wales instead. In Round 6 they face the reigning premiers in Adelaide who will be using their home ground advantage to full effect while also travelling to face the 2018 premiers in Round 8 making it a difficult end to the home and away season for the Giants.

Prediction: 4th/5th in Conference A

It will be a challenging season for the Giants who have landed in a stacked conference with reigning premiers, Adelaide, previous finalists, Brisbane and not to mention North Melbourne. Although the Crows and Lions are down on their stocks they still have plenty of class and know what it takes to win on the big stage. The Kangaroos were favourites to take out the title last year but fell away towards the backend of the season and will be looking to go one better this year. Although the Giants have some key players in Eva, Jessica Dal Pos, Rebecca Beeson and Nicola Barr it will be difficult for them to match the high calibre of the three aforementioned teams. Add into the mix Richmond who have recruited a host of A-listers and 2020 could see the Giants miss the finals once again.