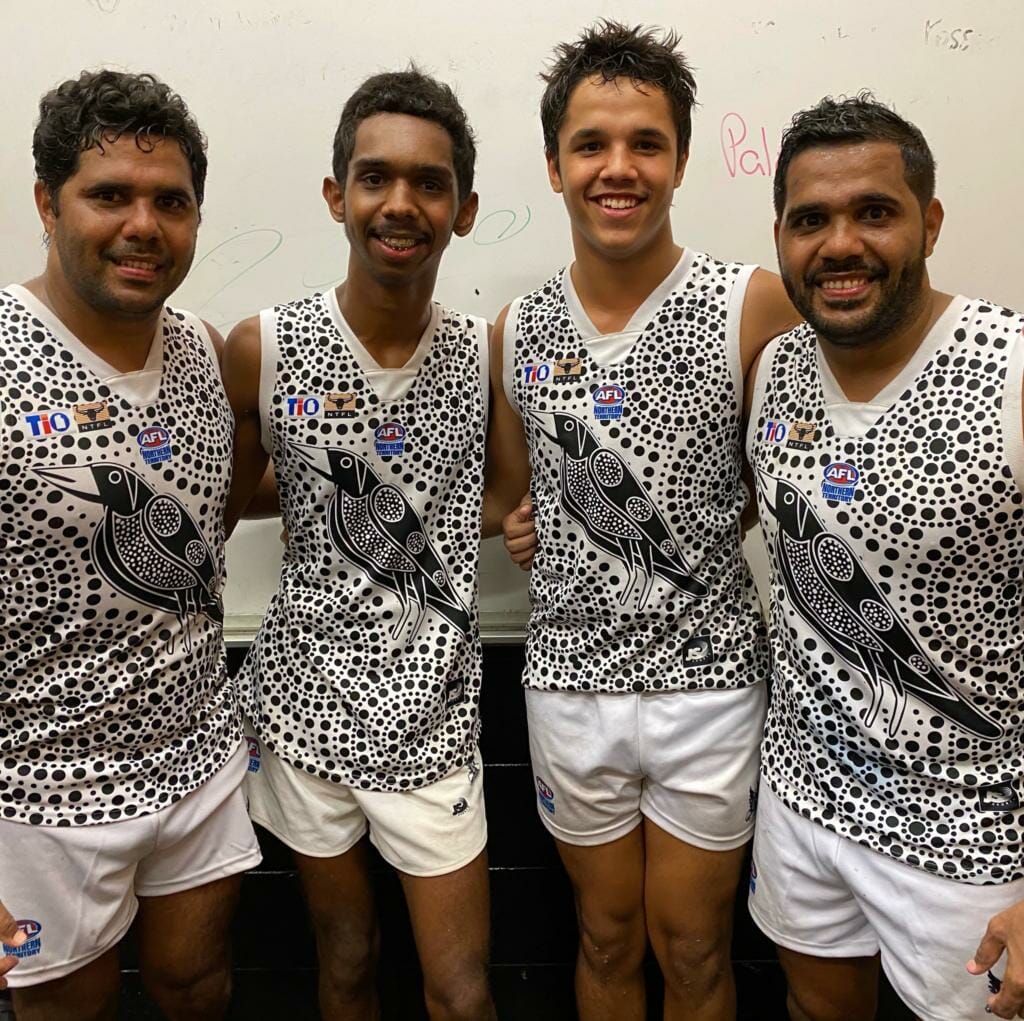 PALMERSTON’S maiden win of the 2019/20 Northern Territory Football League (NTFL) Men’s Premier League season headlined an otherwise straightforward round of action, with Tiwi rising to third and the top two sides separating from the trailing pack.

Tiwi continued its rise up the NTFL ladder on Saturday, thumping Waratah by 57 points to jump two places into third spot. The Bombers were too slick on the outside, running away in the second half with a clinical 23.9 (147) to 13.12 (90) victory.

While four-goal hero Kim Kantilla posted the game’s first goal for Waratah, it was all Tiwi immediately after as an Austin Wonaeamirri double spurred the Bombers to the next six majors. Harley Puruntatameri also wreaked havoc inside forward 50 with two classy finishes of his own, but Waratah pegged the margin back late with four unanswered goals to trail by a sole goal at quarter time. A slower second term did not stop Tiwi from again kicking away with the final three majors of the stanza, before the Warriors mounted another comeback after the main break via some more Kantilla magic. The margin got back to within a goal, but Tiwi again had the legs to finish the term and doubled its 32-point three-quarter time lead to run out comfortable winners.

Tom Bell joined Puruntatameri with a bag of five goals come the final siren, and Tiwi’s best half dozen had a distinct Greensborough feel about it as Bell’s Northern Football League teammates Charlie Molyneux and Nick Riddle were also named. The likes of Molyneux were fed all day by bigman Jack Monigatti, with the pair combining for the South Australian’s first term stoppage goal. For Waratah, Kantilla’s solo efforts going forward were terrific alongside Henry Kerinaiua, who bagged three goals, while the returning Abe Ankers also made a difference moving forward. But the Warriors’ win over Tiwi in Round 6 seems a world away now, with the Bombers mounting a top two charge while Waratah battles to be the best of the rest.

The four points were gained amid some scrappy exchanges, most notably in the first term where the sides could only manage a goal apiece. Josh Innes‘ goal after the quarter time siren put the Crocs two points to the good, and the second quarter produced a similar story – albeit with more scoring. Just as quickly as the Saints got on a three-goal run, the Crocs bounced back with four of their own to again snatch the lead at the second break by under a goal. But it was the third term where the tide started to shift as St Mary’s got on top, only to be discounted by some energy from resting midfielder Josiah Farrer inside forward 50, which kept Southern Districts well within striking distance. It was tit-for-tat in the final term as a fourth Farrer snap kept the margin at five points at the midway point, but St Mary’s strength across the ground and superior legs got it over the line.

While his brother, William leads the Crocs’ goalkicking tally, Josiah Farrer was Southern Districts’ source of inspiration in front of the big sticks with four opportunistic goals. It was otherwise all single goalkickers for the Crocs, who could not make full use of Michael Barlow‘s ball winning prowess further afield. The Saints were led up forward by Joseph Salmon and ex-GWS utility Shaun Edwards, who booted three goals apiece while Jackson Paine and Jacob Long were also impressive. A chance to knock Nightcliff off for a second time looms for the Saints, who can make the minor premiership race interesting with the right result. Meanwhile, the Crocs continue a trying month with assignments against two top three sides next up as they slip down to fourth, as wins become paramount for finals positions.

Palmerston broke through for a much-deserved maiden win of its 2019/20 campaign, outlasting Wanderers to come out eight-point winners. The Magpies were made to earn it too, trailing at the first two breaks before hitting the front when it mattered in the 14.9 (93) to 13.7 (85) result.

As has been the case for most of the Eagles’ season, they started brightly and found their way in front with three goals in each of the opening two terms. But the two-point half time margin was not nearly enough as they began to run out of legs, with Palmerston determined to earn its first set of four points. A nine-goal second half helped the Magpies to their highest score for the season, good enough for that elusive first win with another bottom three side next on the agenda.

There was somewhat of a family theme across both camps as three of Palmerston’s Daveys – Alwyn, Alwyn Jnr, and Russell lined up against Wanderers’ five Motlops and three Jeffrey brothers – Jordan, Joel, and Jai. AFL Academy member and Gold Coast SUNS trainee Joel Jeffrey was by far the pick of the bunch, booting a game-high four goals to lead the Muk Muks’ scoring effort alongside fellow youngster Beau O’Connell (three goals). The two were named their sides’ best players, with Keidan Holt-Tubbs claiming that honour for the Magpies on the back of another bag of three. Kyle Emery was another difference-maker as he returns to his best form further afield, while playing-coach Alwyn Davey was also influential. The Magpies will fancy themselves to make it two-consecutive wins against Waratah next time out, while Wanderers will have to face Darwin in hopes of snapping a seven-game losing run.

An untimely power outage saw Nightcliff only have to work for a little over three quarters to earn its twelfth win of the season, downing Darwin by 33 points on Saturday night. But the Tigers were well on top as the lights went out on Darwin’s chances of a comeback with 17 minutes gone in the third term, gifting the 12.8 (80) to 7.5 (47) result to Nightcliff with play unable to resume and more than half the game having already been played out.

The Tigers looked ominous from the opening bounce, booting the first three goals of the game before Daniel Stafford chimed in with a much-needed major for the Buffs. But it did little to thwart the ladder leaders’ momentum as they quickly extended a 25-point quarter time lead to 37 early in the second stanza. Darwin simply could not string goals together as Nightcliff answered every challenge, maintaining that five-to-six goal buffer all the way to the main break. It proved match-defining, with the goal-for-goal trend continuing right until the game’s premature end.

Stafford proved Darwin’s only real form of resistance as he snagged four goals to edge closer to the top of the league’s goalkicking standings, joined for inspiration inside 50 by skipper Jarrod Stokes. The man at the top of those standings is Nightcliff’s Trent Melville, who added three goals to his tally alongside the electric Liam Holt-Fitz and consistent Lachlan Sharp, proving the winners’ superior firepower. But it was Brodie Filo who was named the Tigers’ best afield, with bigman Kyle Winter-Irving also impressive. Nightcliff will go on to face the only side it is yet to beat in St Mary’s, while Darwin will look to rebound against Wanderers with a leaner month ahead.